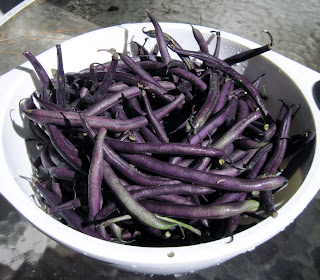 I'd never seen or heard of "purple" beans until I found them in my CSA produce box. According to the flyer that came from the farm, they're merely a purple version of ordinary green beans (string beans), and they naturally turn green as they cook. That latter bit did not surprise me, as I had received some purple okra from a friend last summer and it, too, turned green during cooking.

The following should hardly be called a recipe because I simply threw it together using ingredients I had on hand -- in other words, it's "throw cooking," which refers to a cooking method or philosophy, usually based on traditional Southern or country cooking.

If you don't have bacon ends, you could certainly substitute chopped thick-cut bacon, fatback, or even chopped country ham (if the latter, you probably will need additional fat for sauteing). Likewise, the quantities reflect what I had available; you can adjust them to suit your needs and amounts on hand.

2 lbs purple beans (or green beans or string beans), washed & ends snapped off
2 cloves garlic, minced (I used green garlic, which is stronger)
Half of a small onion, chopped
4 to 6 oz. bacon ends (or equivalent bacon or fatback)
Salt & pepper to taste

Bring a large pot of salted water to a boil (leave enough room for the beans to fit without sloshing water out), then plunge in the beans and bring back to a boil. If you're using purple beans, they'll soon turn green. Let the beans boil for 1 1/2 to 2 minutes depending on how crisp/tender you like them, then drain into a large colander and immediately rinse with cold water until cool to the touch (this will stop the cooking process and brighten the green color). 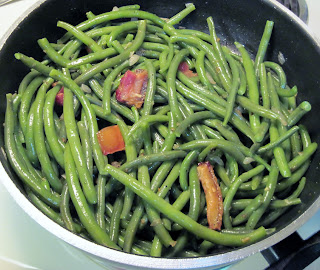 Brown the bacon ends in a large, deep skillet over medium heat. Add the garlic & onion and saute until light golden (the pork will finish cooking during this time). Add the drained beans, season with salt & pepper to taste, stir and cook until heated through, about 2 to 3 minutes. That's it!

PS:  If you like spicing up your string beans, a nice vinegar pepper sauce like Texas Pete Hot Sauce (which is actually a North Carolina hot sauce despite the name), or Tabasco Sauce will add Southern style tangy heat.