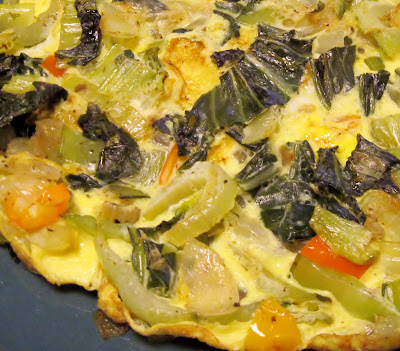 Pak Choi, or bok choy if you prefer, is a common Chinese cabbage with long, usually white stalks and broad, green leaves. Most frequently served stir-fried in American-Chinese restaurants, it can also be chopped and sauteed like any other kind of leafy green. Both the leaves and the stems are edible, with a mild flavor that hints gently at its relation to the more strongly flavored cabbages used in American recipes.

Instead of preparing an Asian recipe with the small head of pak choi that I had received as part of my CSA delivery, I decided to use it in a frittata.

Because I was cooking only for myself, I decided to make a "frittata for one" to serve as my main course. As a result, the following bok choy frittata recipe is for 1 or 2 people, unless you're serving it as part of a larger brunch menu in which case you can cut it into 4 wedges.  If you want to make 4 full-size servings, simply use a large head of pak choi (or two small ones) and double the remaining ingredients. 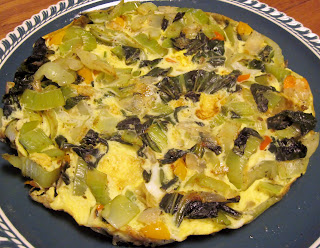 *If you enjoy hot & spicy foods, you can substitute a hot pepper for one or both of the sweet peppers

Wash & trim the pak or bok choi, then chop the stems & leaves separately (because they cook at different rates). Melt the butter or heat the oil/fat over medium heat in a shallow lidded saucepan (I used a 2-quart 2"-high saucepan). Add onion and saute until translucent. Add pak choy stems and chopped peppers and saute until just tender. Stir in the chopped leaves, cover and cook until tender, stirring once or twice (this should take only a couple of minutes because covering the pan helps the leaves steam).

While the vegetables are cooking, beat the eggs and season to taste with salt & pepper (and herbs if using). When the pak choi leaves are wilted and tender, uncover the pan, spread vegetables evenly over the bottom of the pan, and carefully pour in the egg mixture, making sure it spreads evenly over the vegetables (you can tilt the pan slightly to help spread the eggs). Cover pan, reduce heat to low-medium and cook until set, about 5 minutes. Uncover, carefully flip the frittata (I place a large plate face-side down over the top of the pan, firmly grasp the handle and quickly flip the pan over so that the frittata releases onto the plate, cooked-side up), then gently slide the frittata back into the pan, cooked-side up to cook the other side. Let cook for about 2 to 3 minutes, remove from heat and serve.

PS: Frittatas pair nicely with tomato salsa as well as with ketchup, and you'll find some of the best at the Carolina Sauces online store.