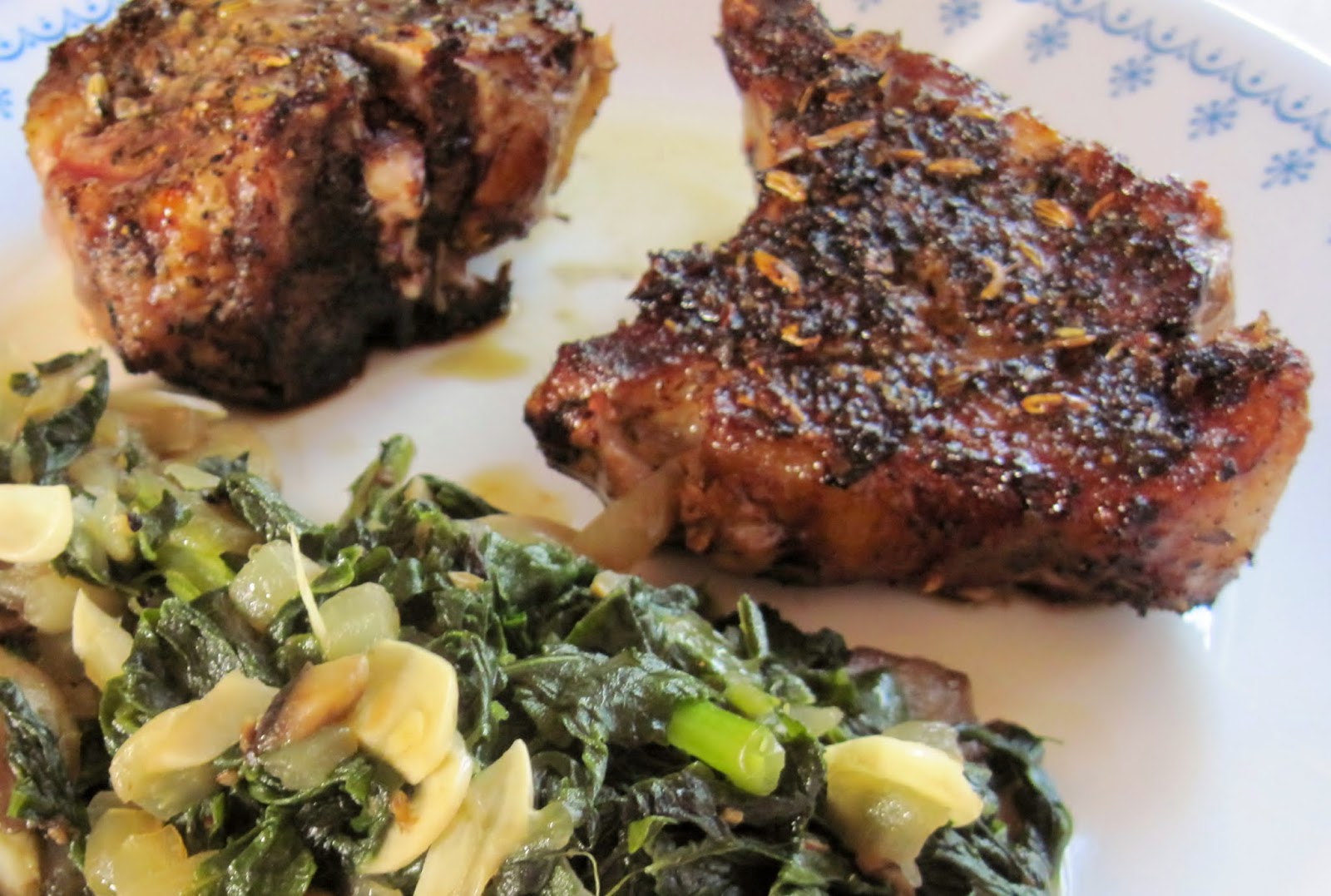 A well-seasoned cast iron skillet is a must for the following recipe, as are the best pork chops you can get, ideally from a small farm specializing in heirloom hog breeds rather than your standard mass-produced pork chop found in supermarkets and even most butcher shops. But if "fancy" pork chops aren't in your budget, or aren't available in your area, don't fret: The following cooking technique and seasoning blend will bring out the very best in any pork chop.

When selecting pork chops, I prefer bone-in chops with a nice amount of fat, especially if from an heirloom hog. Here in Montana, the Bozeman food co-op had guinea hog chops -- no, not guinea pig, although from the diminutive size of the chops I did wonder for a moment if they had come from an overgrown, cuddly guinea pig. Guinea hogs are a rare breed of pig that's unique to North America and known for its small size, and they produce a rich, deeply flavorful meat. You can read more about guinea hogs here.

There are no ingredient quantities for this recipe because it works for any number of pork chops and you season them to taste. This recipe is all about technique, and about the quality of the ingredients.

Heat your cast iron skillet on high until you can feel the heat radiating from it and it has barely begun to smoke -- you'll want to have your kitchen well-ventilated by opening windows if practical, running any vent fans, and probably disconnecting your smoke detector. While the skillet is heating, go ahead and preheat your oven to 350°F, pat dry your pork chops and place them on a plate, then season the top side of the chops with the herbs & seasonings, using your fingers to sprinkle them evenly, liberally applying the salt & pepper and following your taste preferences for the remainder of the seasonings. I recommend going light on the fennel seed and rosemary because of their strong flavor. Gently pat the seasonings onto the chops with your fingers, without rubbing.

When the skillet is smoking-hot, use a bundled up paper towel or piece of brown paper bag to smear on the grease or oil, working quickly to coat the skillet generously and evenly. Let that heat for a few seconds until almost smoking, then carefully place the chops in the greased skillet seasoned-side down, and then LET THEM BE for 90 seconds to 2 minutes (the latter for very large or very thick chops). Resist the urge to disturb the chops because doing so will prevent them from searing properly.

While the chops are searing, season the exposed side of the chops in the same manner as you did the first side. When the 90 to 120 seconds have passed, carefully flip the chops over to sear the other side, again letting them cook undisturbed for 90 seconds to 2 minutes. After that allotted time, turn off the burner and carefully place the skillet with the chops in your preheated oven. Let the chops cook in the oven at 350°F for 25 to 30 minutes or until they reach an internal temperature of 145°F using a meat thermometer -- don't touch the bone with the probe or you'll get a false reading.

When the chops are done, remove skillet from oven and serve the pork chops. Enjoy!

PS: If you want to save time, you can season the pork chops simply with salt & pepper, or with a good pork seasoning blend that has little or no sugar, such as Stubb's Pork Spice Rub, Historic Lynchburg Tennessee Whiskey Seasoned Salt or PETA Barbecue Seasoning, then use the same cooking technique for searing and finishing in the oven.

PPS: If you're curious about the greens served with the pork chops in the photo at the top of this post, stay tuned because that recipe will be available on this blog in the very near future.