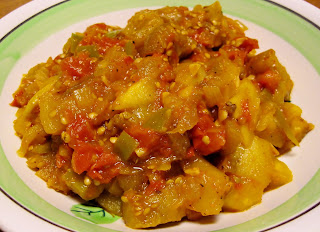 I have no idea if eggplant is prepared this way in India, but I wouldn't be surprised if there's a similar authentically Indian recipe for eggplant. Regardless, this Indian-inspired spicy eggplant is a flavorful and flavorful (not overly exotic) vegetarian dish that can be served as a stew with some pita or naan, or spooned over rice, pasta, couscous or quinoa. Roasting the eggplant produces a very mellow, almost sweet flavor that will convert even the staunchest self-proclaimed eggplant hater.

Although I usually don't go through the trouble of salting eggplant -- and it never tastes bitter to me despite not salting -- I did it this time primarily to reduce the amount of oil the eggplant would absorb. In case you didn't know, eggplant is like a sponge and will soak up ridiculous amounts of oil during cooking, which can produce soggy, greasy results unless you're really careful. Salting the eggplant is supposed to extract bitterness, and it certainly draws out moisture while rendering the eggplant less absorbent.

One final note: If you cannot find ghee (it's a clarified butter sold in Indian markets, ethnic shops and specialty grocery stores like Whole Foods) or if you're a vegan, substitute your favorite cooking oil for the ghee. I don't recommend olive oil because of its distinctive flavor, unless you're using a "light" olive oil.

*It's easy to make this Indian spice blend at home if you follow my recipe for Garam Masala, which you'll find towards the end of that old newsletter post.

Note:  I learned the following salting and roasting method from the cookbook titled Greene on Greens, by Bert Greene.

Trim the stem end from the eggplant, then slice in half lengthwise. Carefully cut slits lengthwise into the pulp without cutting through the skin. Place the eggplant halves in a large colander in your sink, sprinkle generously with salt, and let sit for half an hour (you will see beads of water forming on the eggplant pulp as the salt draws out moisture). After 30 minutes, use paper towels or even a scrunched-up piece of brown paper bag to gently brush the salt off the eggplant and blot the released liquid to pat the eggplant dry. To remove more liquid, you can very gently squeeze the eggplant halves.

Preheat oven to 350°F and lightly brush the top of the eggplant halves with a Tablespoon of melted ghee or some oil. Place the eggplant skin-side down in a baking pan or roasting pan, pour about 1/2" water around (not over) the eggplant, and bake until the eggplant is tender, about 30 to 40 minutes. Remove from oven and carefully place the eggplant slices upside down (skin side up) on cooling racks either in your sink or on your counter with paper towels underneath to let the eggplant drain as it cools.

While the roasted eggplant is cooling, heat 1 Tablespoon of ghee or oil in a large skillet over medium-high heat, then saute the onion and garlic until soft and translucent. Add the pepper and saute until softened. Add tomatoes and garam masala, stir well, reduce heat and cook at a low simmer until the tomatoes have broken down.

When the roasted eggplant is cool enough to handle, use a large spoon to scoop the pulp from the skin, scraping the skin to remove all of the pulp. Discard the skins and coarsely chop the eggplant pulp. Stir the chopped eggplant into the tomato mixture and keep at a low simmer, stirring occasionally, until the eggplant is fully cooked and buttery-soft, about 15 to 20 minutes. Taste for balance and season with a little salt or more garam masala if desired. Serve hot. Refrigerated leftovers can be reheated or enjoyed cold, and the flavors will continue to develop and improve overnight. Makes 3 to 4 servings.