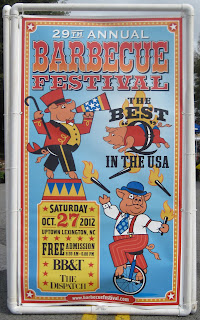 The 29th Annual Lexington NC Barbecue Festival was held yesterday in charming uptown Lexington, North Carolina, which is located in the Triad region (near High Point, Greensboro & Winston-Salem) of the state. Despite having lived in NC for almost 30 years, including 5 of them in Winston-Salem, I had never visited this festival--although I have eaten at several excellent BBQ joints in and around Lexington over the years. At long last, I finally was able to attend yesterday's event, and did so with the expectation of a celebration of all things barbecue with offerings from some of the area's most celebrated restaurants.

I was sadly mistaken, and as a result, disappointed.

Don't get me wrong, there was barbecue at the Lexington Barbecue Festival, but only at three large "barbecue tents" dishing out mass-produced (albeit wood-smoked) chopped BBQ. Choices were limited to BBQ sandwiches and BBQ trays, both with a helping of Lexington's signature red slaw, and for an additional few bucks you could get a cup of "pig tails" aka curly fries. The tents were closed off with plywood walls, with "bank teller" style openings through which you would order and pay, and receive your food. It was rather disconcerting to me that I could not see past the "teller" to glimpse at the food before receiving my order. There were NO other vendors serving up barbecue; instead, you had your typical selection of carnival and fair food ranging from funnel cakes and deep-fried candy bars to giant turkey legs, roast corn, sausage, and a few unusual (for a street festival) items like crab cakes and French style apple desserts.

Having driven almost two hours to get there, we were NOT going to leave without eating some barbecue, so we decided to make the best of a disappointing situation and ordered the BBQ tray from one of the three large tents. Here is what we got: 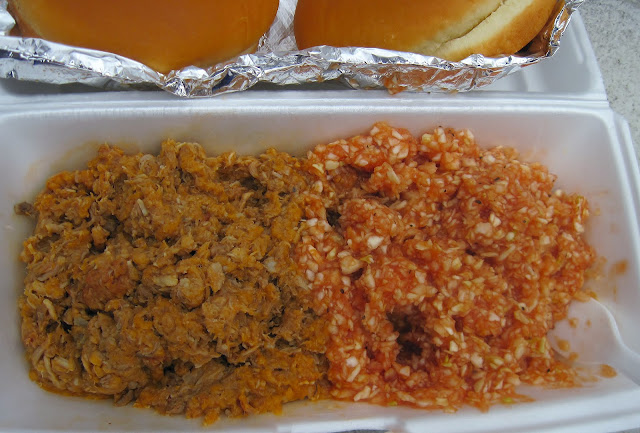 This was more than enough to feed two hungry people, and by carnival-food standards the barbecue was actually quite good (although nowhere near the quality of what you'd expect at the best BBQ joints). The pork had indeed been slow-smoked over wood, with tell-tale crunchy bits amid the tender, subtly smoky chopped meat, and the seasoning complemented the pork without calling attention to any individual spices. Surprisingly, there was no additional barbecue sauce to be seen anywhere for those of us who like to add some to the pork. The red slaw was the real star, at least for me given my preference for Piedmont or Lexington slaw. This was crisp, finely chopped cabbage mixed with western NC barbecue sauce instead of mayonnaise, for a bright and tangy, slightly sweet flavor hinting at the blend of tomato and vinegar that defines Lexington style barbecue sauce (an excellent example of this type of sauce is Jim's Own Homestyle BBQ Sauce).

Having enjoyed some authentic, if not fantastic, local barbecue, we spent a few hours wandering the well-attended festival, watching the entertainment and checking out some of the vendors... in other words, making the best of situation that didn't meet our original expectations.

The event was much more of a typical small-town street carnival with local arts and crafts for sale, a few companies selling NC barbecue sauces and other North Carolina products, plenty of other merchandise for sale, some kiddie rides and a rather intense-looking corn hole tournament, several stages with live music, and the aforementioned carnival food. A juggler and a few costumed "mascots" also meandered through the festival. If you wanted to, you could watch vendors frying up pork rinds and making old-fashioned deep-fried apple pies, and then enjoy these snacks piping-hot and fresh from the fryer. 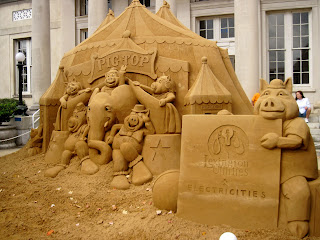 The only evidence of the festival's barbecue theme were the giant sand sculpture featuring cartoon pig characters, a fenced-off area where pig races were to take place (like the ones at the State Fair), and several large signs/directories for the festival. Even the three large tents serving barbecue were rather nondescript and tucked down side streets, most likely to cut down on congestion from the tens of thousands of attendees.

After seeing everything there was to see and visiting with our friends from Nephew's BBQ Sauce, we hit the road back to Durham--but stopped for an early dinner at Allen & Son Barbecue to satisfy our craving for the kind of slow-smoked, swooningly good pulled pork that we had hoped to find at the festival. 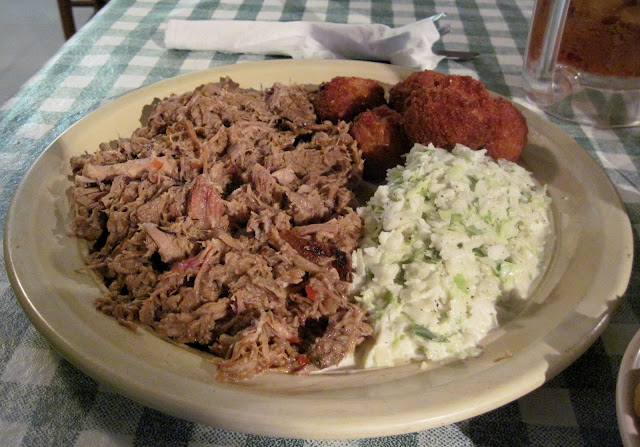 Will I be back for the 30th anniversary of the Lexington BBQ Festival next October? Probably not, if the same format continues. Instead, I might visit Lexington next spring for their barbecue cook-off and competition, where I had better find plenty of what the city boasts to be the best barbecue in the world.