How to Cook Bacon in Your Oven

Email ThisBlogThis!Share to TwitterShare to FacebookShare to Pinterest
Until yesterday, I had almost always cooked bacon in a skillet or frying pan on the stove. The "almost" refers to one misguided attempt at cooking bacon in a microwave oven, said method resulting in unappealingly flaccid, anemic-looking bacon and a greasy mess involving environmentally unfriendly quantities of paper towels.

Today I decided to make bacon in my (conventional) oven, after hearing from friends about this method and finding articles on the internet proclaiming the wonders--or at least the convenience--of oven-cooked bacon. Oven-cooking bacon is touted as easier and less messy than pan-frying because no turning is involved, no splattering occurs, and the resulting flat strips of bacon are ideal for BLTs, hamburgers and other sandwiches.

Being someone who doesn't believe everything she reads on the internet, I approached this experiment with doubt and skepticism, a large roll of paper towels and a fire extinguisher, just in case.

The first decision I had to make was whether to preheat the oven or to turn the oven on only after placing the bacon in the oven. I chose the "cold oven" method  simply because it would take slightly longer and I needed the time to prep other ingredients for the dinner recipe I would make with the cooked bacon.

Next, I had to choose whether to lay the bacon strips on a baking pan, on which they would cook in their own glorious grease, or to place them on a ridged broiler pan or a cooling rack placed over a baking pan so that the rendered bacon fat would drip down and result in "healthier," "less fatty" bacon (which, in my opinion, somewhat defeats the purpose of bacon). Having a sufficiently large oven, I decided to use both methods simultaneously in order to compare the results.

After laying the raw bacon on the foil-lined baking pan and the cooling racks precariously balanced over a pan, I carefully placed both pans on the center rack in my cold oven, turned the oven up to 400°F, and set my timer for 15 minutes. I then left the oven alone while I worked on other things, and resisted the urge to take a peek when the seductive scent of of cooking bacon began to tease my nose. When the buzzer sounded, I checked the bacon for doneness and found that neither set of bacon was fully cooked after only 15 minutes, although the bacon sizzling on the foil-covered pan had made more progress than the strips suspended on the rack. This observation was consistent with what I had read in several articles, most of which called for a 17- to 20-minute baking time when using the cold oven method. Thus I returned the pans to the oven and set my timer for an additional 3 minutes.

When the buzzer sounded for the second time, it took me an additional minute or so before I was able to remove the pans from the oven, so the complete cooking time was probably close to 20 minutes. This time, the bacon looked crispy, with bronzed-pink and golden color, plenty of percussive sizzling (you can see the frothy fat bubbling on the strips on the pan below), and emitting that unmistakable bacon aroma. Below are the results: 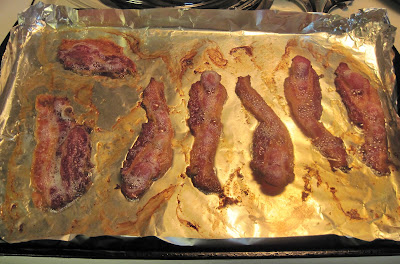 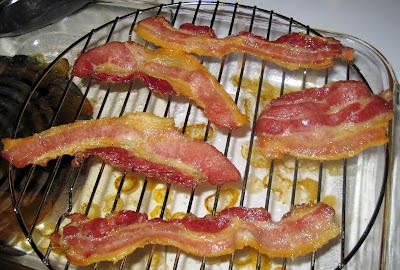 As recommended by various online sources, I immediately transferred the cooked bacon to a large plate lined in paper towels to absorb excess grease.

My observations: To my surprise, the bacon suspended on the racks seemed no less greasy than that cooked directly on the pan in its own rendered fat. The suspended bacon, however, didn't crisp as much as the "oven-fried" bacon in the foil-lined pan, but this difference was minor. Once they were all placed on the paper towels and had "rested" for a minute, it was difficult to tell which strips had been cooked in which manner. 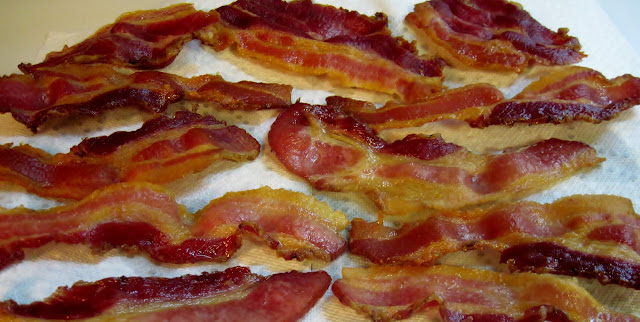 My verdict: Oven-cooking method is indeed quite easy, fool-proof and convenient, especially if your goal is crispy, flat bacon requiring minimal post-cooking cleanup. If effortless cleanup is most important, then forget the rack method and stick with the foil-lined pan. Not only did the rack method require careful handling to keep the bacon from falling through the spaces, but the racks had to be cleaned after cooking. In contrast, the foil kept the pan from getting dirty and I simply lifted out the foil, folded it up to pour the rendered fat into a container, and then discarded the foil. The rack-cooked bacon didn't seem to have rendered any more grease than the pan-cooked bacon, thus eliminating any "health" advantage to the more complicated rack method.

In sum, cooking bacon in your oven at 400°F on a foil-lined pan produces crispy, yummilicious bacon with little effort and virtually no mess--and no fire extinguisher required. Using your oven frees you and your stove to cook or do other things while the bacon cooks. And if your goal is to make flat strips of bacon for sandwiches, definitely forget the frying pan and use your oven. Just remember to start checking on the bacon after 15 minutes of cooking, or sooner if using a preheated oven, because ovens heat up at different rates and vary in their efficiency.

PS: If you can't get enough bacon flavor in your life but don't care for adding more fat or cholesterol to your diet, simply use some of our bacon-flavored sauces and condiments, such as Bacon Hot Sauce or Bacon Ketchup (and we have more coming soon)! And of course we also have the real deal, from old-fashioned dry-cured, hickory smoked North Carolina bacon to many varieties of gourmet, flavored and specialty bacon.