September brought a surprising amount of turmoil on our monthly list of Best-Selling Sauces & Seasonings at the Carolina Sauce Company. Although many of the "usual suspects" in the top five still made the cut, there were a few notable first-timers on the top ten list for last month.

Here's the complete list of September's top ten products, along with a little bit of information on each one to tempt your tastebuds and whet your appetite. To find out more, or to place an order, simply click on the product name or its photo.

1. Wells Hog Heaven BBQ Sauce: North Carolina is known for its pulled pork BBQ and the unique vinegar barbecue sauce that's found throughout the state either with tomatoes in the West or without tomatoes (just vinegar, pepper and spices) in the East. Well's is the quintessential Eastern NC vinegar barbecue sauce, and also our top-selling product of all time. In addition to providing that unmistakeable vinegar tang that complements the smoky flavor of pulled pork, you can also use it as a marinade for chicken or even splashed into collards or on crisp-fried catfish.

2. Matouk's Calypso Sauce: Made in Trinidad & Tobago using pickled scotch bonnet peppers blended with island spices and cane sugar in a rich mustard base, this hot sauce brings genuine West Indian flavor and spice to any savory dish. Use it at the table or in recipes for chicken, meats, fish, seafood, vegetables, rice & beans, etc.

3. Walkerswood Scotch Bonnet Pepper Hot Sauce: Jamaica is the land of fiery scotch bonnet peppers, which are closely related to the habanero and provide the heat in jerk sauces and seasonings. This all-purpose scotch bonnet sauce from Jamaica's best-known sauce company is the real deal, delivering the chili pepper's distinctive burn and bright flavor in a straightforward vinegar base. But don't limit this hot sauce to tropical fare, because its pure peppery flavor will complement anything you'd use a hot sauce on, from pizza to scrambled eggs to hot wings and more. 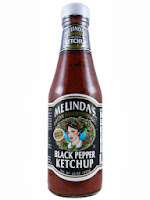 4. Scorned Woman Hot Sauce: This baby gets its name from the famous Shakespeare line, and its scorching burn is indeed furious. Made using several different chili peppers as well as black pepper, and with a savory tang, Scorned Woman is another reliable and versatile choice when you're craving real peppery heat and not some sorry, watered down, overly vinegary excuse of a "hot" sauce from a supermarket.

5. Matouk's Flambeau Hot Sauce: As the name suggests, Flambeau is the hottest of the original Matouk's hot sauces. The primary ingredient is an incendiary pepper mash made from aged choice Scotch Bonnet peppers specifically chosen for their incredible heat. But this super-hot West Indian hot sauce is also about great flavor, and there are no extracts or artificial heat enhancers in Matouk's Flambeau. That means you'll enjoy a clean, natural flavor without any metallic or "off" notes that extracts can bring, but with just as powerful a peppery punch. 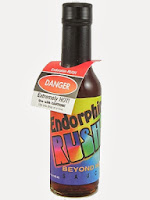 6. **TIE** Melinda's Black Pepper Ketchup and Endorphin Rush Hot Sauce both finished in a dead heat for sixth place, but these two products couldn't be more different. Melinda's Ketchup is a grown-up, sophisticated but nevertheless food-friendly version of your overly-sweet childhood favorite. Made from all-natural ingredients and no high fructose corn syrup, this elegant ketchup gets its pleasantly piquant zip from cracked black peppercorns. I bet you never imagined you could experience fine-dining finesse from a ketchup even when you're chowing down on hamburgers and fries. In contrast, Endorphin Rush is a brazen and brash blast of unadulterated and unforgiving FIRE that will burn you out if you're not extremely careful. More than a micro-droplet will overwhelm served food, so we recommend using this legendary extract-spiked ultra-hot sauce only when cooking, and even then in very small quantities at a time until you get a feel for the heat level. And in case you're wondering, Endorphin Rush is indeed hot enough to produce a heart-racing, face-flushing, sweat-producing and mind-blowing rush of endorphins that serious chiliheads find to be quite exhilarating and even addictive. You've been warned....

7. Marie Sharp's BEWARE Hot Sauce (10oz) is making its first appearance on our top-ten list of best-selling hot sauces. Probably the hottest of Marie's habanero hot sauces from Belize, the lead ingredient in this fiendish creation is capsicum oil, the very substance responsible for the searing heat of habanero peppers. As with any extreme hot sauce, use discretion and the utmost care when handling this one. In addition to the 10-oz bottle, the Carolina Sauces website also offers Marie Sharp's Beware in traditional 5-oz bottles and an adorable but powerful, and conveniently giftable, plastic mini-bottle.

8. Jim's Own BBQ Sauce & Rubs: Best known for its award-winning western NC style (vinegar with tomatoes) barbecue sauces, Jim's Own also makes a mustard barbecue sauce inspired by the flavors of South Carolina, as well as an all-American smoky-sweet BBQ sauce that's perfect for slathering on ribs and chicken. Jim's Own also several different varieties of BBQ dry rubs and seasoning blends, including the delightfully exotic yet approachable Safari Rub inspired by the spices and herbs used in South African barbecue.

9. Smokehouse Wood Chips & Chunks: Did you know that you can buy wood chips, chunks, planks and pellets for BBQ smokers and grills on our website? Last month the Smokehouse brand proved popular. Among the varieties of wood chips and chunks they offer are traditional hickory, bright cherry, mellow apple, robust mesquite and even mild alder, a favorite in the Pacific Northwest for salmon and other fish.

10. Ahrun's Zombie Boogie Pineapple Habanero BBQ Sauce: Festive tropical flavors and scary habanero heat pair perfectly together in this zombie-themed hot barbecue sauce available through our partner Insane Chicken. Wonderful on pork chops, ribs, grilled chicken, shrimp & veggie kabobs, and with other grilled fare, it's fabulously delicious even if you're not into zombies (although it makes a fun and flavorful gift for zombie fans who appreciate good barbecue sauce with a spicy kick).