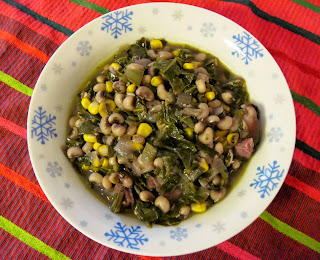 For the record, I was not hung over on New Year's Day. In fact, on January 1st I thoroughly enjoyed a brisk early-morning run not too long after sunrise.

The reason for the name of this recipe is that it's the type of uncomplicated one-pot meal that a very tired (or hung over) cook could throw together with little effort instead of struggling in the kitchen trying to prepare the traditional "lucky" New Year's Day recipes served in the South. My New Year's Day Lucky Stew features all the ingredients believed by some southerners to bring prosperity and luck in the new year, namely, collard greens, corn (used in cornbread), black-eyed peas (used in Hoppin' John) and pork. No matter how much you partied on New Year's Eve or how late you stayed up, I bet you'll be able to make this hearty and flavorful stew for your family on the first day of the year, or any other day when you're pressed for time or not interested in cooking several different dishes.

I actually made this stew for lunch because Greg already had a Boston butt on the smoker and I had made slaw to serve with his barbecue at dinner. Since Greg is cutting back on carbs, cornbread was not on the menu. And because he claims to dislike collards greens, I promised not to make any for dinner -- yet when he tasted my stew, he declared that the collards in it were delicious. Go figure.

One final note: The ingredient quantities are flexible, so feel free to adjust as needed for your tastes or the number of servings you need (the following recipe makes 6 to 8 servings). Any leftovers will taste even better when reheated the following day. 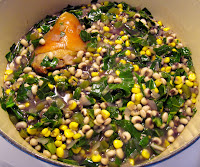 *Although I didn't do this, you can certainly fry up several slices of bacon or fatback to crumble into the stew, and use the rendered fat for sauteing the vegetables.

**The stew shown in the photo was made with red wine, which provided depth of flavor but gave the stew a grayish tinge. Using white wine or leftover champagne results in brighter, lighter flavor and color. If you don't want to use alcohol, you can substitute water or broth. 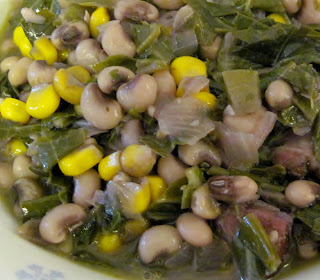 Heat the bacon drippings or oil in a Dutch oven or other similar heavy-bottomed pot over medium heat. Add onion, bell pepper & garlic and cook, stirring occasionally, until softened and onion is translucent. While this cooks, coarsely chop the collards, then add them to the pot. Saute the collards until wilted, then stir in all remaining ingredients except the parsley, salt & pepper.

Bring to a simmer, stir in the parsley (and crumbled fried bacon or fatback if using). Cook until the peas and corn are tender and much of the liquid has cooked down, stirring occasionally and keeping at a simmer without boiling (this can take 20 to 30 minutes, possibly longer, if you started with frozen peas & corn). Taste for balance and season with salt and pepper as desired, and additional hot sauce if you wish. Before serving, pull or cut off any meaty bits from the ham hock or bone, stir the meat back into the pot and discard the bone & cartilage.

Zestfully (and soberly) yours,
Gloria