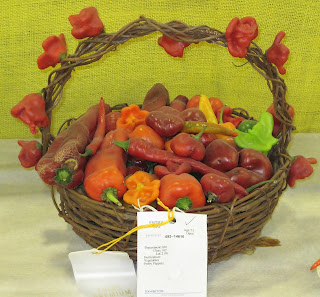 Here are some fascinating (or at least interesting) facts about chile peppers:

*Peppercorns such as black pepper (piper nigrum) or pink peppercorns are not at all related to chile peppers (capsicum). Columbus is credited--or blamed--for the confusion: Apparently when he reached the New World and "discovered" the capsicum, which the natives had been enjoying long before Columbus arrived, he mistakenly thought he had discovered the plant that produced black pepper, and hence christened the plant "pepper".

*The Datil Pepper, native to St. Augustine, FL (the oldest city in the US), is generally considered the rarest North American chile pepper. It is featured in the Florida-made Dat'l Do It Sauces.

*Chile (also spelled chili and chilli) peppers are found throughout the world, and the different varieties cross-breed freely, which makes it nearly impossible to generate a comprehensive list of all the different chile peppers in the world. Perhaps more importantly, it means you should plant your hot peppers far from your mild bell peppers when planting a garden, or by the end of the summer you'll end up with very spicy "mild" peppers (this happened to us once when we planted habaneros next to bell peppers).

*The Peri Peri, or Piri Piri or birds-eye pepper, is native to South Africa and is considered the hottest of the African chiles. It is featured in the US-made African Rhino Peri Peri Hot Sauces.

*Most commercial chile powders are actually blends of black pepper, salt, sugar, cumin, garlic, paprika and just a bit of true dried chile pepper. To get true pure chile powder made from a single variety of chile pepper, your best bet is a Latin American grocery store or a specialty foods/gourmet store - and read the label carefully!

*Capsaicin is the chemical in chile peppers that's responsible for their heat. Especially when consumed in quantity, capsaicin triggers the brain to release endorphins, which create a feeling of well-being, stimulation ("buzz"), relief from pain and sometimes even rapid heart rate. Hence the name "Endorphin Rush" for a popular capsaicin-enhanced ultra-hot sauce. Nowadays you can even purchase pepper extracts that are mostly or even 100% pure capsaicin extract, which is 16 million SHUs (scoville heat units) hot. These should only be used in cooking (never directly on ready-to-eat food) and added carefully one drop at a time.

*Fresh chiles are high in Vitamins A and C, and also provide potassium, vitamin E and folic acid. They taste good AND are good for you!

*Dried chiles often have a completely different name than their fresh counterparts. For example, chipotles are dried and smoked jalapenos, and ancho and mulato are types of dried poblano peppers. The flavors of dried chiles are far more intense and complex: just compare the fresh vegetal flavor of a green jalapeno sauce such as El Yucateco Jalapeno Hot Sauce with the smoky, earthy, rounder and hotter flavor of El Yucateco Chipotle Hot Sauce.