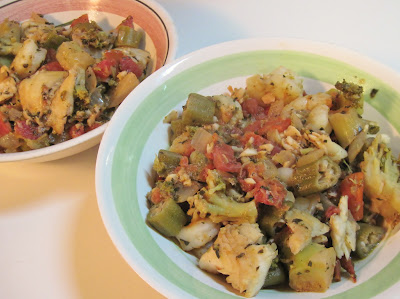 Do you ever have one of those days where you really don't want to cook, but going out or ordering takeout isn't an option?

I had one of those nights recently, and was in no mood to follow a recipe or make one of my memorized stand-by dishes. But I also had no choice but to throw something together, as we didn't have leftovers and we don't eat packaged "microwave" meals.

So, I reluctantly opened the freezer to see what we had that would cook quickly and then looked in the refrigerator and pantry for vegetables and seasonings that would require minimal preparation and would go with the seafood I had pulled from the freezer.

After about 30 minutes including the cooking time and minimal prep effort, dinner was ready.... and it was surprisingly GOOD.  Whenever Greg tells me, without any questioning and more than once, that something is really GOOD, I know that dinner is a success. 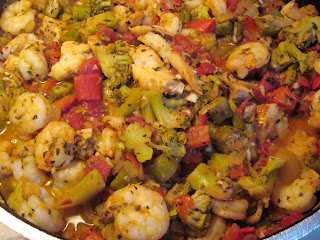 I share this story with you not because I came up with a culinary masterpiece (I did not), but rather to show that even when you're not in the mood for cooking, you can still throw something together that is healthy, wholesome and tasty. I don't even consider the following to be a recipe, but rather an "accounting" of what I had and what I did. It's the antithesis of a recipe and more accurately considered "throw cooking," i.e., you gather what you have, use your sense of what flavors you like and then throw everything together applying instinct and experience instead of formal measurement. It's a refreshingly liberating experience and a great way to spark your creativity. Just trust yourself, have fun, and much more often than not you'll end up with something that you'll enjoy eating.

Here is what I'm calling The Reluctant Cook's Creole Seafood Stew. If you decide to make it, go ahead and change it up as much as you wish, based on what you have on hand and what you like to eat. After all, that's the whole point of this post!

Ingredients
Frozen shrimp, raw & peeled: I had approx. 1 lb
Frozen fish: I had 2 small tilapia fillets totalling 6oz
1 bay leaf (because it goes well with seafood & the other ingredients)
1 medium onion, diced
Minced garlic: I used a handful of cloves because we love garlic
1 1/2 Tbs bacon grease to saute the vegetables (because everything tastes better with bacon; you can use olive or other oil if you prefer)
1 14.5 oz can diced tomatoes, undrained
2 roasted red peppers (because that's what was left in the jar), diced
A couple of splashes of red wine (because we planned on drinking the rest - omit if you prefer)
About 1 cup frozen sliced okra (that's all that was left in a previously opened bag)
Half of a family-size bag of frozen chopped broccoli
Creole seasoning such as Emeril's Original Essence or Slap Ya Mama: Add to taste
Dried Basil & Dried Marjoram:  Ditto, and/or other herbs
Salt & pepper to taste 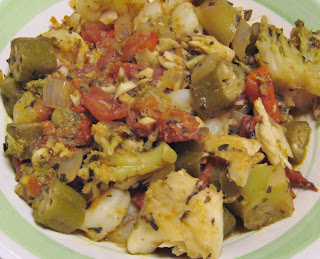 I began by placing the frozen seafood in a bowl with cold water to defrost while the bacon grease melted over medium-high heat in a deep frying pan (a large saucepan would work, too). I added the bay leaf to the pan and quickly chopped the onion & minced the garlic, then added those to the pan to fry, stirring occasionally. I drained and diced the roasted red peppers, opened the can of tomatoes, and when the onions & garlic had softened and turned translucent I stirred in the roasted peppers, tomatoes with liquid, frozen okra & broccoli, and red wine. After stirring to combine, I covered and let simmer until the frozen vegetables were thawed and tender (about 10 minutes or so, but I wasn't timing).  Note: If you want to serve this stew over rice, pasta, quinoa, etc., this would be the time to start that cooking.

Once the broccoli & okra looked mostly cooked, I drained the defrosted seafood and added the fish & shrimp to the pan. I then sprinkled the creole seasoning and dried herbs over everything, stirred and covered to let the fish & shrimp cook, stirring occasionally.  It probably took no more than 10 minutes for the shrimp to turn pink and the fish to get flaky (in other words, both were cooked within 10 minutes of adding). At that point I tasted for balance so that I could add more of any of the herbs, creole seasoning, salt or pepper as desired.  And then dinner for 2 was ready.

PS:  Have you ever thrown something together that turned out to be surprisingly good? Please share your story with us by leaving a comment.