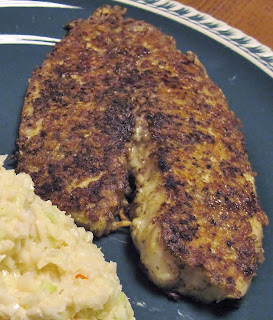 Here is a healthier, low-carb alternative to breaded and fried fish. My recipe uses parmesan cheese instead of bread crumbs or other such breading.

The trick is to get your skillet REALLY hot, which is why I like using cast iron. The high heat will cause the cheese to form a nice browned crust instead of a gooey mess. You only need a very small smear of butter, oil or other fat, and it's best to apply it with a wadded paper towel once the skillet is hot by carefully and quickly wiping onto the skillet (it will sizzle and possibly smoke). Make sure you fish is ready to go in the skillet immediately afterwards so that you don't burn the oil or fat.

I used tilapia when I made the parmesan-crusted fish shown in the photo, but catfish, flounder, sole, whiting and other similar fish will all work. If you can bread and fry it, you can use parmigiano cheese instead of bread crumbs.

If you are cooking more than two fish filets, simply increase the amount of parmesan and seasoning, keeping the ratio essentially the same (one egg will be sufficient for several filets).

Heat a large cast-iron or other similar skillet until very hot (be careful if using a nonstick skillet because some types should NOT be heated while empty or ungreased). While the skillet is heating, stir together the cheese and seasoning in a shallow bowl or on a plate. Dip each fish filet in beaten egg, allow excess egg to drip off, then place the filet in the cheese mixture and coat well on both sides with the mixture -- you may want to use your fingers to pat it on well, covering both sides of each filet. Place the coated filets on a plate until all are ready to fry.

When the skillet is very hot, use a wadded paper towel to smear a very small amount of fat to coat the cooking surface, working quickly and being careful not to burn your fingers. Immediately place the cheese-coated filets in the skillet, being sure to leave enough room between them for flipping (if you are cooking several filets, you may need to work in batches). If you have additional cheese mixture left over, you can pat more of it on to the exposed side of the filets as they cook. Cook the fish until the cheese on the bottom side is nicely browned and forms a crust, about 3 to 4 minutes, then carefully flip the fish to cook the other side -- you'll know the fish is ready to flip when it slides easily on the skillet if you push it with your spatula. Cook on the other side until nicely browned and crusted, about 3 minutes (it's been my experience that the second side cooks faster). Serve hot.

PS: If you like to use cocktail sauce on fried fish, try Historic Lynchburg Jalapeno Seafood Cocktail Sauce for a zippy, zesty flavor.