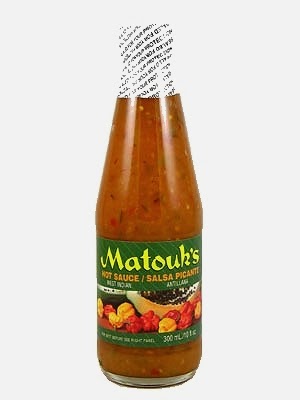 Our best-selling hot sauce of all time was also the top-selling hot sauce for 2013. Hot sauces from the Caribbean were the most popular last year, but you'll find two long-time favorites made in the USA on our top 10 list, which is below:

1. Matouk's West Indian Hot Sauce is a favorite of folks who appreciate well-balanced Caribbean flavors of fiery peppers, tangy mustard and luscious tropical fruit. This thick hot sauce is superb when you want to add medium heat and island flair to anything from fish and seafood to poultry, or to rice dishes and cooked vegetables. Try it with grilled burgers or sausages for a delightful departure from the ordinary!

2. Jamaica Hell Fire 2 in 1 Hot Sauce features fiery sun-ripened chilies and specially selected Jamaican spices for a savory, tangy hot sauce you can enjoy any time of day on everything except dessert. Twice as hot as the boring, watered-down supermarket hot sauces (hence the name), it's strong enough for a solid peppery kick but it won't knock your taste buds out.

3. Matouk's Calypso Hot Sauce is hotter and has less fruit notes than Matouk's West Indian, but is just as thick and rich with a pleasantly more pronounced Caribbean mustard tang. Able to stand up to hearty, full-flavored red meats but sufficiently food-friendly to complement grilled shrimp or broiled fish, it's an excellent choice for nearly any occasion -- and especially if serving Caribbean favorites like red beans and rice, meat patties and savory island stews. 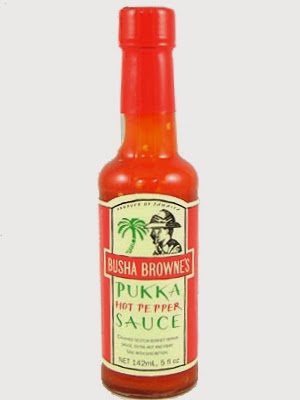 4. Busha Browne's Pukka Sauce has its roots firmly planted in Jamaica's colonial past, and that's a good thing if you want a spicy-hot pepper sauce for adding tangy heat to any dish without having it taste like Jamaican jerk (don't get me wrong, I love jerk but not with every meal). This is one of those bright and zesty pepper sauces you look forward to splashing on your scrambled eggs & hash browns in the morning, or on pizza, fries or burgers at lunch, and on spaghetti, stews, nachos, Chinese take-out and other savory evening fare.

5. Walkerswood Scotch Bonnet Hot Sauce: Don't be fooled by its short list of ingredients. The true beauty of this Jamaican hot sauce lies in its simplicity, at least for fans of true scotch bonnet pepper flavor and heat. If you make your own jerk marinade or other Caribbean sauces and condiments at home, or just appreciate a "best of class" single-pepper hot sauce starring Jamaica's most famous chile, this one is for you.

6. Matouk's Flambeau Sauce is pretty much as hot as a hot sauce can get when left to its own devices and not spiked with extracts or other "hot sauce steroids" (as I like to call capsaicin extract). Even seasoned chiliheads with jaded palates agree that Flambeau easily rates a 10 on a 1 to 10 heat scale -- but they also agree that it stands out from the crowd for its richly thick body and multi-faceted flavor from the pepper mash made from select aged peppers. If you're partial towards super-hot heat levels but not at the expense of honest chili pepper flavor, this is the extreme hot sauce for you. 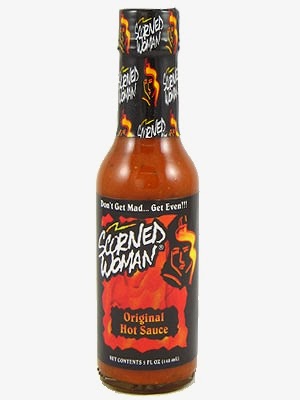 7. Scorned Woman Hot Sauce: You can always find a bottle of this classic vinegar pepper sauce in my refrigerator. In fact, it might be the very first "real" hot sauce I tried after growing bored with Texas Pete and Tabasco many years ago. Scorned Woman is one of those rare hot sauces that uses several different chilies plus ground black pepper, and does not "emasculate" them with too much vinegar. This is my go-to hot sauce when making hot & spicy soups and other slow-cooking savory recipes that don't have an ethnic twist.

8. Matouk's Soca Hot Sauce: This lesser-known member of the Matouk's Hot Sauce family is fairly new to the US market, and I'm proud to say that Carolina Sauce Company was one of the first online sources for it. Not quite as hot as Matouk's Flambeau but otherwise very similar in overall flavor, texture, color and aroma, it's an excellent choice when you want big-time peppery heat (let's say an 8 if Flambeau is a 10). 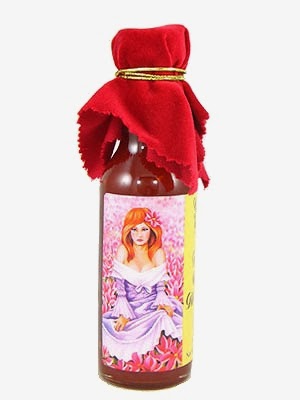 9. Matouk's Hot Pepper Salsa Picante Sauce is another notch lower on the Matouk's heat scale, probably comparable to Matouk's Calypso but with a more tangy-savory, West Indian mustard flavor. The other main difference is that there are no papayas or other "sweet" ingredients in the Salsa Picante. In sum, if you're seeking a savory, full-bodied Trinidad hot sauce with West Indian tang and heat, this is the one for you.

10. Georgia Peach & Vidalia Onion Hot Sauce: One of the milder hot sauces on the market, this playfully devilish, sassy-sweet southern style sauce is friendly and approachable, and some would say downright irresistible. It's fantastic with all sorts of pork and chicken dishes, as well as with fried or grilled seafood and vegetables.