The Cat Who Loves Hot Sauce

Email ThisBlogThis!Share to TwitterShare to FacebookShare to Pinterest
Bruiser joined our household in 2003, the same year that Carolina Sauce was launched. The shelter had named him "Bruce," but one look at this big kitty with the "cauliflower" ear and I knew that he'd be coming home with me and that his new name would be Bruiser. His name notwithstanding, Bruiser is a lover, not a fighter -- and he loves food. Like any true Carolina boy, he loves pork: Ham, bacon, and even pulled pork BBQ (we nicknamed him "Pork Butt" when he was plump, but now that he's a trimmer 12 lbs we just call him "Bru"). Which makes me wonder: Why don't they sell pork flavored cat food?? 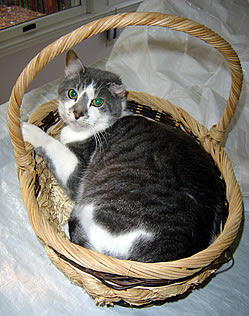 Soon after adopting Bruiser, we learned that we could no longer leave any food on the counter, stove or table, or dirty dishes in the sink. Bruiser loves everything: Bread (he'd tear holes in the plastic bag to nibble on the bread), crackers or chips (ditto), rice (he'd knock the lid off the pot and dig in), and anything left on an unattended plate. So kitty has a carb addiction, and we now have a "bear-proof" kitchen. But that's not all: Bruiser loves tomatoes. He'll whine and beg for a little piece any time Greg or I start cutting a tomato. I discovered his affinity for tomatoes when I found little "vampire" punctures on several tomatoes I had left by the kitchen window to ripen, and Bruiser gleefully gnawing on another tomato he had knocked to the floor. Bruiser soon learned the word tomato, so we had to start saying "mater" to keep him from running up and whining if we mentioned tomatoes within earshot. That worked until he figured out what a "mater" is. Now we have to spell "tomato". Yes, the cat is that smart. If he figures that one out we're really in trouble.

I thought tomatoes were a pretty strange thing for a cat to crave, but what really shocked me was the day that Bruiser discovered hot sauce. And I'm not talking about the tame stuff like Texas Pete. This cat craves capsaicin. I'm talking ultra-hots, crazy chilehead stuff. Before I go any further, however, let me set the record straight: NO we don't offer our cats human food to see if they'll like it. These have all been inadvertent discoveries, the result of feline curiosity and brief lapses of human attention. Well, except maybe for the hot sauce....

Greg had made Buffalo wings one evening, and as usual Bruiser was prowling, nose twitching and pupils dilated, waiting for a chance to "fast-paw" a wing off his plate and escape to a hiding place under a piece of furniture to enjoy his "catch" (yes, he had done this once before). But this time, Greg had made "suicide wings" slathered with DEFCON 1 Extreme Heat Wing Sauce, and he was keeping a watchful eye on The Bru to prevent a repeat performance of the "fast-paw" wing pilferer. Greg figured that if Bruiser somehow managed to get a taste of the wings, the ultra-hot wing sauce would teach him an unforgettable lesson and cure him of his annoying habit.

Greg polished off his suicide wings without incident. But as Greg reached for a napkin, the "fast-paw" struck -- and a gray & white streak took off carrying a DEFCON-slathered chicken bone in his mouth, tearing through the kitchen and into the game room, with me chasing behind and Greg laughing in anticipation of Bruiser "learning his lesson" from the ultra-hot wing sauce. I finally caught the cat under the pool table and with Greg's help we wrestled the chicken bone from Bruiser's jaws. Not to be thwarted, Bruiser took off and returned to Greg's plate, which Greg had cleared of bones but left coated with DEFCON 1 hot sauce. To our horror, we found Bruiser happily licking off the ultra-hot sauce from the plate. Bruiser then came up to us and begged for more. No, we did not oblige. And yes, we were relieved that the capsaicin-spiked wing sauce didn't hurt him. But now we have to secure our hot sauce, too. I bet that cat dreams of BBQ nachos with jalapenos and salsa...

Our other cat is Teufel, and thankfully he is most definitely cat-like in his food choices. Even bigger in height, length and girth than Bruiser, Teufel is an accomplished hunter who eats what he kills instead of leaving his prey at our doorstep (I guess he sees us as well-fed and self-sufficient). Teufel eagerly devours his cat food breakfast each morning before going out, and has rarely expressed any interest in human food. The look of disdain he gives Bruiser when The Bru begs for tomatoes is simply priceless. Teufel is all cat, all the time. I just hope Bruiser doesn't introduce him to hot sauce.