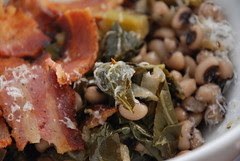 Hoppin' John is a black-eyed peas dish that's usually enjoyed on New Year's Day in the South.  If your New Year's resolution involves losing weight or cutting back on fat, you'll probably want to leave out the bacon in this recipe and substitute olive oil instead.  Likewise, for a vegetarian dish I like to saute some tempeh in olive oil until crispy and then crumble into the hoppin' John. Another meat substitution you can make for the bacon is cubed country ham. I used dried herbs I happened to have on hand, but you might want to experiment with different herbs or perhaps with fresh.  For a traditional Southern style New Year's Day celebration, serve with collard greens and a slab of corn bread.

If using fresh black-eyed peas (usually available in a plastic container in the produce aisle), rinse & cook according to package directions - the container I used came with 11 oz of fresh peas, which measured out to about 2 cups before cooking. The instructions on the container said to bring 2 1/2 cups of unsalted water to a boil in a 3-quart saucepan, then add the peas and return to a boil. Reduce heat and cook, uncovered, at a gentle rolling boil for 8 to 10 minutes or until tender (I went
with 8 minutes). Drain and set aside, discard the water.

In a 2 1/2 qt saucepan, saute the bacon until crispy, drain & cool on paper towels. Add bay leaf and chopped onion to the bacon fat and saute until the onion is soft and translucent. Add garlic and saute for a few minutes to cook the garlic - make sure it doesn't brown. Stir in the herbs, pepper, black-eyed peas and broth. Bring to a gentle boil and cook uncovered, stirring occasionally, until most of the liquid is absorbed, about 20 minutes. While this is cooking, crumble the bacon and set aside.

Once most of the broth has been absorbed, stir in the crumbled bacon and simmer for a few minutes more. Taste for seasoning and adjust as desired (I added a little more pepper but didn't add salt - you may prefer to add salt, especially if making with olive oil instead of bacon). Serve over cooked rice, preferably with a side of collards or other dark leafy greens.  Happy New Year!