A few years ago, Greg discovered that he had a knack for making pie.  From old-fashioned apple pie to traditional pumpkin pie to elegant bourbon-chocolate pecan pie, Greg can make them all from scratch, including the pie crust.  To save time, however, he'll often buy good fresh or frozen pie crusts, and instead of going through the trouble of cleaning and cooking a pumpkin he'll use canned organic pumpkin pie puree.

This year was different.  While reading one of my favorite food blogs I discovered an intriguing recipe for Maple Smoked Pumpkin Pie.  The name alone gave rise to several questions:  Was the entire pie smoked?  Was maple wood used for smoking?  Is it possible to smoke a pumpkin?  Could this possibly taste good?

Most of my questions were answered as I read the recipe:  This essentially is a regular pumpkin pie you cook in an oven (not on a smoker), but it's sweetened with maple syrup and made with smoked pumpkin puree.  And according to the blogger, the flavor is rich, sweet, smoky and deeply satisfying.  Naturally, I asked Greg to make this unique pie for Thanksgiving.

The first thing we needed was a pumpkin.  The recipe calls for 2 cups of smoked pumpkin puree, and after some research I decided that the small, 2 lb 6 oz pie pumpkin I had bought would be sufficient (I was wrong).

To smoke the pumpkin, Greg quartered it and scooped out the seeds--which I saved for roasting separately--and then put them on his (already prepped) smoker for about 2 hours until the pulp was soft.  Greg said it was much easier to cook the pumpkin on the smoker than in the oven or using other more conventional cooking methods.  But then again, he's quite adept at using his smoker.

The smoked pumpkin flesh wasn't nearly as dark-brown as we had expected from the recipe, and when scooped out into a bowl the pulp was dry enough to not require any straining to remove excess liquid before pureeing.  Alas, it also didn't amount to the 2 cups of smoked pumpkin puree required by the recipe.  So we improvised:  Greg quickly peeled and cooked a large sweet potato which, when pureed, resulted in 1 cup of sweet potato puree. 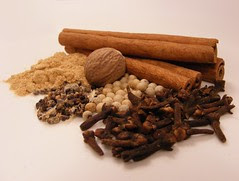 Our verdict upon tasting the pie:  Outstandingly delicious!  It was more complex and darkly richer than traditional pumpkin or sweet potato pie, with the woodsy sweetness that only real maple syrup can impart.  The pumpkin-sweet potato blend resulted in a harmony of harvest flavors with only a slight hint of smoke, probably because of the addition of the un-smoked sweet potato.  Which, of course, raises a whole new question:  Is it possible to smoke a sweet potato?

We'll definitely be making this pie again, and more than once:  We'll try it with a larger pumpkin so as to get the full 2 cups of smoked pumpkin puree, AND we'll also experiment with sweet potatoes on the smoker.  I'm also curious to try smoked pumpkin in other recipes, e.g., soups, casseroles, etc.

If you make this recipe, or any other recipe using smoked pumpkin (or smoked sweet potatoes), please post a comment to let us know how you made it and whether you liked it!

PS:  If you love the flavor of smoked foods but don't have a smoker--or if you need a Christmas gift for someone with a grill who likes smoked foods--these natural wood smoking pellets are an easy and convenient way to add REAL smoked flavor to anything cooked on the grill.