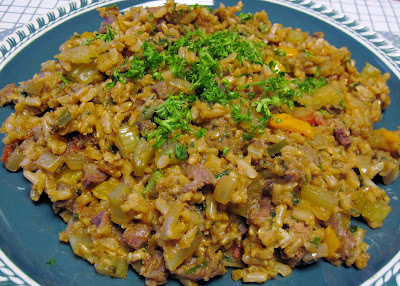 Dirty rice is a traditional Cajun dish of white rice cooked with chopped or ground chicken livers and/or gizzards (which give the rice a dark, i.e., "dirty" color) and typical Cajun seasonings.

I created the following Mexican twist on this Cajun classic when I realized that I didn't have all the ingredients I needed to make authentic dirty rice, but had already thawed my stash of frozen chicken and turkey livers, gizzards & other giblets* and had the right ingredients for making something Mexican.

The other change I made was to substitute brown rice for the white, simply because that's what was in my pantry. If you are using white rice, adjust the liquid-to-rice ratio to 1 1/2 cups liquid to 1 cup rice.

*We usually have plenty of frozen poultry livers & gizzards because we've been buying whole organic chicken and turkey rather than already-cut parts. Buying the whole bird is significantly cheaper, and the "odd bits" like necks & backs can be used for making stock or broth while the "giblet bits" are highly nutritious and can be used in many recipes (not just fried or added to gravy).

So, if you like dirty rice and want to try my spicy, "South of the Border" version, here's how to make it:

Carefully drain off the liquid from the diced tomatoes into a measuring cup, then fill to the 1-cup mark with beer and pour this into a saucepan.  Add rest of beer to measuring up - if less than 1 cup, then fill to the 1-cup mark with water. If you reach the 1-cup mark and still have some beer left in the bottle, feel free to drink that. Pour the cup of beer (or beer & water) into the saucepan, add rice and bring to a boil over high heat. Stir, reduce heat to low, cover and cook for 50 minutes on low, then turn off the burner and let sit, still covered, for another 10 minutes. 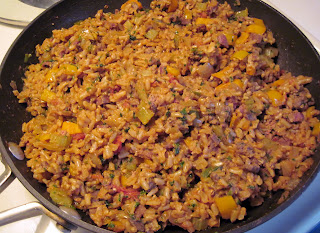 While the rice is cooking, heat the oil/fat in a large, deep skillet over medium-high heat.  Add the poultry livers/giblets and saute for 2 to 3 minutes until browned, stirring regularly. Add the vegetables except the tomatoes and saute until softened, about 10 minutes. Add the tomatoes and Mexican seasoning, stir and bring to a gentle simmer. Reduce heat to medium-low, cover and simmer for about 15 minutes. Uncover and check liquid amount: The mixture should be fairly thick and saucy without excess liquid. If it seems too "watery," simply raise the heat to cook off some of the liquid. On the other hand, if it looks fairly thick and the rice isn't yet done, cover the mixture and reduce heat to low to keep warm until rice is done.

Once the rice is done cooking, stir it into the cooked vegetable mixture, stir in the cilantro or parsley, and taste for balance. If desired, add salt and/or a few splashes of hot sauce to taste.  Serve hot, garnished with a little chopped cilantro or parsley.