Email ThisBlogThis!Share to TwitterShare to FacebookShare to Pinterest
Newsflash: For the past few years, chile pepper crops in Jamaica, the West Indies and elsewhere in the Caribbean have been hit by a mysterious blight, resulting in product shortages and production problems for some of the most popular brands of hot sauce and Jamaican jerk condiments. Initially blamed on the harshness of tropical storms, the nature of the damage to the peppers was such that it couldn't be blamed solely on the weather (e.g., tiny teeth imprints unlike those of any known animals). This mysterious pepper blight is now striking hot pepper crops outside the Caribbean, including residential vegetable gardens in the US, to the dismay of fiery food lovers and hot sauce fans. Until now, the cause of this devastating pepper blight had remained a mystery. But thanks to our tireless sleuthing and the use of the latest in spy camera technology, the Carolina Sauce Company's research department has solved the mystery of the chile pepper blight. Meet the elusive and nefarious Pepper Gnome: 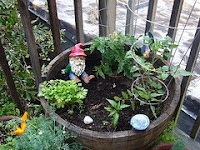 Disguising itself as an innocent, ordinary garden gnome, the devious Pepper Gnome has perfected its ability to remain motionless for hours, even days, thereby camouflaging its true identity and devouring hot peppers only when no one is around. The Pepper Gnome was originally thought to have become extinct during the late 18th century along with the last known brownies, fairies, leprechauns and other magical little peoples. However, it is now believed that the hardiest Pepper Gnomes survived by living only amongst the hottest varieties of chile peppers, generally considered inedible until recent times when the fiery foods craze and quest for the hottest hot sauce was born (we can thank Dave's Insanity Sauce for that). 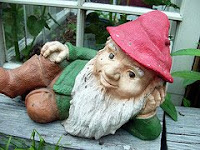 With flesh as tough as modern plastic, the modern Pepper Gnome has proven resistant to all forms of pesticides and herbicides, wreaking havoc in fields of vulnerable habanero and scotch bonnet peppers throughout the Caribbean. Left unchecked, a Pepper Gnome infestation can devastate a commercial or residential pepper crop in no time, dooming the hapless farmer or gardener to a season (or longer) of boring, bland food. But there is hope:

Here at Carolina Sauce Company we have discovered that spraying a Pepper Gnome with capsaicin extract rated at 800,000 Scoville Units or higher will permanently paralyze the Pepper Gnome, turning it into a harmless -- and inanimate -- garden ornament. To that end, we recommend that anyone planning on growing chili peppers in their garden "arm" themselves with one or more bottles of Satan's Blood Hot Sauce (rated at 800,000 Scovilles) or Da Bomb The Final Answer (rated at 1.5 million Scovilles, and able to wipe out the worst Pepper Gnome infestations).

We thought we had captured a Pepper Gnome in action, gobbling up a hothouse habanero, but unfortunately we were spotted as we clicked on the shutter and the Pepper Gnome instantaneously gulped down the remains of the pepper and froze in an innocent pose. However, if you are wily enough to photograph a Pepper Gnome in your garden, either with or near a hot pepper, please share your photo with us -- you can email photos to sales"AT"carolinasauce"DOT"com. We'll post the best Pepper Gnome photos here, AND you just might win a free bottle of a new ultra-hot hot sauce that will soon be available (and that part's not a joke!)