Email ThisBlogThis!Share to TwitterShare to FacebookShare to Pinterest
Hot sauce was all the rage among Carolina Sauce Company customers last month, as almost all of our best-selling products for August were hot sauces. The biggest surprise for me, however, was the new number one best-selling sauce, which hadn't made an appearance on the Top Ten list for some time but is one of the better sauces on the market, as well as one of the "oldest." Here's the complete list of August's ten best-selling sauces and seasonings: 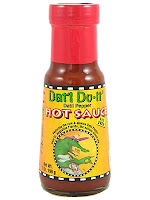 1. Dat'l Do It Hot Sauce is made in Florida from the native datil pepper. Flavorful and fiery, Dat'l Do It is a versatile, all-purpose hot sauce that will complement any savory dish--and it's not vinegary or runny, making it great for burgers and sandwiches, too.

4. Walkerswood Jonkanoo Pepper Sauce is named after a colorful Jamaican street festival, and this sunny hot sauce embodies that playful spirit with its tasty savory-sweet flavor and feisty heat. 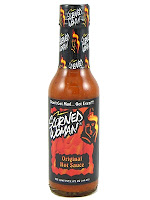 5. Scorned Woman Hot Sauce has been around for years, and its staying power is a testament to how well this classic hot sauce goes with pretty much any food. Scorned Woman stands out from other vinegar-pepper hot sauces because of its smart blend of peppers with just enough vinegar for an assertive tang without crossing over into mouth-puckering harshness.

6. If you like your hot sauce HOT but don't care for extracts, Matouk's West Indian Flambeau Sauce is for you. Matouk's Flambeau delivers an unbelievable amount of scotch bonnet heat but does so naturally, in a thick Caribbean sauce that actually tastes good. Serious chileheads enjoy this hot sauce on everything from scrambled eggs and other breakfast fare to burgers and sandwiches, grilled foods and other hearty dishes.

7. Georgia Peach & Vidalia Onion Hot Sauce is one of our all-time best-selling sauces because its luscious, food-friendly flavor and relatively gentle heat level appeals to everyone, even folks with a lower tolerance for spiciness. Made with juicy ripe peaches and sweet onions, this fabulous sauce pairs beautifully with pork, chicken, seafood, grilled veggies, and all your favorite savory dishes. 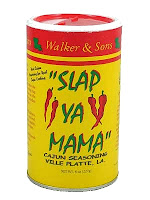 9. The 8 oz. size of the original Slap ya Mama Seasoning came in 9th among all products last month. This authentic Cajun seasoning is made with black pepper and is perfect for all your favorite Cajun and Creole dishes including gumbo, jambalaya, etouffee and more.

10. Completing our list of August's best-selling products is another great sauce from Scorned Woman, their kinder, gentler Scorned Woman Sweet Majic. This hot sauce tempers its peppery heat with a touch of fruit, and the end result is a spicy-sweet sauce that brings out the best in chicken, fish, seafood and veggie dishes while still standing up to pork and other meats.