The sun was shining, the North Carolina hot sauces and BBQ sauces (and local beers & wines) were flowing, the bands were playing, people were dancing in the streets, and there was food aplenty... In short, it was a fun and festive time at the 2011 NC Hot Sauce Contest this past Saturday in Oxford, NC. Even bigger and better than last year's festival, this year's event featured so many sauce companies and other vendors that we didn't get to see them all despite spending most of the day there. We did get to re-connect with old friends, including Scott Granai of Outta the Park BBQ Sauce, Page Skelton of Cackalacky Spice Sauce, Willa and Marilene who now own Jim's Own BBQ Sauce, and Pluto himself of Pluto's Jamaican Jerk Sauces, to name just a few. And of course we made some new friends, too--it was refreshing to see "new blood" joining the ranks of NC sauce producers. 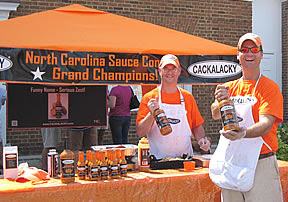 The hot sauces we sampled ran the gamut from feisty and flavorful to burn-your-tongue-off hot. An eye-opening number of them were made with the incendiary Jolokia pepper, and you could even purchase bags of the fresh jolokias from Bailey Farms. Apparently the ghost-pepper craze has reached North Carolina. Most of the barbecue sauces were either tart & tangy Eastern NC style vinegar sauces or tomato-vinegar Piedmont (aka Lexington style or Western) NC sauces, but you could also find thick, rich slathering sauces of both the savory and sweet varieties, plus a few mustard BBQ sauces, an "east meets west" NC combo sauce, and a handful of sublimely sweet and light grilling sauces that provided pleasant relief to my pepper-weary palate.

The food highlight for Greg and me, however, was the food from the Vance-Granville Community College Culinary Arts booth. Honestly, I had no idea that they had a Culinary Arts program there, but if the two items we sampled is any indication, they're teaching their students well. The pulled pork taco caught my attention first, because I had never considered putting Carolina BBQ in a taco shell. To my surprise, this "NC-Mex fusion" worked remarkably well and was less messy than a conventional ground-meat taco. The pork was tender and juicy, lightly seasoned with a vinegar BBQ sauce and topped with creamy coleslaw, all in a crunchy corn taco shell. The combination of crunchy/tender-meaty/creamy textures was quite satisfying. 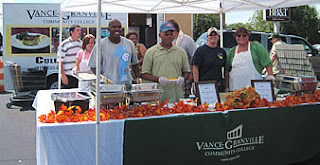 Also on their menu were Buffalo chicken sliders: Lightly battered boneless chicken seasoned with a tangy Buffalo sauce, served on a small burger bun. The flavors were enticingly savory and just mildly spicy, with that authentic Buffalo wing sauce tang that comes from cayenne and vinegar. I'm rather picky about chicken and detest the rubbery texture of buffet or food-service chicken, but that was not a problem here: The chicken in the sliders was melt-in-your-mouth tender. Perhaps it had been marinated in wing sauce and butter prior to breading and cooking? I asked one of the friendly folks staffing their booth what brand of Buffalo sauce they used, and she replied that they make their own, from scratch, using NC grown peppers, too. This was what I call "honest food," made from fresh, quality ingredients, with a splash of sensibility, a dash of creativity, and zero pretension. Bravo, Vance-Granville Community College Culinary Arts program, for representing well at the NC Hot Sauce festival this past weekend!

I took many photos while at the festival, but alas, I must have done something wrong with Greg's digital camera because less than a dozen were saved. Some of them are posted here, and you can see all of them on the Carolina Sauce Company Facebook page. If you were at the festival and took any pictures or want to share your thoughts about any of the sauces, etc. , please leave a comment here or on our Facebook page. And if you have a favorite hot sauce or BBQ sauce festival that you'd like to tell us about, we want to hear about it!