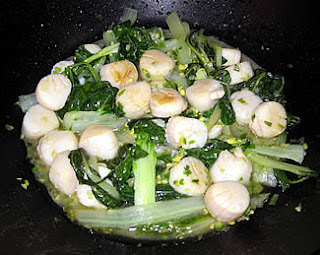 I was inspired to create this recipe after reading a blog post from one of my favorite food bloggers, Jacqueline Church, that vividly described the sensory pleasures of making and eating a classic Chinese sauce, Ginger-Scallion Sauce.

As someone who appreciates the refreshing zing of fresh ginger, the earthy pungency of scallions, and the sensory pleasures of peeling and chopping aromatic ingredients, I knew from the writer's vivid description that I would enjoy this sauce on several levels.

Although poached chicken was mentioned as a logical pairing for the homemade ginger-scallion sauce, I decided to go on a hunt for the freshest scallops I could find. Luckily our local Whole Foods store had exactly what I wanted at their seafood counter, and I also purchased fresh ginger root, organic scallions, peanut oil and a bunch of organic bok choy (I already had good-quality soy sauce and Kosher salt at home). Armed with these ingredients, I joyfully drove back home ready to try my hand at making this sauce which sounded almost too good to be true.

First, the bad news: The piece of fresh ginger I had purchased was not large enough to yield the 1/3 cup plus 2 Tbs of minced ginger called for in the recipe. Now the good news: I had exactly half as much ginger as needed for the recipe, so I simply halved the other ingredient amounts and the sauce turned out just fine and was enough for the pound of scallops I had purchased. Another plus: The tip about using a teaspoon to scrape the skin off the ginger worked like a charm, and that's now my new method for peeling ginger. 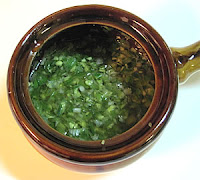 I followed the recipe for ginger-scallion sauce as written in the blog--except I halved all the ingredient amounts--and I'm happy to report that it was quite easy and enjoyable to make. The intensely aromatic fragrance released when the hot peanut oil hit the minced scallions and ginger was quite pleasing, and the accompanying sizzle provided a lovely auditory counterpoint to this sensory symphony, but the best was saved for last....

Because scallops can be notoriously tricky to cook, I made the ginger-scallion sauce first and set it aside while I trimmed chopped some of the washed bok choy into long, slender strips. I heated a little peanut oil in my wok and added the bok choy, and stir-fried until the leaves turned bright green and the stems softened, which took only a few minutes. I scooped the bok choy out of the wok and into a bowl, then added my fresh scallops to the hot wok and seared them until they were almost fully cooked--this took no more than 3 minutes, if that long. You have to be very careful with scallops, cooking them only until they appear to be about 80% done and then removing them from heat because they will finish cooking from residual heat. If you leave them in the wok until they're fully cooked, the residual heat will overcook them and make them tough and rubbery.

Once the scallops were lightly seared on the outside and appeared to be almost done, I scooped them out of the wok and into the bowl with the bok choy. I poured in the ginger-scallion sauce, gently tossed everything together, and served "as is"--feel free to serve over cooked Asian noodles like soba, or over rice. I took a bite, allowed the rich flavors of the sauce to dance in my mouth with the buttery scallops and tender greens, and smiled with pleasure. Blissfully good, and deeply satisfying, just like comfort food should be. Best of all, the sauce and this dish were easy and relatively quick to make. And I'm sure the ginger-scallion sauce would be just as good with chicken, fish, other shellfish and even tofu. If you make this recipe or the sauce, please post a comment to let me know what you think, and how you made it.