Email ThisBlogThis!Share to TwitterShare to FacebookShare to Pinterest
Lumpy's Ice Cream is a North Carolina original, made with wholesome, all-natural ingredients including local hormone-free milk & cream, and featuring popular classics like chocolate and vanilla plus inspired flavor combinations (think Bourbon & Bacon or Banana Walnut) with whimsical names like Bohemian Banana and Wired Hippie.

After years of selling at the NC farmer's market, the state fair, and at numerous festivals & events around NC, Lumpy's recently opened their own ice cream shop in Wake Forest, NC.  Greg and I attended their Grand Opening on Saturday and had a grand time enjoying their fabulous ice cream and chatting with Lumpy and his hard-working gang. Despite the rain, their shop was packed with folks of all ages cheerfully indulging in single and double "lumps" (scoops) of ice cream served in cups, sugar cones, waffle cones, brownie sundaes and milkshakes. 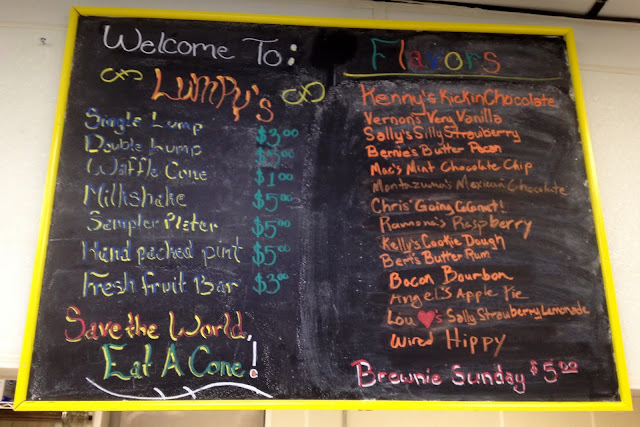 Although my favorite flavor is their Bourbon & Bacon ice cream which I first had at last year's NC State Fair (you can read about it here), I opted for two other flavors in my double-lump waffle cone: Montezuma's Mexican Chocolate and Wired Hippie.

The Mexican Chocolate was a velvety, sweet chocolate generously spiced with cinnamon and just enough pepper (I'm guessing cayenne) for a zippy, piquant finish, reminiscent of creamy-peppery Mexican hot chocolate. The Wired Hippie featured mellow coffee ice cream with nutty, chocolate-y trail mix blended into it, for an experience I'd describe as eating a crunchy frozen cappuccino. Both ice creams had a silky smooth mouthfeel and were less solidly frozen than typical hand-scooped ice cream. The softer consistency allowed the ice cream to yield readily to every lick of my tongue, letting the flavors develop on my palate without freezing my taste buds. And because there are no artificial ingredients, both ice creams were lighter in color than mass-produced commercial brands, sporting appealingly gentle shades of taupe and tan. The waffle cone itself was a pleasant surprise in that it recently come off the waffle iron and was still fragrant and warm to the touch, with just the right toothsome crunchiness, making my waffle cone ice cream experience a delight to all my senses.

Greg opted for a lump each of Butter Pecan and Cookies & Cream, and between bites he declared both flavors outstanding. That was all I could get him to say, as he was singularly focused on his ice cream. In fact, we were both so busy devouring our treats that we forgot to take photos of them. However, Lumpy was kind enough to open his frozen treasure chests so that I could take a couple of quick pics of his collection of ice cream jewels: 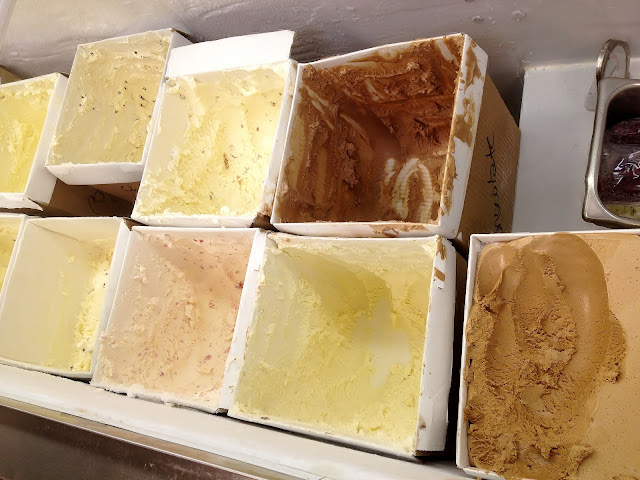 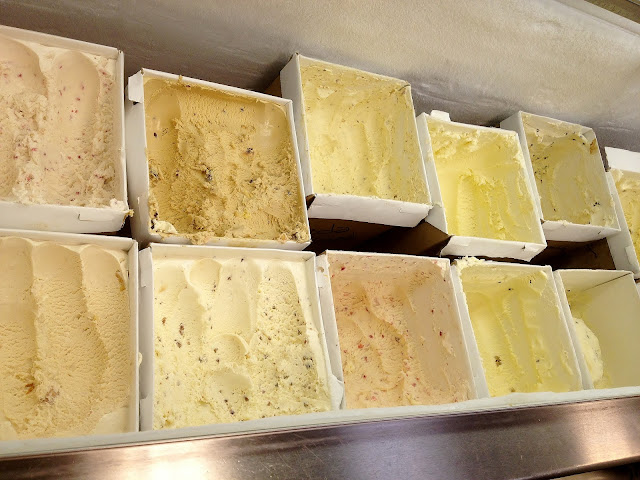 By the time we finished our ice cream, the joint was really hopping and folks were waiting for tables so we decided to say our good-byes. As we were getting ready to leave, however, there was a bit of a commotion at the front and we were shocked to see that Lumpy was being cuffed by a police officer who had come in to sample Lumpy's ice cream! Upon tasting the goods, the officer apparently had concluded that Lumpy's Ice Cream was simply too good to be legal.

Luckily for Lumpy, the good officer relented to pleas from the crowd and released Lumpy, much to everyone's relief (including mine, as I was getting worried that I might have to use my rusty lawyering skills to come to Lumpy's defense).

If you ever find yourself in Wake Forest or within driving distance, make sure to stop at Lumpy's Ice Cream for some of the best ice cream you'll ever have the pleasure of experiencing.  As their slogan boasts, you're just a scoop away from a smile--or a lump away, to use their term for a scoop. And don't worry, it's perfectly legal to indulge as much as you want in this decadent treat, even with flavors like Rum Raisin, Bourbon-Bacon, and Whisky & Clover.

PPS:  Just to be clear, none of Lumpy's ice cream folks (including Lumpy himself) were actually arrested or cuffed or injured in any way during the Grand Opening, and all was done in fun.