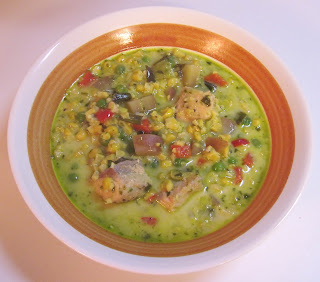 Earlier this year I had the pleasure of tasting a marvelous salmon & corn chowder with pesto swirl made by my friend Robin Arcus. She was kind enough to share her recipe with me, which she had adapted from Diana Schwarzbein's Schwarzbein Principle Cookbook. Robin adds a package of Cope's Dried Sweet Corn (from Pennsylvania) to her recipe, and uses a BBQ-marinated frozen salmon from Costco. She generously gave me a package of the corn as well as the marinated salmon so that I could make her version of the recipe.

I made a few "tweaks" to Robin's recipe, and below is my version. The most significant change I made was to substitute evaporated milk for the heavy cream. This reduced the fat content of the soup without altering the flavor, but it did result in a much lighter mouthfeel that lacked the satiny richness of heavy cream. If fat isn't a concern, use 1 cup of heavy cream instead of the evaporated skim milk. Robin also uses dry pesto, and prepares it with a little less water and oil than one would normally use to reconstitute it. I used fresh pesto, which made the soup greener in color than hers was.

Note: If you can't get Cope's Dried Sweet Corn, I would recommend using 1 cup of fresh or frozen (thawed) corn kernels added at the same time as the peas.  And if you use fresh or frozen (thawed) unseasoned salmon, use 1 pound and I would recommend marinating it first for 30 minutes to 1 hour in olive oil seasoned with a savory BBQ rub like Bad Byron's Butt Rub.  If you make this recipe, please leave a comment to let us know how you made it and how it turned out.

If using Cope's dried corn, empty package into a bowl, add just enough water to cover, and soak for at least 3 hours in the refrigerator.

Melt butter in a large soup pot, then add onion, garlic and red pepper, and saute until softened, about 5 to 7 minutes over medium heat.  Stir in potatoes, reconstituted Cope's corn (if using), salt, pepper & stock. Bring to a boil, then reduce heat and simmer until the potatoes are softened, about 10 minutes. Add salmon chunks and milk, reduce heat to a low simmer and cook until salmon begins to flake with a fork, about 5 minutes. Add green peas (and fresh or thawed corn kernels if using instead of Cope's corn) and pesto, and cook over gentle heat for a few more minutes until the salmon is done--be careful not to boil.  Taste, adjust seasonings if desired, and let sit for a few minutes before serving.  Refrigerate any leftovers--amazingly, this soup is even better the next day!