Email ThisBlogThis!Share to TwitterShare to FacebookShare to Pinterest
Pork chops and plantains are traditional Cuban foods, and my recipe is based on very old recipes dating back several generations. The Spanish name is "Costillas de Puerco con Machuquillo," which translates to "pork chops with mashed plantains," and the zesty marinade is called "mojo." This very rich and highly flavorful dish requires at least 1 hour for marinating and then about an hour or so for cooking, but it's not difficult and is worth the time. If you're not familiar with Cuban food, this is an excellent introduction because the flavors are approachable and familiar rather than "exotic," and it's not hot or spicy (most Cuban food doesn't use hot peppers).

For a healthier dish I reduced the salt (trust me, you won't miss it), cut back on the amount of fat used in old recipes and suggested Spanish olive oil as an alternative pork fat.  Also, traditional recipes call for frying the plantain rounds in a lot of oil, then mashing them with the cracklings and re-frying the mash in pork fat. Instead of double-frying the plantains, I boiled them first and then fried them after mashing.

The following recipe will serve two, and I don't recommend simply doubling all the ingredients for more servings because it unbalances the marinade and probably also makes too much mashed plantain. I'm developing a 4-serving version and hope to post that in the future.

*Note: You can find bottled bitter orange juice ("naranja agria" in Spanish) in the Mexican or Latino section of many larger supermarkets, at Mexican or Latin American or Caribbean markets or "tiendas," and at some gourmet or specialty-foods stores. Goya is a popular brand. Alternatively, you can substitute a 50/50 blend of regular orange juice (not calcium-enhanced) and fresh-squeezed lime juice.

To prepare the pork chops and marinade: Trim most of the fat from the edges of the pork chops and cut into small pieces - you'll fry these to make the cracklings, so refrigerate until ready to fry.  Use a mortar and pestle to mash together the garlic, salt, pepper, oregano and cumin (if you don't have a mortar and pestle, just crush the garlic with a fork and then mince as finely as possible, use the edge of your knife to scrape the garlic and juices from your cutting board into a bowl, then mix in the spices). Place the garlic mixture into a bowl and stir in the bitter orange juice and wine - I pour some of the juice or wine into my mortar to rinse out any remaining garlic mash and pour that over the pestle's mashing end and into the bowl. Place the pork chops and onions in a shallow lidded container or resealable plastic bag, pour the marinade ("mojo") over them, cover or seal and shake the bag, and place in refrigerator to marinate at least 1 hour.

To make the plantain mash: When you're ready to start cooking dinner, begin with the plantains.  Bring the water and salt to a rolling boil.  While the water is heating, trim the ends off the plantains and peel by cutting a slit through the skin down the length of each plantain, then cutting the plantains into rounds about 1 1/2" to 2" thick, and then using the slit in each round to help you peel off the thick skin.  Dip each round on all sides in the bitter orange juice and set aside until the water is at a rolling boil (this adds a nice touch of citrus AND keeps the raw plantains from browning), then slip the plantain rounds into the boiling water, reduce heat just a little and boil until tender, about 20 to 30 minutes. While the plantains are boiling, start cooking the pork chops.

To cook the pork chops:  Heat the oil or fat in a large skillet (I use cast-iron) over medium-high heat. Remove the pork chops from the marinade--do NOT discard the marinade!--and sear on both sides to a nice deep brown.  Pour in the marinade and onions, reduce heat to low, and simmer, uncovered, until the marinade has evaporated, the onions have caramelized and the pork chops are cooked through (don't worry, the pork chops will remain tender). This will take anywhere from 45 to 60 minutes, and you'll want to turn the pork chops over about halfway through. While they're simmering, finish making the machuquillo (plantain mash).

To finish making the plantain mash: Once you've started the pork chops simmering, make the cracklings by heating the oil or fat in a small or medium skillet (I use cast-iron) over medium heat, adding the pork trimmings and frying until brown and crispy. You'll want to check on the boiling plantains during this time - if the cracklings are done before the plantains are tender, simply remove the skillet from heat. Once the plantains are tender, use a slotted spoon to remove from pot and place in a bowl (discard the boiling water). Mash the plantains, leaving them a bit lumpy.  Add the mashed plantains to the skillet with cracklins, stir and cook over low-medium heat, stirring regularly, until any excess liquid has evaporated (you can leave the plantain mash on low heat until the pork chops are done, so long as you stir them from time to time). 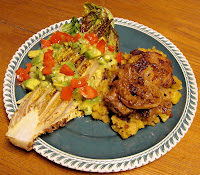 Serve the cooked pork chops and caramelized onions over a bed of plantain mash, and enjoy!

PS: The recipe for the seared romaine half with chunky avocado dressing will be posted soon, so be on the lookout for it.