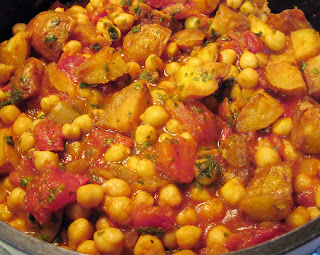 This vegetarian Indian recipe is hearty, healthy, moderately spicy and quite "user friendly" for palates that may not be as accustomed to the exotic and unusual flavors in other Indian recipes. If you want a hotter dish, add the optional green chiles and/or increase the amount of ground red pepper.

Instead of using dried chickpeas that have been soaked overnight and boiled until tender, my version saves substantial amounts of time by using canned chickpeas and canned diced tomatoes.

Traditionally served with a deep-fried bread called poori or with naan, an oven-baked flatbread, you can also serve Masala Chickpeas & Potatoes over rice or simply as-is. I like to remove the whole spices before serving, so that no one is "startled" by biting into a whole cardamom or other spice. This recipe serves two.

Melt the ghee or heat the oil in a deep, lidded saucepan over medium-high heat. Add potatoes, bay leaf, cinnamon & cardamom, and saute until the potatoes are just soft and light gold. Add onion and saute until soft and starting to turn gold. Stir in the ginger & garlic, saute for a minute. Add chickpeas and sprinkle with red pepper & turmeric, stir to thoroughly combine and saute for a few more seconds. Add tomatoes, water and green chiles if using. Stir, cover, reduce heat and simmer gently for about 15 minutes. Uncover and stir--if most of the liquid has NOT evaporated, then simmer, uncovered, for a few more minutes, stirring occasionally, until virtually all the liquid is gone (it should be moist but not "runny"). Remove from heat, taste for balance and add salt as desired, then stir in the cilantro or parsley and serve.

PS:  If you're missing several of the spices listed for this recipe, you can make a "cheater's version" by substituting 1 1/2 to 2 tsp of a good-quality garam masala spice blend in place of all of the following (omit these): bay leaf, cinnamon, cardamom, red pepper & turmeric. The flavor will probably be different, depending on the component spices in your garam masala blend, but the dish will still be quite tasty.