Email ThisBlogThis!Share to TwitterShare to FacebookShare to Pinterest
If you saw my recent post on how to smoke spare ribs, you got a sneak peak of KLB's BBQ Sauce, an authentic South Carolina mustard barbecue sauce that's finger-lickin' good on ribs.

Well, now it's time to formally introduce you to this big, bold, savory and sassy sauce from our southern neighbor.

Created by Kevin and Latonya Bobo of Charleston, SC, KLB's BBQ Sauce is the real deal. This is not a honey mustard or a sweet barbecue sauce. Rather, this robust sauce delivers that trademark mustard tang that brings out the best in anything you grill, smoke, broil or roast.

Not quite spicy enough to call "hot" but with a pleasant peppery finish, the assertive flavors in this sunny yellow mustard barbeque sauce mellow and deepen during cooking, becoming a well-balanced complement to pork, beef, chicken and game meats.

As the Germans discovered centuries ago, mustard pairs perfectly with pork (and South Carolina's tradition of mustard BBQ sauce can be traced back to German immigrants), so we first tried KLB's BBQ Sauce on smoked spare ribs, slathering it on the ribs during the final 30 minutes of smoking.

The results were amazing: The sauce developed a thin "crust" beneath which some of the still-saucy sauce had melded with the natural juices of the ribs for a mouthwatering burst of flavors, and the meat below all the sauciness was succulent and juicy.  WINNER!!

Although we didn't do it, you could certainly serve more of the sauce at the table as a dipping sauce for folks who like to dip. Likewise, I'm sure you could stir the sauce into pulled or chopped pork barbecue, or use it on beef ribs. 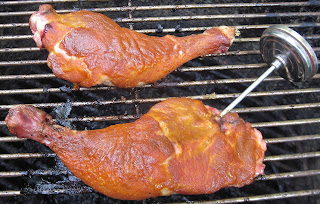 We used essentially the same smoking & saucing technique on smoked chicken legs (but shortened the cooking time, of course), and once again KLB's BBQ Sauce did not disappoint: The sauce kept the chicken moist and imparted a subtle mustard & spice flavor that gently infused the flesh.

Finally, Greg also used some of the sauce to make a mustard slaw: He shredded a head of white cabbage and mixed in enough sauce to coat the cabbage, then stirred in a little apple cider vinegar and sugar, tasting and adding more vinegar and sugar until the balance of flavors was just right.

If you like a savory, tangy mustard slaw without the extra fat of a mayo-based slaw, use KLB BBQ Sauce as your slaw sauce base. We served the mustard slaw with the smoked ribs, and it would be great with fried fish, pulled pork, on a burger or hot dog, or anywhere else you'd serve slaw.

We haven't yet tried this barbecue sauce on seafood, but I bet that tuna steaks and shrimp & veggie kabobs would taste quite good if marinated and then grilled or broiled with KLB BBQ Sauce. If you try it on fish or seafood, please leave a comment to let us know how you liked it.