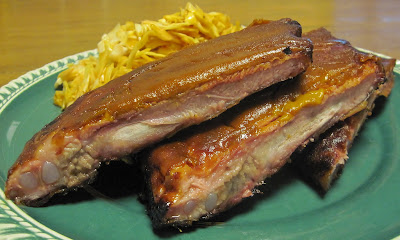 If you're a BBQ purist, the only way to make ribs is on a smoker. There's simply no other way to achieve that unmistakeable slow-smoked flavor and mouthwatering tenderness.

The secret to perfectly smoked, succulent ribs with that prized pink "smoke ring" is to know how hot to keep the smoker, and how long to cook the ribs. Admittedly, there's as much (some would say more) art or "feel" involved as there is science. But even less-than-perfect smoked ribs are usually at least pleasantly edible, and if they're half-way good they'll be better than ribs cooked indoors. The more you use your smoker, the better you'll get at it, so keep on smokin'.

Here's Greg's step-by-step guide for how to cook spare ribs on a smoker.

1. Using your choice of wood chunks or chips in your smoker, bring the temperature to 225°F.

2. While the smoker is heating, use a sharp knife to cut through the membrane on the back side of the ribs, lifting and pulling off what you can (don't worry if it doesn't all come off). 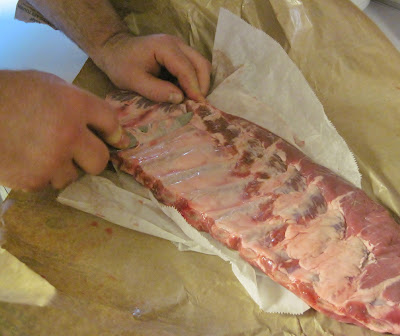 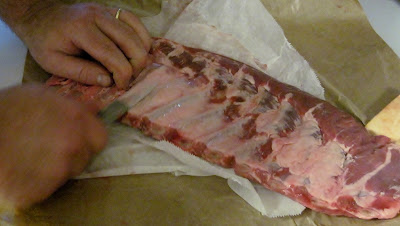 3. If you want to use a dry rub to season your ribs, now is the time. Sprinkle the BBQ rub on both sides of the ribs, gently patting it onto the meat. Don't actually rub it on, as that can break down the meat fibers and dry it out while it cooks. For this demo, Greg chose not to use a dry rub because we were going to try a new BBQ sauce on the ribs and wanted to taste the true flavor of the sauce. When the smoker reaches 225°F, place the ribs membrane-side down on the smoker grate.

4. Cover the smoker and let the ribs cook for about 2 1/2 hrs or until they are close, but not yet, done. You'll want to monitor the smoker to keep the temperature steady, but resist the urge to open the smoker until well over an hour has elapsed because the more you open it, the longer it will take. Once the ribs are getting pliable but not yet yielding to a twist with tongues, they're ready for saucing. Below is what the ribs looked like after 2 1/2 hours on the smoker.

After spreading that sauce around to cover the surface, he flipped the ribs and liberally poured sauce on the "meaty" side. 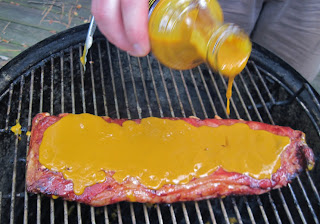 He used the back of the grill tongs to spread the sauce, but you can certainly use a basting brush or sauce mop if you have one handy. 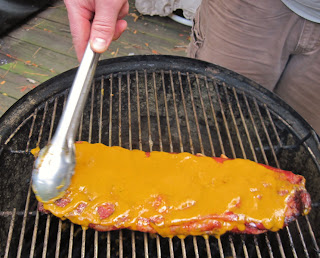 6. Close the smoker and continue to cook until the ribs will "give" to a gentle twist of the tongs: This can take anywhere from 15 to 30 minutes, or longer. You want the ribs to be tender enough to pull apart when you twist them, but not falling apart when you handle them, because the latter often means dried-out meat. Below is what the ribs looked like when they were done. 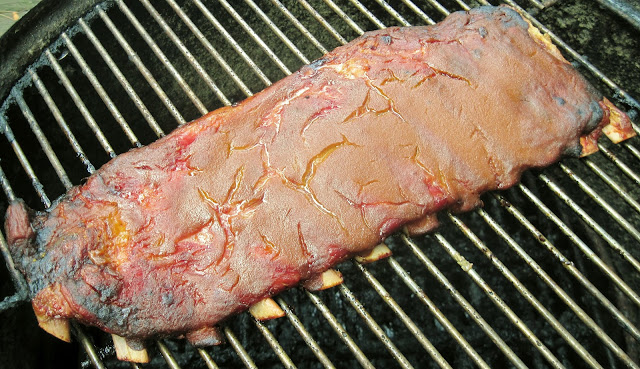 And here's what they looked like, up close and personal.

Note the pink smoke ring just below the sauce "crust." If you're new to smoking, don't let the "pink" fool you into thinking that the meat is undercooked. The pink ring directly beneath the surface of the meat is a natural result of the smoking process. As long as the ribs are tender enough to pull apart, they're done.