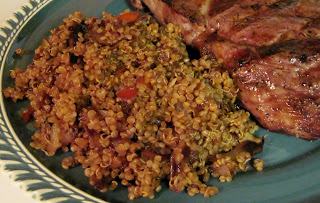 This quinoa recipe can be served as a vegetarian or vegan entree (assuming you caramelize the vegetables in oil and not bacon fat), or as a side dish for steak (as shown), pork, roast chicken or turkey, venison or other hearty meat or poultry.

The secret to caramelizing onions and other vegetables is to Be Patient and Let Them Be--in other words, you must resist the urge to stir them or otherwise disturb them as the slowly cook down into a golden-sweet and deeply savory ambrosia. Caramelized vegetables are all about the flavor, not the appearance, so don't expect them to be bright and beautiful and instead accept them as the mysteriously dark and sultry tempters of your taste buds.

While the method I've described below does take some time, it is well worth it. And here is my disclaimer: I am merely a self-taught home cook, not a chef or a culinary school graduate, so I have no idea if my method is "orthodox." All I know is that it results in tasty caramelized veggies, and that is good enough for me. If you use a different method that works and produces tasty results, by all means please leave a comment below because I love reading and learning about cooking. 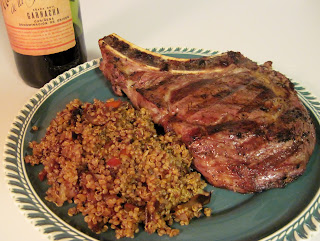 Heat the oil and/or fat in a large frying pan over medium-high heat. Add the onions and stir to coat. Slice the green onions, including tops, and stir in. Mince the garlic, stir in, then spread the mixture to cover the bottom of the pan in a thin layer. Reduce heat to medium-low and allow to cook, undisturbed, for at least 30 minutes.

While the onion & garlic mixture is cooking, dice the tomatoes and chop the peppers, then set them aside to be added after the onion-garlic mix has cooked for at least 30 minutes. After the time has elapsed, stir the peppers & tomato into the onions & garlic, raise heat to medium and allow to cook until you hear sizzling. Stir once more, spread to cover the bottom of the pan, reduce heat to medium-low and allow to cook, undisturbed, for at least 30 more minutes. After that time, stir once more, spread, and let cook for at least another 15 minutes--by now, the veggies should be pretty well broken down and the onions & garlic turning golden. If not, let them cook longer than 15 minutes until they do. 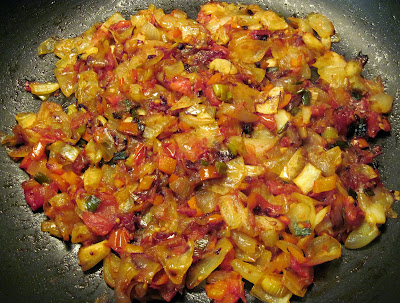 Combine the quinoa and water in a small pot and bring to a boil. Stir in the dried herbs, reduce heat to low, cover and cook for 15 minutes. 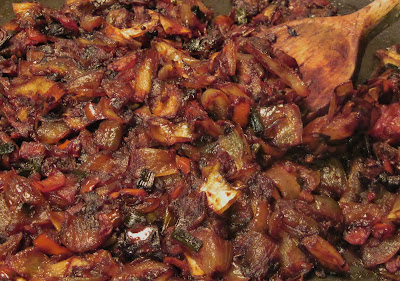 After the quinoa has cooked for 15 minutes, turn off the burner and let it sit, covered, for 3 to 5 minutes. At this point, remove veggies from heat if they are done, taste and season with salt & pepper. When the quinoa is done, uncover, fluff with a fork, and gently fold into the caramelized veggies (I use a silicone spatula). Taste for balance and season with a little more salt/pepper if desired.
Zestfully yours,
Gloria