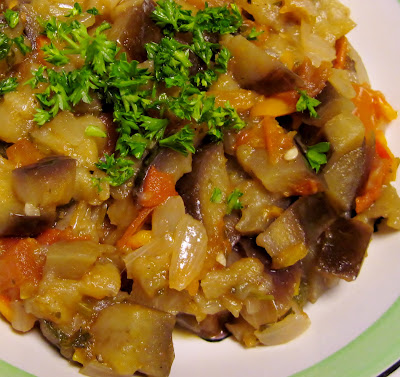 This classic Cuban recipe can trace its roots back to the early 1900s, and possibly further back in time.

Instead of drowning the eggplant in tomato sauce, curry, or cheese like other ethnic recipes do, this eggplant stew allows the vegetable's distinctive, slightly tangy flavor shine through, without any bitterness.

Traditionally made with cubed ham, my version is vegetarian and vegan. If you wish, you can add cubed cooked ham when you add the wine.

Salting the eggplant and squeezing out the liquid keeps the eggplant from absorbing a lot of oil -- otherwise the eggplant will act as a sponge, sopping up all the oil and thirsting for more, resulting in a soggy, oily dish. Don't worry about too much sodium: You'll rub off the salt before cooking and a lot of it will also be removed when you squeeze out the liquid.

Because the eggplant is not peeled, the cubes will not disintegrate into mush but rather hold their shape while developing a lusciously buttery texture. And don't worry, the peel will not taste bitter.

Serve Cuban eggplant stew as a side dish with beef or pork, or as a vegetarian or vegan entree over cooked cooked rice.

Thinly slice the unpeeled eggplant, about 1/4" thick slices.  Liberally salt the slices on both sides, then place in a single layer in one or more large colanders in your sink. To help press out liquid, place a heavy, large bowl over the eggplant slices in each colander. Let the eggplant drain for about half an hour.

While the eggplant is draining, heat the oil in a deep, large skillet over medium heat. Add onion, garlic & peppers and saute until tender and onion is translucent. If this is done before the eggplant is done draining, simply lower heat as low as possible (or remove skillet from heat altogether).

After the eggplant has finished draining, use a paper towel or kitchen towel to rub off the salt, then gently squeeze each slice to remove additional liquid. Cut the eggplant into cubes, add to skillet and cook over medium heat, stirring regularly, for 10 minutes. If the vegetables begin to look too dry and at risk for browning, add just a little more oil (as little as possible).

Stir in the tomatoes, lemon juice & parsley, bring to a simmer and cook for 5 minutes. Pour in the wine, sprinkle with black pepper and stir. Bring to just barely a boil, then cover, reduce heat to low and cook at a gentle simmer for half an hour or until the eggplant is tender. Serve garnished with a little chopped parsley. Serves 3 to 4. Leftovers can be refrigerated and reheated or enjoyed cold.