Email ThisBlogThis!Share to TwitterShare to FacebookShare to Pinterest
When my Mom made "pollo frito" or fried chicken, it wasn't battered or dredged in flour.  Unlike American fried chicken, Creole style Cuban fried chicken is bare or "naked," and marinaded in a zesty citrus marinade called "mojo" before pan-frying with garlic and onions -- and in my Mom's version, with bell pepper thrown in, too.

Bitter orange juice ("naranja agria"), usually Goya brand, can be found in supermarkets located in areas with Latino populations, as well as in some specialty-foods or gourmet stores and in Latin American tiendas, of course. If you can't find bitter orange juice, substitute a 50-50 combination of regular orange juice and fresh lime juice.

My Mom always used green bell peppers for her pollo frito, but I like the mellow sweetness of red bell peppers in this dish. You can use any color of bell pepper -- or, if you want to spice things up, add some chopped hot peppers (but keep in mind that Cuban cuisine generally doesn't use hot chilies).

The recipe below serves 2-4 people, and you can multiply it as needed. Pollo Frito a la Criolla is usually served with cooked rice, but you can serve over noodles, pasta or even quinoa if you prefer. 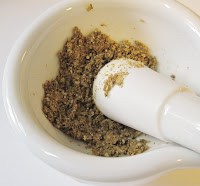 Use a mortar & pestle to mash together the garlic, oregano, cumin, salt & pepper into a thick, fairly dry paste as shown in the photo above on the right. Stir in the orange juice and set aside. Place the chicken, sliced onion and pepper strips in a large, resealable plastic bag. Pour in the marinade, seal the bag and agitate to mix together. Marinate in refrigerator for at least 1 hour, and preferably a few hours (I start it in the morning on the day I plan on cooking the chicken).

Heat the oil and/or fat at medium-high in a large, heavy and deep frying pan or skillet -- cast iron is perfect for this, and is what my Mom used. When a drop of water sizzles in the hot oil, remove the chicken pieces from the marinade (reserve the marinade, peppers and onions) and carefully place the chicken in hot oil. Brown the chicken on all sides.

Reduce heat to medium, add the onions and peppers, and then carefully pour the marinade into the skillet.  Stir, cover and cook for 25 to 30 minutes until chicken is done, turning once after 15 minutes. 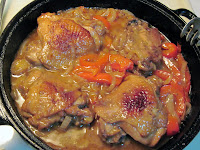 Uncover, raise heat to medium-high and continue to cook another 5 to 10 minutes until the "gravy" has thickened and the peppers and onions are soft.

Serve over cooked rice, and if you're not concerned with fat then spoon a little of the gravy over the chicken -- it is quite tasty, albeit very high in fat.

Southern style greens pair nicely with Cuban fried chicken, or you can serve with a vinaigrette-dressed tossed salad for a lighter side dish. 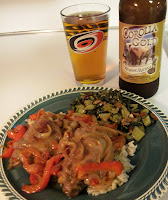 If you are wondering what kinds of "adult beverages" to serve with Pollo Frito a la Criolla, I recommend a crisp lager or a pale ale (Corolla Gold from Weeping Radish is shown on the left).  For wine drinkers I recommend a lighter dry white wine with mineral or citrus notes rather than a rich, oaky chardonnay.