The "Skinny" on Kale Chips: Awesome or All Hype? 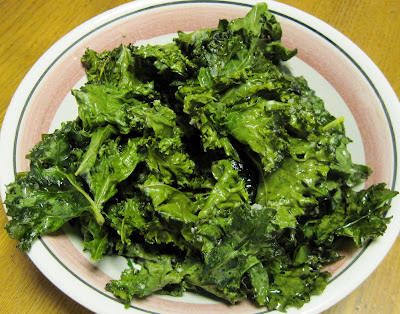 Lately I'd felt like the last person left on the planet who had never eaten or tried making kale chips.

Honestly, I had remained stubbornly skeptical about all the hype surrounding kale chips, doubting  the laudatory claims regarding taste, crunch and ease of preparation.

Well, having now witnessed the making of kale chips -- Greg cooked them -- and eaten them, I can declare myself the newest member of Kale Chip Nation, albeit merely an "associate member" rather than a full-fledged, card-carrying, kale-bible-thumping convert.

Yes, kale chips can be delightfully crunchy and delicately crisp, almost airy:  When baked, the leaves are far thinner than any potato could ever be sliced. Frankly, I enjoy that lighter, fragile crispness more than I do the average potato chip. On the other hand, if you're a big fan of thicker-cut potato chips, kale chips might not be for you.

As to taste, baking does soften and mellow any bitterness, resulting in a surprisingly mild and subtle flavor that was pleasantly generically "green" and less distinctly "kale" than I had expected. For me, that was a huge positive because I'm not crazy about the flavor of kale unless it's well-seasoned and complemented by garlic, sun-dried tomatoes, bacon or fatback or other such ingredients. 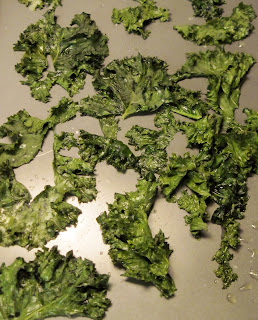 Was the preparation and cooking process as easy as typically touted? Not really. If you want to avoid soggy, limp kale "chips" it's crucial that the leaves be DRY before tossing with oil and seasonings, and that takes a little time and effort. The few leaves that weren't completely dry did not crisp up during baking. Also, I was not prepared for the smell, which was rather unpleasant as it often is when cooking collards, kale, cabbage, cauliflower and the like. So, in addition to the expected cleanup of the baking sheets, I also had to air out the kitchen after Greg made the kale chips.

That said, it isn't especially hard or overly time-consuming to make kale chips, and I'd be willing to try making them myself the next time we get kale. We learned that you do need to pay special attention to a few things for best results. And that is the purpose of this post.

Here are our tips for awesomely crunchy, savory kale chips:

1. Dry the leaves thoroughly after washing and removing the stems. I cannot stress this enough. A salad spinner helps tremendously with this. Otherwise, use paper towels or clean terrycloth kitchen towels to pat the leaves as dry as possible. Then, regardless of drying method, spread the leaves in a single layer on paper towels to finish air-drying before proceeding.

2. Don't use too much oil.  When ready to bake, place the leaves and oil in a large resealable plastic bag, seal and gently shake, using your hands to gently manipulate the bag so that all the leaves end up with a light coating of oil. This is easier to do (and to clean up) than tossing in a bowl. For 1 average bunch of kale, 1 to 2 Tbs of olive or other oil should be sufficient. Start with less because you can always add a little more to the bag. 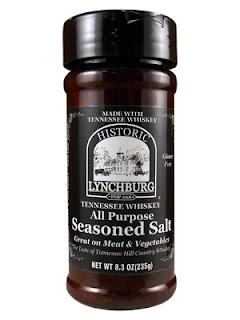 3.  Don't over-season. Place the oil-coated kale leaves in a single layer on one or more baking sheets and then very lightly season with a pinch or two of sea salt or kosher salt, a few grinds from your pepper mill, or perhaps a little granulated garlic or your favorite savory seasoning blend such as Tennessee Whiskey All-Purpose Seasoned Salt (shown on left). Because the kale chips turn out so light and airy, you can easily over-salt or over-season if you're not careful.

4. Don't over-bake or else the kale will get bitter. Greg baked the leaves at 275°F in a preheated oven for about 20 minutes, turning once after 10 minutes and then letting them bake until crisp and just very lightly golden on the edges. If you let the chips burn or get too brown, they will taste unpleasantly bitter.

5. Run your kitchen exhaust fan and/or open the windows when you make these. Like other vegetables in the Brassica family (collards, broccoli, cauliflower, etc.), the kale will stink when you cook it. Do not let that scare you: The chips taste much better than their odor suggests.

So, are you a fan of kale chips? Do you have any tips for making them? Please let us know in a comment below - we'd love to hear from you!