It's not too early to start preparing for spring and the official start of the barbecue & grilling season -- and for those hardcore outdoor cooks, firing up the smoker or grill is a year-round practice requiring a constant supply of sauces and seasonings. Either way, now is the time to stock up on your favorite BBQ sauces and also pick out a few new ones to try. There's no better place to get started than our list of the top ten best-selling barbecue sauces for 2012 at the Carolina Sauce Company:

1. Wells Hog Heaven BBQ Sauce: Our top-selling product from North Carolina and our all-time best-selling sauce, Wells is also our best-selling barbecue sauce for 2012. This eastern NC vinegar-based barbecue sauce is thin and tangy with a touch of spice, making it the right choice for enjoying Carolina style barbecue the way folks do in the eastern half of the state. In addition to being excellent on smoked pulled pork, it also doubles as a tangy marinade and basting sauce for grilled chicken.

2. Bone Suckin' Barbecue Sauce: This all-natural, gluten-free and great-tasting Western NC BBQ sauce is a tangy-sweet blend of tomatoes, cider vinegar, honey & molasses plus savory seasonings & spices for a full, fun-loving flavor the whole family will enjoy. Whether you slather it on ribs, chicken, fish, shrimp or veggies, you're guaranteed to get kudos when you grill with the award-winning, world-famous Bone Suckin' Sauce! 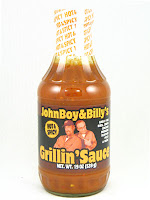 3. JohnBoy & Billy's Hot & Spicy Grillin' Sauce: A relative newcomer to the Carolina Sauces online store, this medium-hot barbecue sauce hails from North Carolina and delivers tangy-spicy mustard flavor that will complement all your favorite grilled foods. If you enjoy a big, bold BBQ & grilling sauce that packs a peppery punch, this one won't disappoint.

5. Wells All-Purpose Ribs & Chicken Sauce: Not nearly as famous as its wildly popular vinegar-based sibling but with its own loyal following, this rich tomato-based barbecue sauce is for everything other than pulled or chopped pork BBQ. Nowhere near as sweet as Memphis or Kansas City style sauces, its saucy tomato flavor makes it a great choice for ground beef recipes (meatloaf, burgers, chili, casseroles, etc.) as well as for finishing or dipping ribs, chicken, veggies and shrimp or seafood.

6. NC BBQ Sauce Gift Set, Mild: Despite being added to our online store fairly late in 2012, our North Carolina barbecue sauce gift set (mild version) proved just as popular as it has been in years past, finishing sixth among all our barbecue sauces. The current version of this "taste of NC BBQ" gift features a full-size bottle of three different sauces representing the three dominant styles of NC barbecue (Wells Hog Heaven for the vinegar east, Bone Suckin' Sauce for the tomato-vinegar west, and JohnBoy & Billy's Original Grillin' Sauce for the mustard southern coast) plus a bottle of Bone Suckin' Rib Rub, a sweet & savory BBQ dry rub that's great with Boston butt, ribs (pork or beef), brisket, chicken, chops, and even for seasoning veggies, seafood, popcorn, french fries, hash browns and more.

7. Jim's Own Homestyle Barbecue Sauce:  Made in the classic Piedmont (aka western NC or Lexington) style, this tangy-sweet, mildly spiced BBQ sauce is one of my personal favorites, both on pulled pork BBQ and as a marinade & grilling sauce for chicken and shrimp. Perhaps what I enjoy most is its versatility in the kitchen as well as on the grill: You can bake, broil, braise and even stir-fry with it, and it enhances baked beans, sloppy joes, meatloaf and even burgers (mix into the raw ground beef before forming patties, then grill for mouthwatering, juicy results). The mild Homestyle is the most popular flavor, but Jim's Own Sauce is also available in Hot, Smokey, and Mustard. 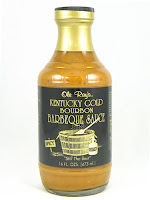 8. Ole Ray's Kentucky Gold Bourbon BBQ Sauce: Similar to a South Carolina mustard barbecue sauce but with a thicker texture and mellower sweeter flavor, this rich barbecue sauce has a spicy kick from chili peppers and earthy, smoky depth from a splash of real Kentucky bourbon. Excellent for ribs, chicken, mutton, venison and other hearty fare, it also pairs nicely at the table with sausages and even works as a pretzel dip!

9. Ole Ray's Pork-O-Licious BBQ Sauce: This old-fashioned southern-style barbecue sauce is reminiscent of the vinegar sauces from eastern NC, but with a mellower flavor. Ideal as a mopping sauce, marinade or splashed on pulled or chopped smoked pork, it's a natural with other pork cuts and also quite good with chicken, beef and game meats. 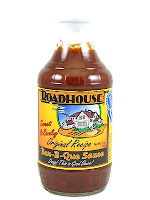 10. Roadhouse Original BBQ Sauce: Last but not least on our list of top-selling barbecue sauces for last year, this thick, sweet and smoky BBQ sauce is based on an old family recipe that's endured the taste of time. The sweetness comes primarily from tomatoes plus just the right amount of pineapple and raisins, all tempered and balanced by vinegar, Worcestershire sauce and other savory ingredients plus a gentle touch of hot sauce to add a feisty finish. Use it on anything and everything you toss on the grill or take out of the smoker, and make sure you have enough for everyone to get seconds!

PS:  This is our final in a series of posts listing the top-selling products in each major category at the Carolina Sauce Company.  You can see all the lists, including the list of the overall best-selling products across all categories on out Best-Selling Products page.