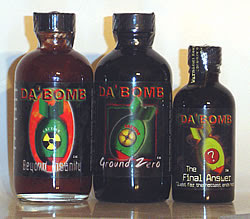 This is the first in a series of posts featuring the hottest hot sauces available from the Carolina Sauce Company. While there are numerous different types of hot sauce currently on the market -- including traditional vinegar & pepper based hot sauces, fruit-flavored hot sauces, capsicum extract or pepper mash fortified hot sauces, and then regional styles like Caribbean, Mexican, African, etc. -- perhaps no category of hot sauce draws more attention than the ultra-hot hot sauces. Most serious hot sauce fanatics consider ultra-hot hot sauces to include those that are made with capsaicin extract or oil, thereby boosting the intensity and lingering effect of the heat in the hot sauce beyond anything that could otherwise be reached by using "natural" peppers. Da Bomb Hot Sauces made their reputation on upping the ante whenever the folks who make Dave's Insanity Sauce released a hotter version of their original "Hottest Sauce in the Universe." Thus, Da Bomb's first entry into the ultra-hot hot sauce arms race was Da Bomb Beyond Insanity, which rates around 120,000 Scoville Units (SUs) on the hot sauce heat scale. This level puts Da Bomb Beyond Insanity at #12 on our list of Hottest Hot Sauces, several places above Dave's Insanity Sauce.

Not to be outdone when Dave's Gourmet released Dave's Ultimate Insanity Sauce, Da Bomb responded with its release of the even hotter Da Bomb Ground Zero. Almost twice as hot as Da Bomb Beyond Insanity, Da Bomb Ground Zero sits at #3 on our list of Hottest Hot Sauces available at the Carolina Sauce Company. But that wasn't enough, especially once Dave's Gourmet started issuing their limited edition Dave's Insanity Private Reserve hot sauce. Instead, Da Bomb came out with its own weapon of mass destruction, the aptly named Da Bomb The Final Answer. Topping our list of Hottest Hot Sauces, Da Bomb The Final Answer rates 1.5 million SUs, which is three times hotter than military pepper spray. My verdict is still out on whether Dave's 2008 Private Reserve edition can meet or beat that heat level (our batch of the 2008 edition should arrive next week, and then I can report back).

So what do these ultra-hot hot sauces taste like? Honestly, I can't taste the different fruit extracts, spices and herbs listed on the label because of the extreme pain that just the tiniest drop of any of them inflicts (and I need to protect my taste buds as a "professional asset"!). A word to the wise: Da Bomb Hot Sauces are not toys, and are to be handled with extreme care. These ultra-hots are technically food additives (rather than hot sauces) meant to be used in tiny amounts during cooking (i.e., 1 drop will heat up an entire pot of chile), and are not meant to be splashed on served food. But if you collect hot sauces or are looking for a gift for a passionate chilehead, or if you are relatively experienced with ultra-hots, Da Bomb Hot Sauces are an indispensable addition to the collection or cupboard.