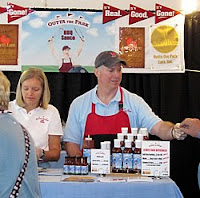 The North Carolina State Fair ended this past Sunday, and as usual we enjoyed sampling a variety of what I call "only at the Fair" food, taking in the sights & sounds & smells, and visiting with some of our good friends who make delicious NC products, including Beth & Scott Granai of Outta the Park BBQ Sauce who were busy sampling their award-winning sauce in the Gotta Be NC tent. Outta the Park recently won its second Scovie Award, and is one of my personal favorites with its rich tomato flavor and zippy peppery kick that's mildly spicy. Too bad they weren't selling ribs or chicken slathered in Outta the Park BBQ Sauce, or I'd have had some for lunch! Instead, I went back to one of my old favorites, the "Hot Fish" booth located directly across from the Dorton Arena Waterfall. Their fried tilapia sandwich is the best fried fish I've had: Cooked to order using the freshest tasting tilapia (no "fishy flavor" at all), fried at the perfect temperature so that there's not a drop of grease, and with a crispy golden batter. I splashed the fillet generously with Texas Pete Hot Sauce and topped it with a dollop of tartar sauce, and then enjoyed my sandwich at a picnic table while watching the rain clouds approach. 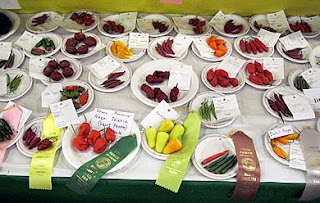 Once the rain arrived, I spent a couple of hours checking out the different exhibit halls where all sorts of produce, animals, arts & crafts, and cooking competition entries were displayed. There was quite an extensive variety of different chile peppers on display, including several different strains of habanero peppers such as Naga Jolokia and chocolate (brown) habaneros, datil peppers, cayennes, jalapenos, and adorable little "micro-peppers." Also on display were gigantic pumpkins and watermelons, sweet potatoes of different shapes and colors, lots of apples, and exotic fruit that normally doesn't grow in NC (pineapples, kiwis, and even a banana blossom).

In one of the exhibit halls I discovered a new company selling sinfully delicious cupcakes, including a maple-bacon cupcake which I just had to try. The frosting was as tall as the "cake" part of the cupcake, and delivered a decadently rich maple flavor that was offset quite nicely by the salty bits of bacon sprinkled on top -- but the bacon looked and tasted suspiciously like "Bacos" or other such crumbled imitation bacon, which was a disappointment. If making these at home, I'd have used real crumbled bacon. Nevertheless, the overall flavor of the maple-bacon cupcake was quite good and worth the calories.

Other than my fish sandwich, I stayed away from almost all the other deep-fried foods at the Fair, which this year included all sorts of deep-fried candy bars, deep-fried Oreos, deep-fried pickles and more, as you can see from one of the vendor stands offering a selection of deep-fried fare. I did, however, indulge in the deep-fried pumpkin pie, which was an old-fashioned Southern pie (half-moon in shape like a turnover, so that you can carry and eat it by hand if served "straight up"). This was truly a surprise treat, with a not-too-sweet filling that tasted like good old-fashioned pumpkin pie. I thought that serving it with caramel sauce and powdered sugar was overkill, and when Greg and I went back to the Fair on Sunday for our final visit I got another one and asked them to leave off the toppings -- it was even yummier that way.

Another new food this year was the Krispy Kreme Hamburger. I overheard quite a few fairgoers refer to it as "a heart attack on a plate." This cardiologist's nightmare featured a hamburger patty sandwiched between two Krispy Kreme glazed donuts. No, I did not try it. But they were selling. Instead, I settled for a piece of chocolate-covered bacon, which I had tried last year and enjoyed. Last year it was a crispy-cooked slice of bacon threaded on a skewer and dipped in chocolate coating, then refrigerated to allow the coating to harden into a shell. This year, they took it one step further and added white chocolate drizzle plus sprinkles, both of which I thought were unnecessary and served to overwhelm the flavor of the bacon with too much sweetness. The plain chocolate coating was better.

I'll have more photos up on the Carolina Sauce Co. Facebook page in the near future showing more of the peppers as well as some gorgeously decorated cakes. Unfortunately, my camera's flash stopped working and I ran out of batteries so I wasn't able to take as many photos as I had hoped. As a "fair junkie," I'm already looking forward to next October when the State Fair returns. It'll be interesting to see what new deep-fried concoctions are available next year!