How to Season a Cast Iron Skillet 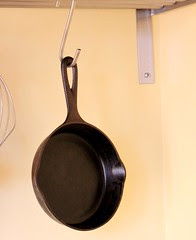 I've been using my trusty old cast iron skillets more frequently these days and suggesting cast-iron cookware for recipes I've been posting, so I thought it might be helpful to post a primer on how to season a cast iron skillet. If you already have an old, well-worn and well-seasoned skillet that's been in your family for a couple of generations or longer, you're very lucky. But if you're new to the wonderful world of cast iron cookery and have a new skillet--or if you have a little-used one that's been developing rust or doesn't yet have a nice, black non-stick seasoned cooking surface--the following steps will help you properly season and care for your cast iron skillet. Even if your new skillet was labeled "pre-seasoned," it's a good idea to follow these seasoning steps before you use it.

If seasoning a brand-new cast iron skillet, first make sure it's perfectly clean: Remove any stickers or labels and wash with soap and water using a soft scrub pad to eliminate any glue or residue from stickers. Completely dry the skillet using a clean dish towel. I like to heat the clean skillet on the stove for a few minutes to evaporate any remaining moisture.

Now comes the fun part. Preheat your oven to at least 350°F (some folks recommend an even hotter oven). While the oven is warming up, tear off a piece from a clean brown paper bag or use a paper towel to rub a generous coat of grease onto the inside of the skillet, completely covering the interior including up the sides. Although some modern seasoning tips recommend using vegetable oil or shortening, old-timers swear by bacon grease or lard as the best way to season a cast iron skillet because vegetable oil or shortening can sometimes leave a "tacky" or sticky surface. I personally haven't had any problems with vegetable shortening and usually use that or bacon grease, depending on what I have on hand.

After you've applied a nice coat of grease and wiped off any excess globs, place the skillet upside down on the top oven rack and place a cookie sheet on a lower rack beneath the skillet to catch any drippings. Let the greased skillet bake in the hot oven for an hour. Don't worry if it smokes or smells like smoke, as that's normal. After an hour, turn off the oven and very carefully remove the hot skillet using thermal oven mitts. Let the skillet cool on top of the stove or other heat-proof surface. With this initial seasoning procedure the skillet is now ready to use, but understand that it will take regular use over time to build up the seasoning layer to the point where you have a truly nonstick surface on which you can fry an egg without additional oil or grease. Feel free to repeat this seasoning procedure from time to time to improve the skillet's seasoning.

There's some disagreement on whether water should ever be used in cleaning a cast iron skillet. For traditional, non-water cleaning, simply sprinkle a fair amount of Kosher salt or coarse-ground cornmeal into the skillet, dip a paper towel, clean cloth or piece of brown paper bag into some oil or grease, and scrub the inside of the skillet until all food residue comes off. The mildly abrasive paste created from the gritty texture of the coarse salt or cornmeal plus the grease will not harm seasoning layer and will clean the skillet nicely. After scrubbing it clean, wipe the skillet out thoroughly and use a clean cloth or paper to wipe a thin coat of grease or oil over the interior to re-season the skillet.

If you feel you must use water to clean your skillet, make sure you completely dry it and then re-season with grease or oil. NEVER place cold water on a hot iron skillet, as it could instantly crack and be irreparably ruined. NEVER use soap or metallic scrub pads as these will destroy the seasoning layer. Likewise, NEVER wash a cast iron skillet in the dishwasher. I personally prefer the old-fashioned non-water cleaning method, although I admit to having used water occasionally to help remove some hard-baked food residue. Regardless of which cleaning method I use on my cast-iron cookware, I always re-apply a thin layer of grease after each use and cleaning.

If you discover some spots of rust in your cast-iron cookware, gently rub with a soap-free steel wool pad, then wash and re-season as if it were brand-new.

One final tip: When cooking in a cast iron skillet, stick to wood or heat-resistant plastic utensils because metal can damage it.