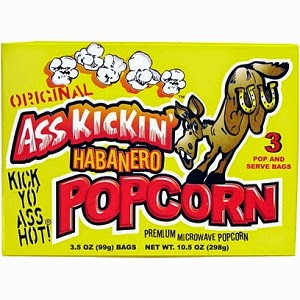 The weather wasn't the only thing that was crazy in April: Last month saw major shake-ups to our list of best-selling sauces, snacks & seasonings at the Carolina Sauce Company. From first-time top-ten finishers to the displacement of longtime list regulars, along with a complete surprise in the number one slot, the following list has quite a few names on it, and a little bit of almost everything we sell on our online store. For more info or to buy any listed product, click on its name below or on the photo shown.

1. Ass Kickin' Habanero Microwave Popcorn: Talk about making a dramatic entrance -- I'm pretty sure it's the first time that this spicy microwave popcorn has broken into the top ten, and it was our best-selling product for April! When supermarket spicy popcorn isn't hot enough and you're craving a hot snack to enjoy with a cool beverage, it's time to graduate to Ass Kickin' Habanero Popcorn for real heat.

2. Jamaica HellFire 2 in 1 Hot Sauce is once again on our top-ten list, and high in the rankings as usual. This zesty hot pepper sauce is the brainchild of a Jamaican doctor who uses his own special blend of island seasonings and sun-ripened tropical chiles for incomparable flavor and solid heat level that asserts its presence without destroying your taste buds. 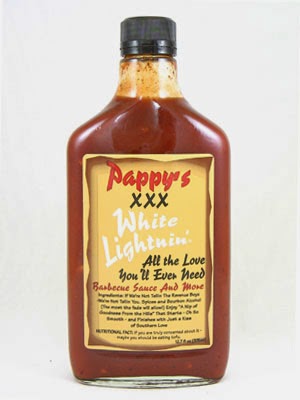 4. Wells Hog Heaven BBQ Sauce slipped a few spots from its usual #1 finish, but continues its domination as our all-time best-selling barbecue sauce. Most people enjoy this thin, spicy (not hot) and tangy vinegar sauce on Carolina style smoked & pulled pork BBQ, but it's also good for marinating chicken or for seasoning cooked greens like collards or kale. 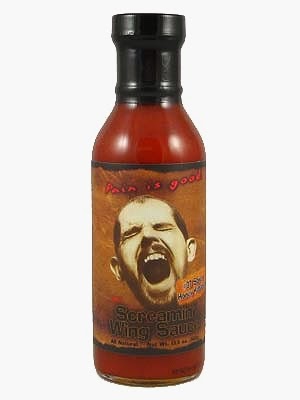 5. Our first of three ties last month featured two newcomers to our list of best sellers: Pain is Good #37 Honey Habanero Screamin' Wing Sauce, a fabulously sweet & spicy hot wing sauce for Buffalo wings, Buffalo shrimp, and anything else you like to slather with or dip into a good hot wing sauce; and Green Ghost Hot Sauce, a powerfully HOT ghost pepper (aka jolokia) sauce made with unripe (green) ghost peppers and habaneros plus jalapeno peppers for extra green-ness and peppery tang.

6. Another tie, this time for the sixth slot, included Naga Jolokia 10 Wing Sauce, an extremely HOT (hence the "10" in the name) Buffalo style wing sauce made with jolokia (aka ghost) peppers, making this sauce ideal for "suicide wings" and other insanely hot appetizers; and Cajohn's Lethal Ingestion Bhut Jolokia Hot Sauce, shown below on the right in its "lab chemical" box. As the name suggests, Lethal Ingestion is an ultra-hot pepper extract made from super-hot jolokia chiles, rendering it too intensely hot to be used in greater than micro-drop quantities. Both of these sauces are new to our monthly top-sellers list, to the best of my recollection. 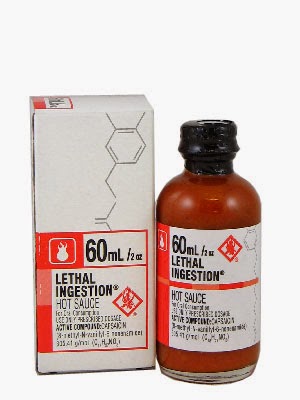 7. Our final tie was between two "regulars" on our list, which also happen to be "old timers" in the ever-changing world of hot sauces and condiments: Matouk's Flambeau Sauce, which is hands-down one of the hottest non-extract sauces on the market but also delivers phenomenally tasty and well-balanced flavors from aged scotch bonnet peppers pureed with West Indian seasonings for an unusually thick, rich texture; and Scorned Woman Hot Sauce, a classic all-purpose savory vinegar pepper sauce made with a variety of hot chilies plus black pepper.

8. Busha Browne's Pukka Sauce dropped one spot from its March finish but continued its history of popularity among people who like to splash some hot sauce on many different kinds of savory food. Savory, tangy and spicy without being overpowering, Pukka Sauce will add zip to everything from scrambled eggs & hash browns to burgers, subs, pizza, wings, nachos, spaghetti, chili, stews, casseroles, stir-fry dishes and more.

9. Ass Kickin' Chile Lime Microwave Popcorn made its best-seller debut this past month with a very respectable ninth place finish. This spicy southwestern style popcorn delivers zesty citrus flavor with just the right amount of sassy chile pepper spice. Chile Lime Popcorn is perfect for snacking along with a frosty margarita or cold beer, as well as with your favorite soda or summery iced tea.

10. Jim's Own BBQ Sauces, Rubs & Chili Mix made it back onto our list of top-selling products. These North Carolina barbecue sauces and versatile dry rubs come in a variety of flavors ranging from traditional Piedmont-style (western NC) tomato-vinegar BBQ sauces in Mild and Hot to South Carolina-inspired mustard barbecue sauce, all-American Smokey sauce and several different barbecue spice blends influenced by Mexican, South African and American cuisines. Jim's Own also makes a hearty, all-natural chili mix (shown on the left) and offers a wide selection of gift baskets and gift sets for any occasion, plus t-shirts with their "best dressed pig" logo and sturdy, roomy two-pocket BBQ grill aprons for the backyard chef.