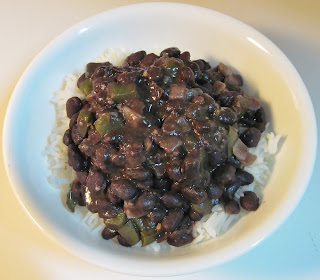 Traditional Cuban black beans--frijoles negros--are made with dried black beans that are soaked overnight, seasoned with pork (traditional Cuban dishes often use lard and pork), and cooked for at least an hour on the stove.  My quick version is vegetarian and takes less than 30 minutes from start to finish, and although the flavor isn't as deep and rich as the slow-cooked pork-seasoned version, it's still quite hearty and satisfying, and certainly lower in fat than the traditional version cooked with lard and pork.

Cubans usually serve black beans over white rice.  If you start your rice cooking just before beginning work on this recipe, both the rice and the beans will be done at the same time--plus you'll have a few minutes to toss together a simple green salad right before they're ready to serve.  Although black beans and rice are substantial enough to serve as a vegetarian main course, in traditional Cuban cuisine they are normally served as an accompaniment to a meat or chicken entree.

My recipe below calls for one 15-oz can of beans to serve two adults (assuming you're serving the beans over rice as main course).  If you want to serve more people, just multiply the recipe accordingly.  And if you have leftovers, refrigerate and reheat the next day, when they'll taste even better, so much so that I sometimes make these quick Cuban black beans the night before I plan to serve them!  Unlike other Caribbean cuisine or many Mexican dishes, Cuban food isn't spicy and doesn't use hot peppers.  But don't let that stop you from splashing some hot sauce on these beans if you're craving heat. 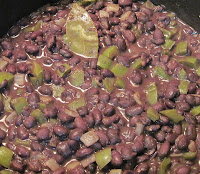 Heat olive oil and bay leaf in a saucepan over medium heat for 2 minutes.  Add onion and saute over medium-high heat until onion is translucent.  Add bell pepper & garlic, saute until softened.  Stir in remainder of the ingredients EXCEPT salt & pepper, cover and reduce heat to low-medium.  Simmer for about 10 minutes, stirring occasionally.  Uncover, taste for balance and season with salt & pepper as desired.  If the beans are too soupy, raise heat to medium-high and cook, uncovered, for a few minutes, stirring occasionally, to allow some of the liquid to evaporate (the beans should have some liquid but not be soupy--see photo).  Remove bay leaf before serving.  To serve, ladle the beans over cooked white rice.

Note:  The ideal side dish to make this an authentic Cuban dinner is fried sweet (ripe) plantains.  And for a Cuban-themed salad, I add chunks of avocado to lettuce, tomatoes & thinly-sliced onions and drizzle with a lime-herb vinaigrette.