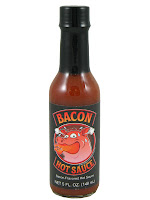 If your motto is, "Everything's better with bacon," then the following three new products are for you.

First, there's Bacon Hot Sauce, created as a result of a discussion among friends over which was better on everything, hot sauce or bacon.  It finally dawned on one of them that the correct answer--at least for them--was BOTH!  Turns out they weren't the only ones to think so, as Bacon Hot Sauce has developed quite a passionate following among people who like to spice things up and wish they could have bacon with every meal.

Bacon Hot Sauce is similar to an all-purpose cayenne pepper sauce, only better:  Cayenne and New Mexico chiles add dimensional flavor along with their relatively mellow heat, and the natural bacon flavor provides that unmistakable smoky meatiness usually found only in cooked bacon.  The end result is a pleasantly peppery, bacony hot sauce that won't burn you out (it's on the mild side for a hot sauce) and that will deliver genuine bacon flavor without any of the fat or calories found in bacon.  If you're a heat-loving baconista, this is a must-have item for your table, kitchen, pantry, purse or computer bag, RV, camping or hiking gear, picnic basket, tailgating supply kit, tackle box, etc. (trust me, you'll want to have a bottle everywhere you eat). 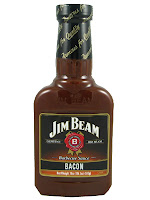 Second, there's Jim Beam Bacon BBQ Sauce, blending three great tastes into one winning combination:  Thick, rich, tomato barbecue sauce; savory grilled bacon, and smooth Kentucky bourbon.  As with the hot sauce, this Bacon Barbecue Sauce lets you enjoy your favorite flavors on all sorts of food without the additional fat or calories found in bacon, and without the alcohol buzz from drinking bourbon (in other words, the whole family can safely enjoy Jim Beam Bacon Barbecue Sauce without blowing their diet or blowing a breathalyzer test).  The heat level is definitely mild--not more than a mere zesty zip that's not hot--and there's enough bold, savory tang to stand up to the most robust grilled fare like ribs, chops and game meats.  But other foods also take nicely to this bacon barbecue sauce:  Slather it on chicken, fish, shrimp, grilled veggies and kabobs, or mix it into meat loaf, baked beans and other recipes for a touch of bacony richness without greasiness.  Bring a bottle of Bacon BBQ Sauce to your next block party or tailgate event to be the hit of the party! 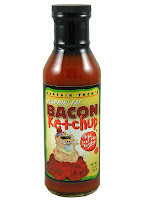 Last but definitely not least, we have Slappin' Fat Bacon Ketchup, for those of us who believe that ketchup is one of the four basic food groups.  As with the other two bacon-infused sauces, eating Bacon Ketchup with every meal is healthier than eating bacon with every meal, because the only thing "Fat" about this bacon condiment is its name.  Beginning with a traditional sweet, tomato-ey flavor and texture, this ketchup veers deliciously away from "ordinary" to EXTRAORDINARY with the masterful addition of natural bacon flavor and a suggestion of rich, bacony mouthfeel.  Pour it on your hamburgers for "bacon" burgers even when you're out of bacon.  Ditto with scrambled eggs, hash browns and other breakfast fare.  Dip your French fries, onion rings and other finger foods in bacon ketchup for an addictively tasty experience.  Add it to any recipe calling for regular ketchup to add heavenly bacon goodness without grease.  Once you try Slappin' Fat Bacon Ketchup, there will be no going back to plain-Jane supermarket ketchup ever again.

Bacon Hot Sauce, Bacon Barbecue Sauce and Bacon Ketchup are all currently on sale at the Carolina Sauce Company.

PS:  If you've read this far, you're probably a bacon addict--which means you'll definitely want to pay a visit to our partner BaconFreak to check out their extensive bacon offerings.  And to experience some of the best bacon on the planet, you'll need to buy North Carolina bacon from our partner Johnston County Hams.