My Very First Brown Stock (and Most Definitely NOT My Last) 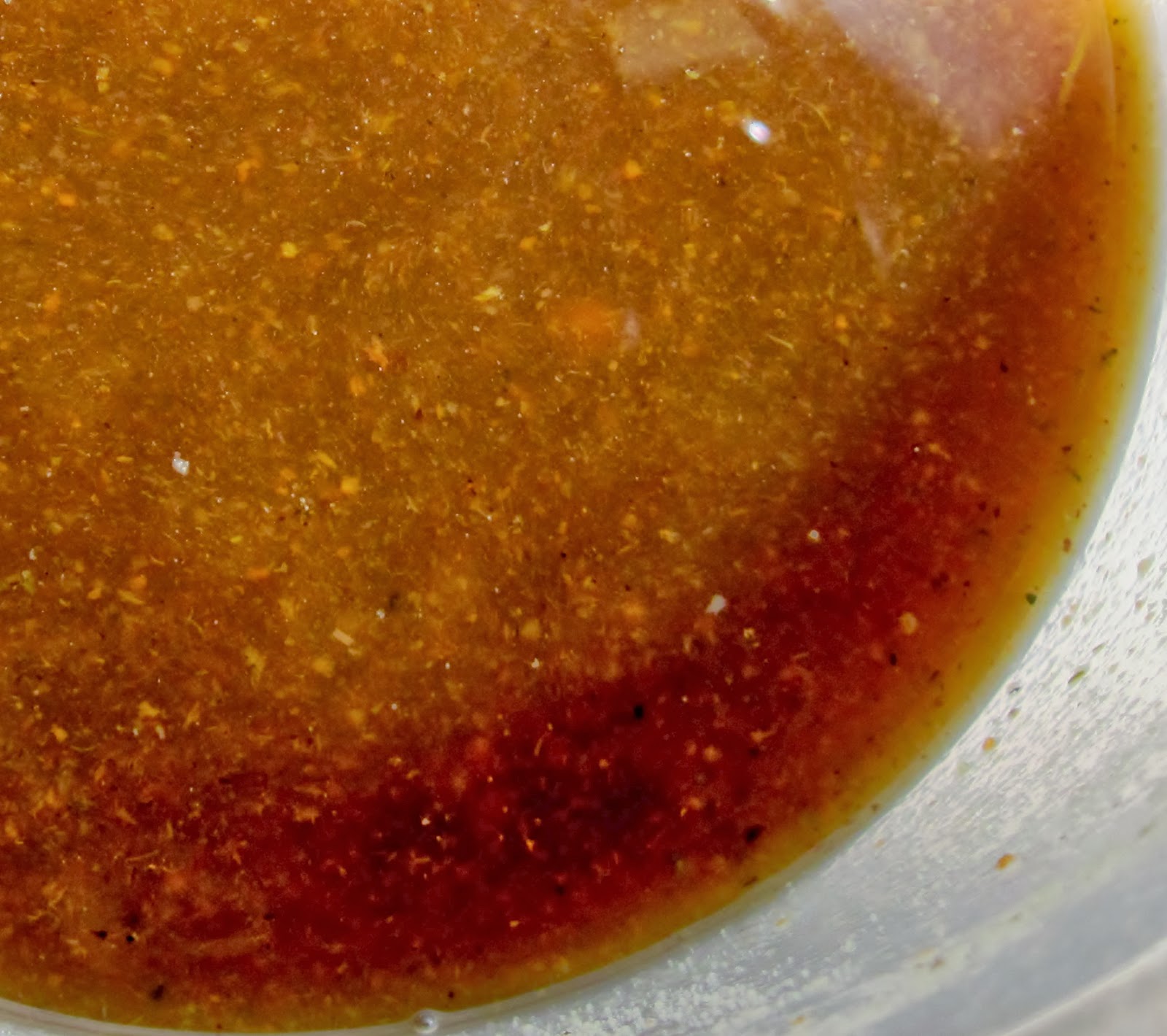 Making stock is one of my favorite ways to spend a rainy Saturday indoors. I've made my own poultry stock for years, freezing "picked" chicken & turkey carcasses along with uncooked necks & wings & backs until I had at least 2 to 3 pounds' worth of bones and parts, then spending the better part of the day simmering them with vegetables, herbs & spices until reduced to liquid gold, then measuring into 2-cup & 1-quart containers for the freezer, to be used in recipes over the following weeks.

Despite my experience with poultry stock, I had never made beef stock or broth -- much less a true brown stock made from oven-roasted meaty beef bones -- until recently. I had several excuses, including a lack of beef bones and a fear of roasting the raw, meaty bones without charring them. Buying half a cow earlier this year eliminated my first excuse, as there were two parcels labeled "soup bones" among the many packets of meat we received from the butcher. Having recently depleted my stash of frozen chicken stock and lacking poultry bones in the freezer, I decided to take the plunge and make brown stock from the beef bones. Thankfully, my fear of over-roasting proved to be unfounded and the resulting brown stock was a smashing success, albeit a two-day process.

I began by reading about brown stock in one of my favorite cookbooks, received as a wedding present over 25 years ago and still one of my go-to references in the kitchen: Rodale's Basic Natural Foods Cookbook. The following recipe is my adaptation of the Basic Brown Stock recipe found on page 110 of that book. The main difference is that I used only beef bones, rather than a combination of beef bones, veal shanks and chicken wings. Although it did take the better part of a Saturday and an additional hour on Sunday to make brown stock from scratch, it was well worth the time and the work involved as the flavor was far superior to that of any canned or boxed beef stock. And because I used meaty bones from grass-fed "de facto" organic beef (not certified organic because the rancher is a very small operation & can't afford the costs of organic certification), there was very little fat to skim off.

A note about my stock: I prefer a vegetable-enriched stock, which is by necessity cloudy rather than clear (see photo above). Instead of discarding the vegetable chunks after straining the simmered broth, I pressed them into the sieve with the back of my metal pot spoon to extract a puree that I stirred back into the soup, leaving the outer onion skins and other fibrous matter in the sieve to be discarded along with the picked bones. Speaking of the bones, I picked all the meat off them to save for other uses, including heating it up with some BBQ sauce for sandwiches or a quick meaty snack. When picking the meat off, be sure to discard any cartilage and fat along with the bones.

Without further ado, here is how I made my very first (and definitely not my last) beef brown stock:

*According to Rodale's, leaving the onions unpeeled will add a subtle sweetness and depth of color to the stock. I cut the root end off the onion quarters and removed any dirty outer skin before placing the unpeeled onion pieces on the roasting pan.

**Leeks are notorious for trapping dirt and grit at the base of the leaves. Be sure to rinse thoroughly under running water, especially after trimming & cutting into chunks - I usually discover more hidden dirt after cutting, requiring further rinsing.

Preheat oven to 425°F. Spread bones in a large (18" x 12") roasting pan and roast for an hour to 1 1/2 hrs, until nicely browned but not burned or charred, turning occasionally for even cooking -- I turned every 15 minutes. When you think you only have 30 more minutes of roasting left, add the onion & carrots to the roasting pan and continue roasting for half an hour. Here's what my roasted beef bones and vegetables looked like when done: 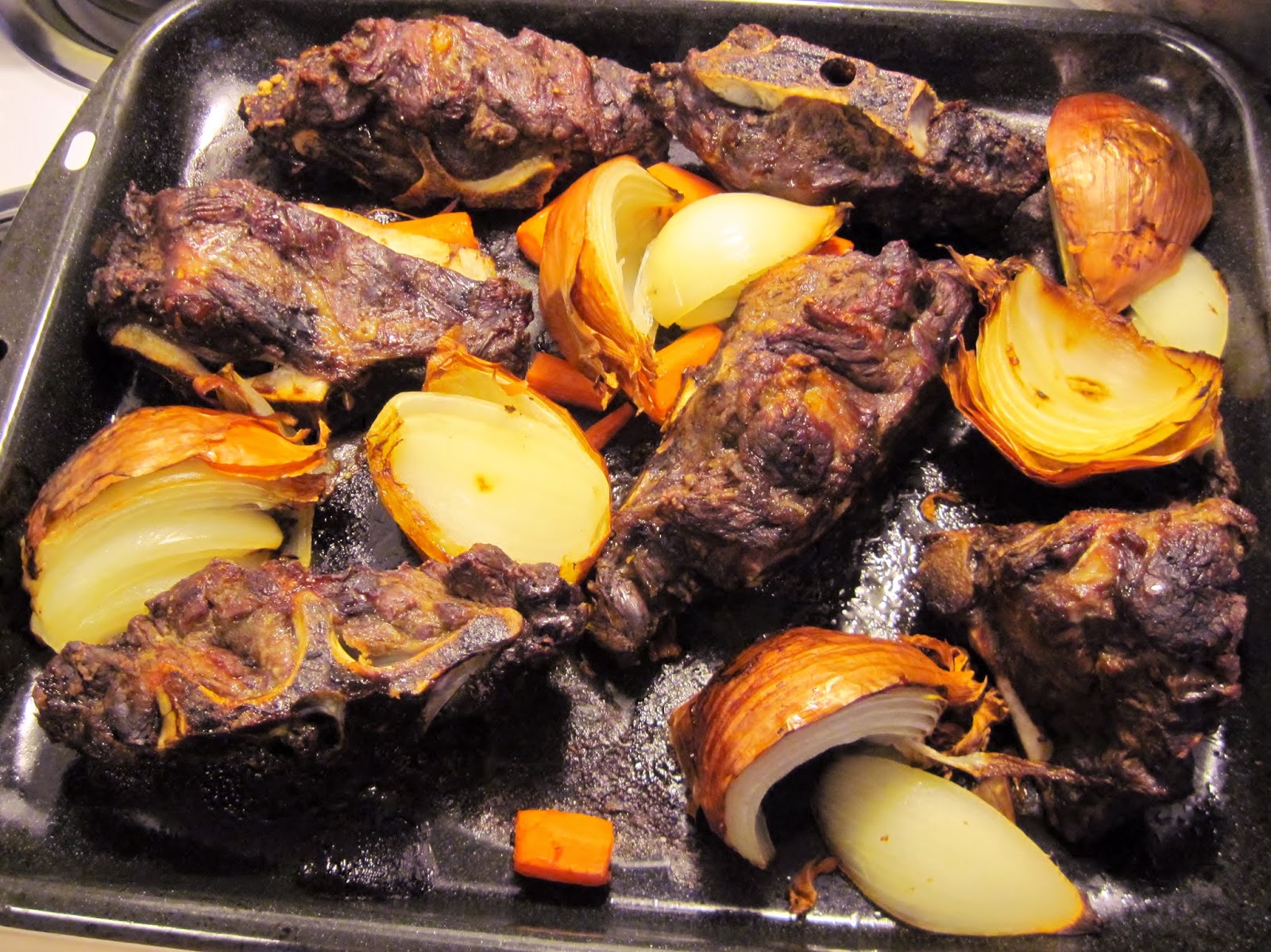 When the bones are deep brown and aromatic, transfer them and the roasted vegetables into a large stock pot (at least an 8-quart pot; mine is a 12-quart stock pot). If there is a lot of grease in the roasting pan, carefully remove the grease using a spoon or turkey baster or syringe, leaving the juicy drippings and crusty bits -- you can see in the photo above that my beef bones did not render much grease at all, so I did not have to remove any.

Position the roasting pan over at least one burner (mine covered 2 burners), turn the burner(s) on to low-medium heat and carefully pour in the 2 cups of water, stirring with a wooden spoon to scrape up the caramelized bits stuck on the bottom of the pan -- this is called deglazing, shown below. It will take a few minutes to unstick and dissolve all the caramelized juices & bits but it is well worth it as they are packed with flavor and will add delectable complexity (can you say "umami?") and robust depth to the stock. 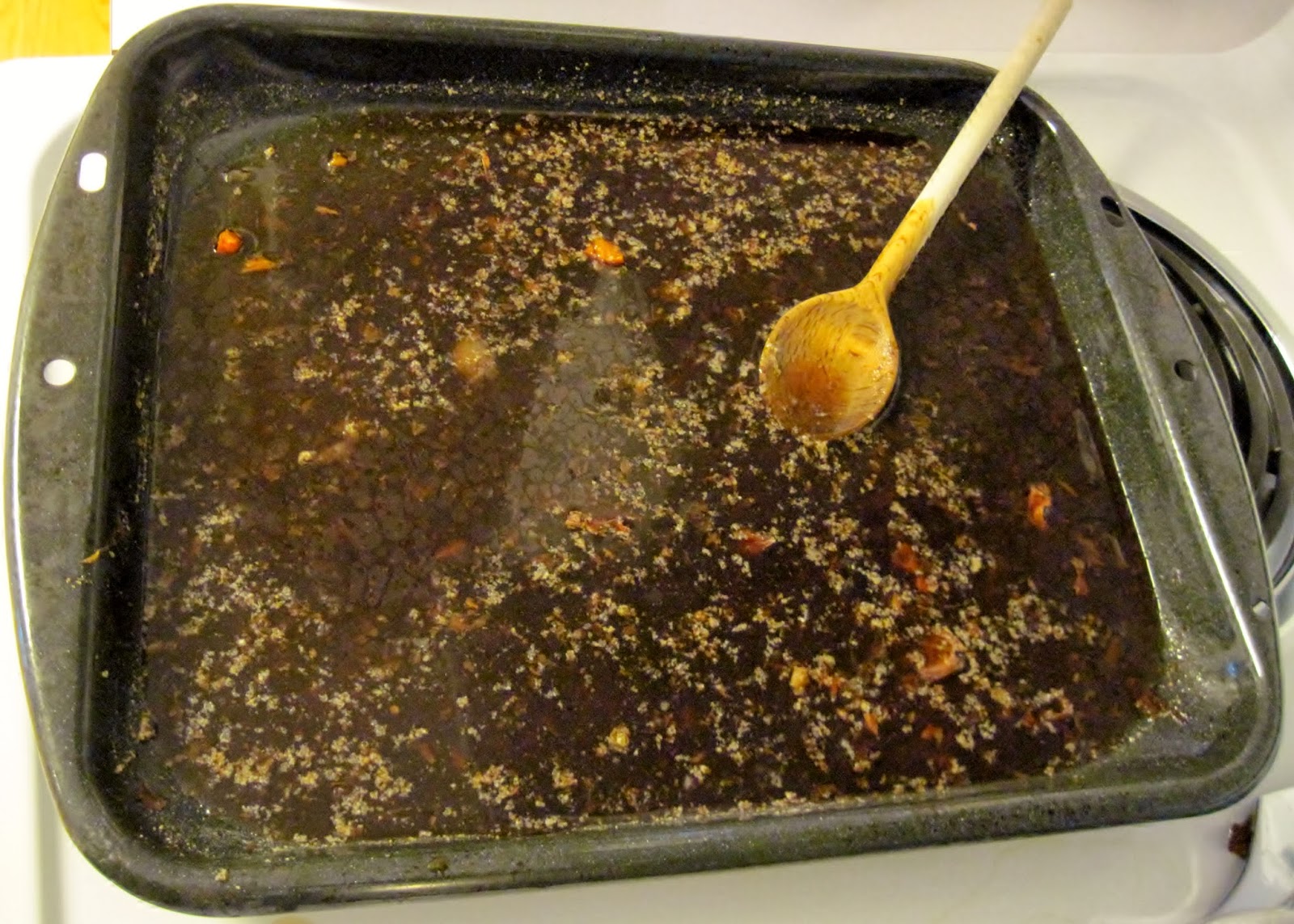 While the roasting pan is deglazing, wash the parsley thoroughly and add it to the stock pot together with the thyme, chopped leek & celery. Once the pan is deglazed, turn off burner(s) and carefully pour the pan juice into the stock pot. Add the rest of the water to the pot, stir and bring to a boil, then reduce heat to keep at a very low simmer. The photo below on left shows the "fully loaded" pot prior to bringing to a boil. 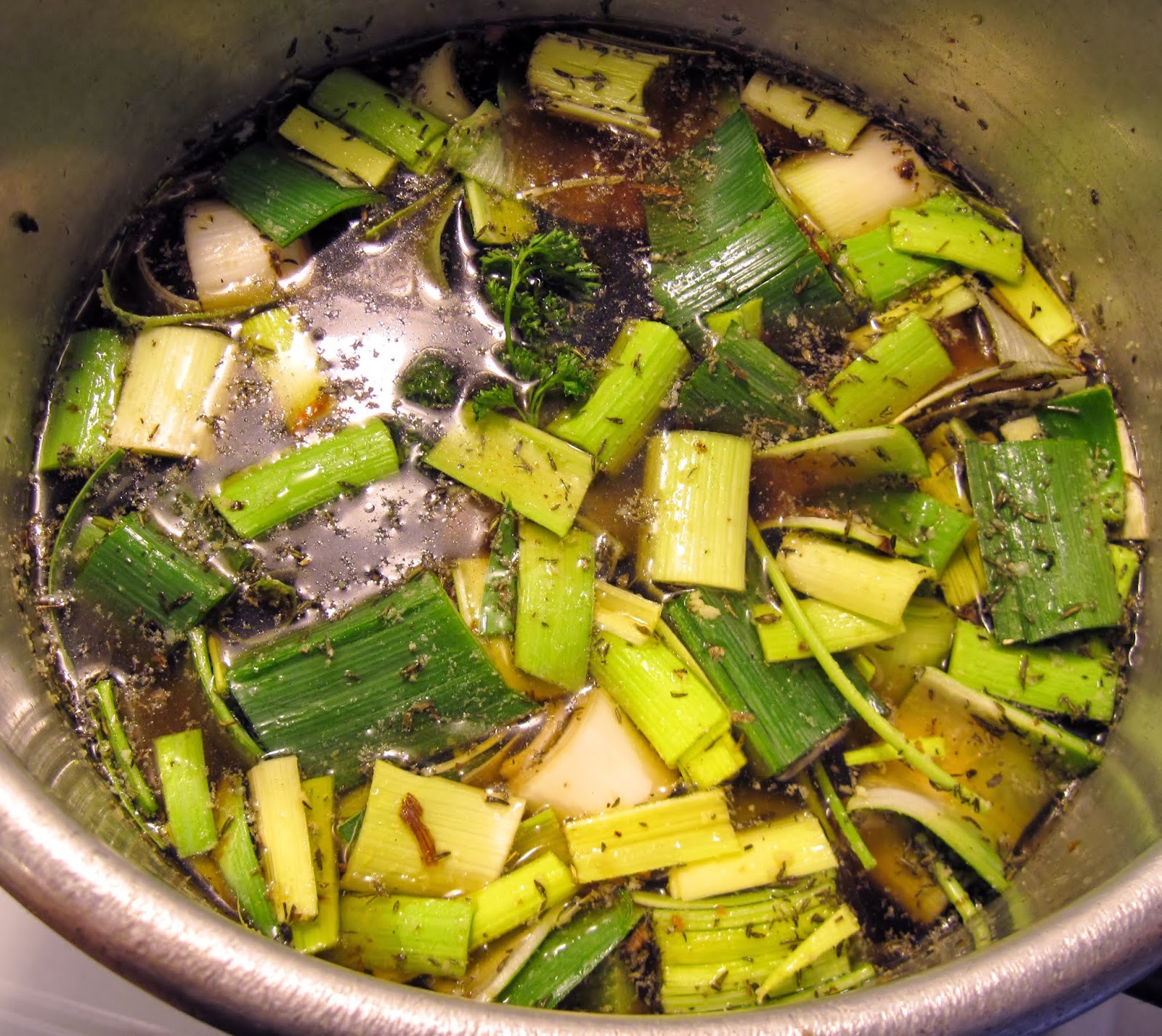 Simmer for at least 6 hours, skimming off any foam that forms at the surface during the first 30 to 60 minutes of simmering. The ideal low simmer has no more than a handful of bubbles gently breaking the surface every 2 or 3 seconds. As the stock simmers, it will reduce in volume so you probably will need to reduce the burner heat gradually to keep the stock from simmering more vigorously or boiling. It's best to allow the stock to simmer undisturbed, without any stirring, so as to allow any froth or fat to rise to the top for easier removal once ready to skim and strain. The photo below on the right shows the gently simmering stock prior to skimming and straining. If you look closely you can barely make out the few bubbles towards to top-right of the photo. 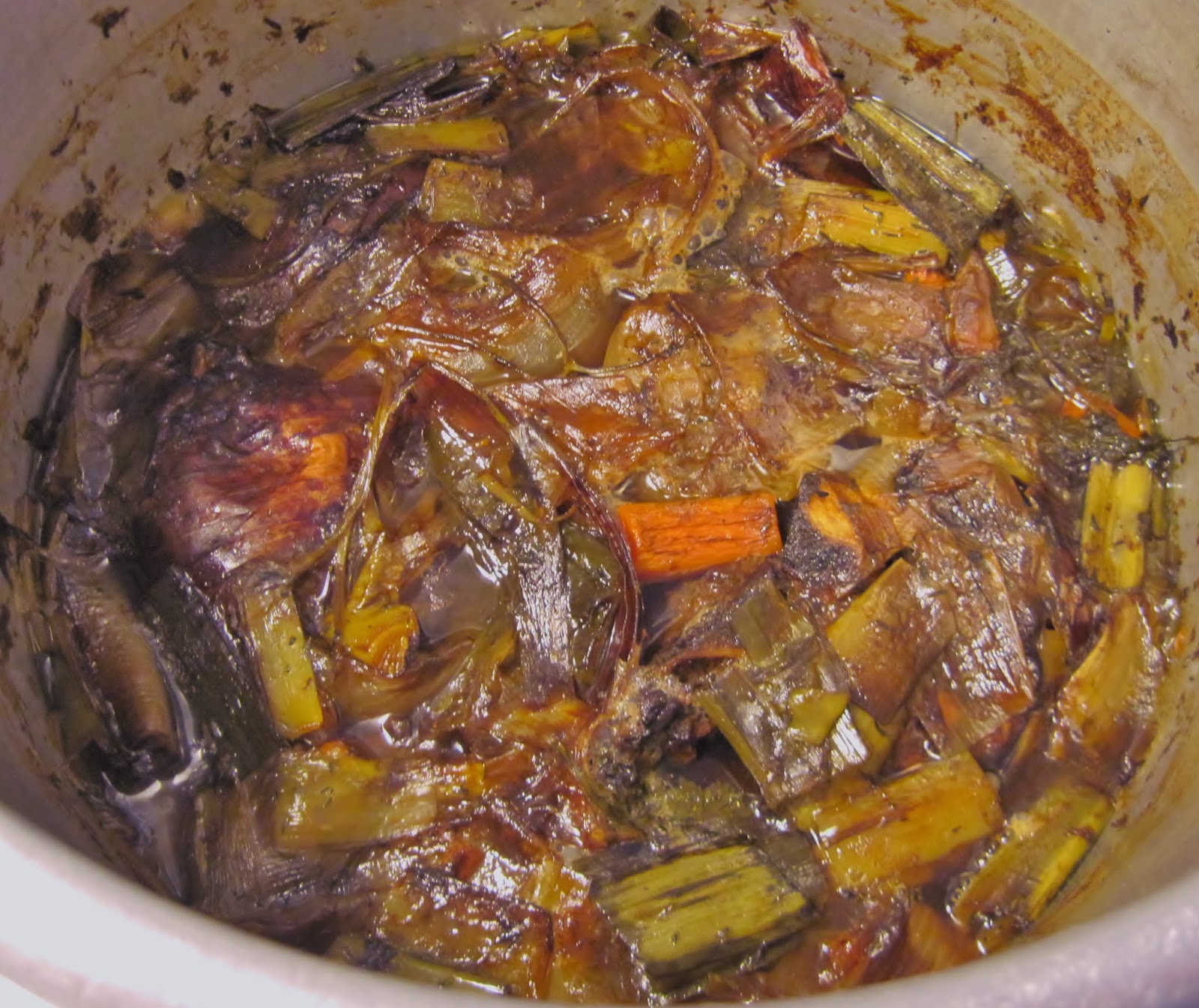 After a good 6 hours or so of simmering, skim off any "scum" or froth from the surface and strain the stock through a fine strainer or sieve into a large bowl or another pot. Reserve the bones for picking off the meat when cool to the touch, and then puree the vegetables as noted above if you want to enrich the stock with the pureed vegetables; Otherwise, simply discard the vegetables. Cover the strained stock and refrigerate overnight -- this will allow the fat to solidify at the top, making it easy to remove the next day.

The following day, remove the solidified fat from the surface of the chilled stock, then ladle the stock into smaller containers for freezing or refrigerating, e.g., 2-cup or 1-quart containers. You should end up with about 2 quarts of very rich, highly concentrated, deep brown stock, as shown in the very first photo at the top of this blog post. To use for soup or as a broth, dilute with equal or slightly greater amounts of water. Note: I do not season the stock with salt or pepper, and this helps to avoid over-seasoning when using the stock in recipes that call for salt and/or pepper. Feel free to season your stock to taste if desired prior to storing in refrigerator or freezer.