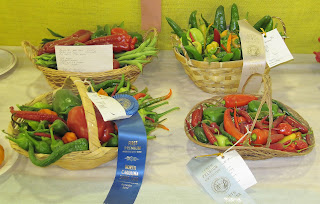 Happy Leap Year, faithful readers! I spent some "downtime" today perusing my cookbooks and food reference books in search of inspiration for dinner. But being too tired to cook after a long week (planning a warehouse move is almost as exhausting as the actual move), I asked my husband to whip something up in the kitchen while I shared a few more interesting tidbits of information about hot and spicy foods, chile peppers, hot sauces, etc. with you.

*Chile peppers (also spelled chilli or chili) are members of the Capsicum genus and the solanacae (nightshade) family, and are thought to have originated in South America although they're now found all around the world. The Aztecs are credited with having coined the name chilli for peppers (the misnomer attributed to Columbus), and used them for medicinal purposes as well as food.

*Paprika is the finely powdered form of red mild peppers, with the seeds and placenta (core) removed. In contrast, Cayenne powder (which may be made using cayenne or tabasco peppers) is much hotter and the entire pepper--seeds and placenta included--is powdered and used. Hungarian and Spanish paprikas differ because they are made with the locally grown peppers of those countries. Hungarian paprika tends to be more piquant, while Spanish and Portuguese paprika have a milder but rich flavor - especially the smoky and delicious "pimenton de la vera " from Spain

*The word "curry" is thought to come from the Tamil word "karhi" which simply means a food cooked in a sauce. Not all Indian curry powder blends use chiles, and they vary greatly throughout the country with hot curries being more common in the southern part of India. In contrast, "Garam masala" is always hot, as "garam" means hot and "masala" means spices--and yes, there are variations in the spices and proportions used in different garam masala blends. Very different curry seasonings, pastes and spice blends are also found in Sri Lanka, Singapore, Thailand, Malaysia and other Asian countries.

*Sambar is a chile seasoning blend and also a chili-based stew common to south Indian and Indonesian cuisine, and consists of dried spices, chiles and dal (legumes including lentils, mung beans, split peas, etc.). Sambal is also from southeast Asia (e.g., Malaysia, Singapore, Indonesia, Philippines, Sri Lanka) but it's a sauce or relish made from chilies, vinegar and salt (sambal oelek), and sometimes also tomatoes and other vegetables as well.

*In Vietnam, eating hot chile peppers is believed to keep mosquitos away. Somehow it doesn't seem to deter North Carolina mosquitoes, which attack me mercilessly each summer despite my substantial consumption of hot chiles. Perhaps I need to add more Vietnamese hot peppers to my diet....

*The hot pepper used in Jamaican jerk seasonings, pastes, marinades and powders is the scotch bonnet pepper, named for its appearance. Scotch bonnet peppers look like squat orange habanero peppers and their intense heat is comparable to the related habanero pepper. While the Walkerswood brand might be the best-known brand from Jamaica, I'm partial to The Shizzle, which is made in North Carolina but following Jamaican traditions.

*Sriracha is a Thai hot chilli sauce that feature garlic and red peppers as the prominent ingredients. Sriracha traditionally is very hot, and is also found in Korean cuisine. An authentic Thai sriracha sauce is A Taste of Thai Garlic Chili Pepper Sauce, and a slightly tamer US version is Dave's Garlic Chile Sauce.

That's enough for today - especially since Greg is telling me that dinner is ready!