Yesterday was another gorgeous Fall day to spend at the NC State Fair, less windy and noticeably sunnier & warmer than last Friday.  Having scoped out the food vendors during my first visit, I had an agenda as I set out on my carbo-loading quest (I play hockey on Tuesday nights, and that's my excuse for eating cupcakes and ham biscuits, which normally aren't part of my meal plan).  I also wanted to try one of the myriad deep-fried items found only on the fair--but only one, so as to not incur a pre-game digestive injury (would that be considered a "lower body injury" in NHL parlance?) 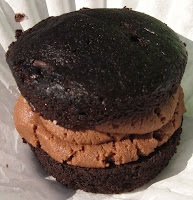 Breakfast was a triple-chocolate "ice cream sandwich" cupcake from Kimmy's Cupcakes:  A light, moist chocolate chip devil's food  cupcake cut in half and filled with densely rich chocolate icing that had a slight crunch of tiny sugar crystals and a hint of coffee.  Because of its size and unconventional construction, this cupcake was best attacked with a fork, which I gratefully accepted from the vendor.  I should have followed his other recommendation and bought some milk to help wash it down. 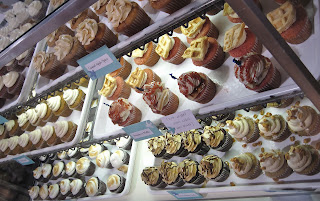 I walked off my sugar buzz by visiting the Kerr Scott exhibit hall, where I stumbled upon another cupcake vendor that was new last year:  Blue Bird Cupcakes.  Last year I sampled their trendy, tasty maple-bacon cupcake, which wasn't on their menu this year.  This time I had their Caramel Apple Spice Cupcake (towards the top of the picture--sadly, both closeup pics of the cupcake came out blurry).  This more traditional flavor combination was even better than the maple-bacon cupcake.  The cupcake itself was a dense spice cake that tasted like Autumn, full of nutmeg, cinnamon, cloves and other pie spices.  The buttercream frosting was dreamy-creamy, dusted with cinnamon and drizzled with a very light (not sticky) caramel sauce.  After a couple of bites I was delighted to discover that the cupcake had a minced Granny Smith apple filling that was similarly spiced and not too sweet, highlighting the tartness of this variety of apple.  The filling complemented the spice cake and deftly balanced the sweetness of the frosting.  Bravo!

Needing shelter from the sun and rescue from additional sweet temptations, I decided to visit the food-free craft exhibit halls, including the NC pottery tent and the Village of Yesteryear: 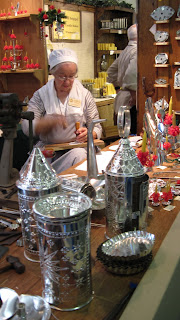 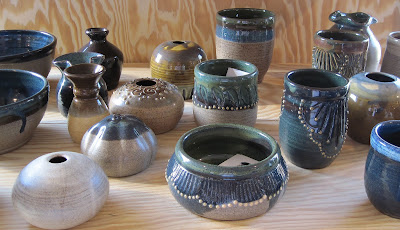 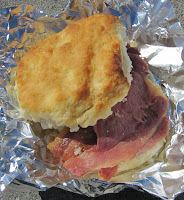 Lunch was a gigantic buttermilk biscuit with country ham, from the NC Farmers' Market Restaurant food truck.  The biscuit had been baked fresh on-site by Miss Debra, who regularly cooks at the Farmers' Market Restaurant in Raleigh.  My biscuit was assembled to order (other filling choices include sausage, egg & cheese, pork chop, PB&J, etc.) and was fresh and hot.  The biscuit itself was a huge, fluffy, buttery pillow with a hint of buttermilk tang, split in half to hold two generously large slices of salty, toothsome, full-flavored country ham that was remarkably lean and completely lacking in gristle.  I've had biscuits from other vendors at the fair, including the popular "Church Row" restaurants, and this one had them all beat.  And did I mention it was HUGE???


After lunch, it was time to look at cattle: 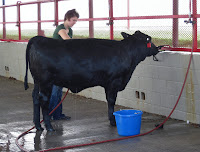 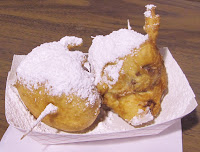 One final indulgence:  Deep-fried Reese's Peanut Butter Cups.  It was well worth the wait to have these fried up on order, as they tasted best while still piping-hot.  The batter smelled like freshly-cooked pancakes and was surprisingly soft & dough-like rather than crispy, but it was not at all greasy.  The powdered sugar was overkill, especially the excessive amount that was dumped on my serving, but that was the only negative mark.

My first bite revealed a melted chocolate-peanut butter center that was warm and gooey and oh so delicious, somehow tastier than a "solid" Reese's cup.  This treat is substantial enough to share as  I was sated after devouring one cup, but I soldiered on and eventually finished the second one.  I was still riding that sugar high later through the entirety of my late-night hockey game... and into the wee hours of the morning, making today a "high caffeine consumption" day out of necessity.

When I head back out to the fair, I'll focus on healthy food options and sample the North Carolina products available from the new group of vendors who've moved in to the "Got to be NC" tent for the second half of the fair.