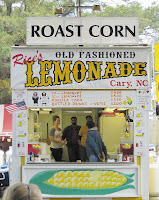 Contrary to popular belief, not everything edible at the North Carolina State Fair is deep-fried.  And the exceptions aren't all sugary sweets or fatty meat, either.  It is indeed possible to find healthy, tasty food and vegetarian dishes at the fair, including roast corn (skip the butter), apples with or without caramel dipping sauce, frozen bananas and strawberries dipped in chocolate, salads, wraps (vegetarian and grilled chicken/meat), and lots of Mediterranean options.  A new vegetarian option this year is the "Flyin' Mayan" sweet potato & black bean burrito from the Gobblin' Gourmet/Gourmet Funnel Cake stand, but I didn't get a chance to try it as they always seemed to have a crowd ordering gourmet funnel cakes.  Instead I decided to try the "Festival Corn" from the booth in the photo on the left, described as whole-kernel corn, chopped tomatoes, chiles, sweet red peppers, jalapenos and spices, served up in a cup.  Unfortunately, they were out of Festival Corn on both days I tried to order it. Hopefully they'll have it again next year, as it sounds spicy-good.

Among the healthy vegetarian food I did sample was a fresh and flavorful falafel wrap from the Neomonde booth:  A grilled pita spread with hummus and filled with their homemade falafel, lettuce, tomato and a light tahini-yogurt dressing.  Also available were similar wraps filled with grilled chicken or beef, shawarma (chicken or beef & lamb), and sides of hummus and tabbouleh.  My wrap was prepared on order, and the lettuce was crispy-fresh.  The falafel was very mild and light in flavor, with enough parsley to give it a pale green color.  The dressing had a nice tang with just enough sesame flavor to complement the falafel.  This turned out to be my favorite of the healthy veggie foods this year.

Later in the day I tried the spinach pie from John the Greek.  I discovered the spinach pie by accident:  It's not listed on the menu at either of their booths, but one of the booths had a tray of spinach pies next to their other Greek offerings.

Also available were grilled portobello wraps, "veggie gyro" wraps (basically lettuce, tomatoes, raw peppers & onions, with the typical fixings), Greek salad, gyros, kabobs, sandwiches and other wraps.  The spinach pie was substantial in size and tasted fine, but it had been sitting under a heat lamp for too long, making the phyllo somewhat rubbery and very hard to cut with the flimsy plastic fork I was given.  While the spinach filling was pleasantly savory, the cheese was mozzarella instead of feta.  But since this was the fair and not a Greek restaurant, I was willing to forgive.

My final healthy, vegetarian meal consisted of the Vegetarian Platter from Party in a Pita.  This dish was quite substantial in size and very filling.  It came with hummus, tabbouleh, pita bread, 4 grape leaves in yogurt sauce (presumably tzadziki but with an odd, slightly sweet flavor), and 2 large falafel in tahini sauce.  To my disappointment, some of the items weren't as good as I recalled them from prior years:  The grape leaves were obviously from a can and very oily although their flavor was pleasantly tangy; the hummus was unusually creamy with a strange bitter aftertaste; and while the falafel had plenty of chickpea flavor it was over-seasoned and too salty.  In contrast, the tabbouleh was EXCELLENT, with a generous amount of fresh parsley and an authentic lemony-minty flavor, diced cucumber and tomato.  The pita bread also was quite good, with a soft texture indicating freshness.

If you want to eat healthy but aren't looking for vegetarian food, a giant turkey leg isn't a bad choice, especially if you share it with a friend.  There are also numerous vendors selling meat and chicken kabobs, salads with or without kabobs, grilled chicken, steak salads, turkey subs and a variety of wraps.  If you can't live without some of the less-healthy meats like ribs or sausage, you can save on calories and fat by sharing them.

But if you must indulge on something sweet, I'll leave you with two suggestions:  First, the Campfire Delight ice cream from the NC State University ice cream booth.  This ice cream was inspired by S'mores, and in my not-so-humble opinion it's even better than the original camping treat:  Graham cracker flavored ice cream with large chunks of semisweet chocolate and swirls of marshmallow cream.  My second decadent dessert suggestion is any type of pie from the Apex Lions Club Restaurant on "Restaurant Row" (also known by some as "Church Row").  Outside the entrance their "barker" drawls that they have "all kinds of p-i-i-i-e:  Apple pie, coconut pie, chock-lit pie, PEEEcan and peh-CON, we have both; sweet potato pie, and lemone [rhymes with "own"] p-i-i-i-i-e...."  Greg and I split a slice of their pecan (or was it peeee-can?) pie.  The only way it could have been better is if it had been served warm with a scoop of Campfire Delight ice cream on top. 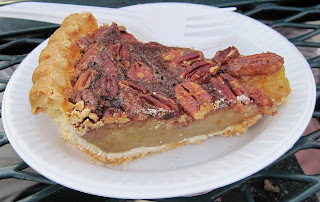 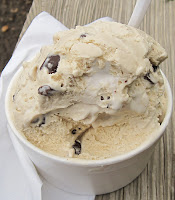