How to Make Cackalacky Chicken Lollipops 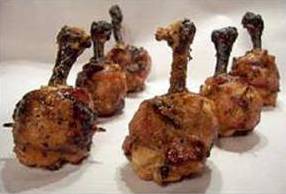 Cackalacky Chicken Lollipops have been featured on the Food Network's "BBQ with Bobby Flay," ABC's "The Tony Danza Show," the Memphis In May World BBQ Championship competition, The American Royal "BBQ World Series" in Kansas City, The North Carolina State Barbecue Championship, and numerous other BBQ competitions and events. Most recently, Cackalacky Chicken Lollipops were featured on the Fine Living Network's "15 Bodacious BBQ's," on which they ranked #2 out of the show's 15 "favorites" from around the country. These tasty morsels make great party appetizers, tailgating snacks, and even a fun main course. Our good friend Page Skelton of Cackalacky agreed to share his technique, complete with photos, so that you can make Cackalacky Chicken Lollipops at home.

First, some background: A chicken lollipop is a chicken wing drumette (the drumstick-shaped portion of a chicken wing) that has been "frenched," which means the meat and tendons have been cut from the lower or thinner end and pushed up towards the top of the drumette to form a ball (the "sucker" part of the lollipop), leaving the lower half of the bone exposed like the stick on a lollipop. To make a Cackalacky Chicken Lollipop, you wrap the ball of chicken meat in bacon, grill, and finish with Cackalacky Spice Sauce. Here's how it's done, in three simple steps:

First, assemble the ingredients:
--A bunch of chicken wing drumettes (available at many grocery stores and certainly from any butcher)
--An equal number of thinly sliced (regular-thickness, not "thick cut") bacon strips
--An equal number of wooden toothpicks, pre-soaked in water for about 30 minutes
--At least one bottle of Cackalacky Spice Sauce

"French" the drumettes by cutting the skin and tendons around the base of each drumette, as shown:

Push the meat up into a ball to make a lollipop shape:

Wrap each ball of chicken meat with a strip of bacon and secure with a toothpick:

Fire up your grill and carefully grill the chicken lollipops over indirect heat, turning or rolling frequently to cook evenly on all sides and avoid scorching. Ideally, use a meat thermometer to know when they're done: the internal temperature should be no less than 175F degrees. Otherwise, the lollipops are fully cooked when the bacon is crispy and the chicken juices "run clear"

When the chicken is done and the bacon is crisp, remove the lollipops from the grill and place them in a large pot. Add enough Cackalacky Spice Sauce to cover, and shake the pot or use a rubber spatula to toss until the lollipops are thoroughly coated. Serve hot. That's it!