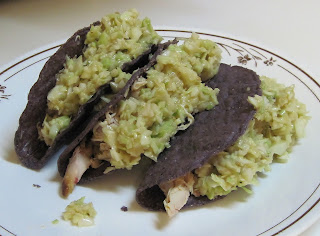 Yesterday was National Taco Day. I had hoped to post this recipe yesterday, but my computer had other plans. However, since most people eat tacos more than once a year--and I bet most folks weren't even aware that there was such a thing as National Taco Day--today is as good a day as any for this recipe.

My inspiration for this recipe was the wonderful BBQ chicken taco I ate at the NC Hot Sauce Contest in early September. It didn't take much arm-twisting to get Greg to smoke a chicken, and I whipped up a very simple slaw while the chicken cooked. If you're pressed for time or don't have a smoker, you could get away with buying a cooked rotisserie chicken and deli coleslaw, then simply pulling the meat off the chicken and seasoning with a NC vinegar BBQ sauce such as George's Barbecue Sauce, and then assembling the tacos as described below. But for best flavor, I recommend buying a fresh whole chicken for smoking, and making the slaw from scratch while the chicken smokes. 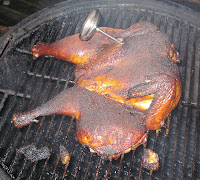 I bought an organic whole chicken weighing just over 4 lbs. from Whole Foods, which rendered enough pulled chicken for up to a dozen or so tacos. Greg started the coals for the smoker and liberally coated the entire chicken with Bone Suckin' Rub. When the smoker was ready, he placed the chicken on the smoking rack and I got to work on the coleslaw. I chopped a small head of organic white cabbage in my food processor until fairly finely chopped. 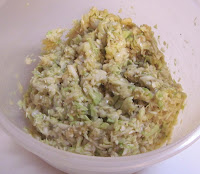 Although I personally prefer shredded cabbage for my slaw, Greg is a fan of chopped slaw, which is, admittedly, easier to serve on sandwiches or tacos. I placed the chopped cabbage in a plastic bowl and added several splashes of vinegar-tomato barbecue sauce (commonly known as Lexington or Piedmont or Western NC BBQ sauce), enough to moisten the cabbage without soaking it. Then came several dollops of mayonnaise, enough to lightly coat the cabbage without turning it into "creamy" slaw. Stir this together and taste for balance, adding a little more mayo or BBQ sauce if desired, or some salt/pepper. Cover and refrigerate until ready to assemble the tacos. 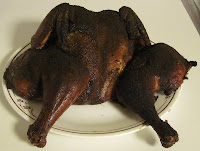 It took about 3 hours in the smoker for the chicken to reach an internal temperature of 165F degrees. Yours may take more or less time--the key is the internal temperature. Once that safe temperature was reached, Greg carefully removed the chicken from the smoker and placed it on a platter to "rest" for about 10 minutes. This rest period will not only allow the chicken to cool off enough for handling, but will also preserve its juiciness. If you're new to smoking, don't be concerned by the blackened appearance of the chicken: This is perfectly normal, especially if using a dry rub that contains sugar. The underlying flesh will be as succulent, tender and richly-flavored as any chicken you've ever tasted. 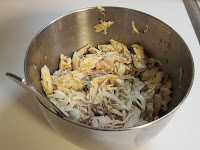 Greg then used his hands to pull the meat off the smoked chicken. This proved to be a very simple, albeit messy, task, since the flesh was literally fall-off-the-bone tender. While Greg was occupied dismembering the bird, I warmed up the taco shells in the oven, set the table, and gave the "marinating" coleslaw a good stir. And while Greg cleaned up after pulling the chicken, I added several splashes of a vinegar-based barbecue sauce (aka "eastern NC" style BBQ sauce) to the pulled chicken and stirred to combine. You'll want to use just enough sauce to add a pleasant tang, so taste for balance and don't over-sauce.

To assemble the tacos, we spooned some of the pulled BBQ chicken into the warmed blue corn taco shells, topped the chicken with a spoonful of slaw, and that was it. If you really want to add cheese or any other toppings, feel free to do so, although we didn't.

If you have a favorite taco recipe, please share, especially if it has an uncommon ingredient or involves an unusual cooking technique.