This recipe is my very first barbecue sauce creation.  It's thick and rich, with a sweet and sassy flavor that gets subtle earthy, oaky notes from the coffee and bourbon, with just a little kick at the end from the jalapenos and cayenne (it's not hot, just a little feisty in its finish).  The bits of minced onion, garlic and pepper create a tongue-pleasing texture.  I still have some ideas for tweaking the recipe a bit, and would love your input, so please make sure to read the Notes after the recipe and leave your Comments on this blog.  We used my coffee-bourbon barbecue sauce on grilled chicken thighs this weekend, and I'm convinced that the sauce would be wonderful on ribs, and possibly even on shrimp, and perhaps as a dipping sauce, too.  I suspect it would be a nice addition to baked beans or meatloaf.  Let me know what you try it on, and what you think about it. 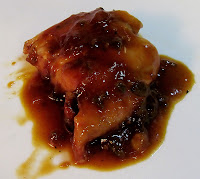 In a medium saucepan combine all ingredients EXCEPT the salt and bourbon, and bring to a low boil over medium-high heat, stirring frequently.  Reduce heat to a low simmer, taste for balance and add salt to taste.  Simmer over low to medium-low heat until thick, stirring occasionally:  This will take about an hour.  As the sauce thickens, it will require more regular stirring and possibly reducing the heat of the burner, too, to keep it below a boil.  When the sauce is almost thick enough to slather, stir in the bourbon and continue cooking until the sauce is reduced to desired thickness (about another 10 minutes).  For best results with grilled food, use this sauce for basting or slathering during the final few minutes of grilling, OR do what Greg does:  Pour some of the sauce into a large heat-proof bowl, add the fully-cooked grilled food to the bowl and toss in the sauce until evenly coated.  This method prevents the sauce from burning on the grill, and is what we did for the chicken thighs (see photo above on right).

Gloria's Notes:  For a more robust sauce, I'm considering re-working the coffee & water amounts to 3/4 cup each.  To cut back on fat while still preserving the satiny mouthfeel of the sauce, I might reduce the butter to just 2 Tablespoons, especially for use on ribs or in recipes like meatloaf.  Another idea I have is to use molasses instead of brown sugar for earthier flavor and less sweetness, but this would probably require a reduction in the liquid ingredients (water, coffee).  For a hotter, spicier sauce with more of a zesty bite, I'd probably increase the amount of cayenne pepper and possibly even add a little ground dried habanero, and double the amount of garlic.  If you make this coffee-bourbon BBQ sauce or any of my suggested variations, or even your own variations, please do leave a comment to let me know how it turns out.

PS:  This sauce keeps well in the refrigerator - use a lidded glass jar - and in fact the flavors are better the next day after they've had a chance to meld and develop.  You can probably also pressure-can it for longer-term storage, although I haven't tried that.