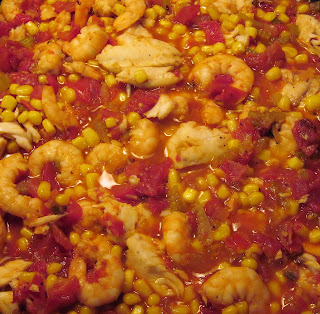 Jambalaya is a traditional Cajun dish that's made many different ways, ranging from zesty to fiery in heat, and involving one or more types of meat such as sausage, chicken, ham, shrimp or other seafood. Tomatoes and classic Cajun seasonings are common ingredients in most Jambalaya, and the dish usually is served over cooked white rice or has the cooked rice stirred into it before serving.

My Jambalaya is a little different--and perhaps crazy by Cajun standards. Instead of using Andouille sausage, ham or chicken, my Jambalaya uses only seafood, namely shrimp and fish (I use tilapia or catfish, since both are readily available from local sources in North Carolina). That's not too crazy, you may be saying. Fine, here's the crazy part: There's beer AND wine in my Jambalaya, but no rice. Instead, my Jambalaya replaces the rice with corn, which is a whole grain, unlike white rice.  Of course if you've got to have rice with your jambalaya, you can serve my Crazy Jambalaya over cooked rice.

Here's my recipe for Crazy Corn & Seafood Jambalaya, which makes four servings--or six if served over rice. Feel free to modify the amount and type of chile pepper and hot sauce to suit your taste and heat tolerance.

Ingredients
1 12-oz bottle or can of beer (nothing fancy, a light beer is fine)
2 1/2 cups water
1/2 cup crab boil seasoning 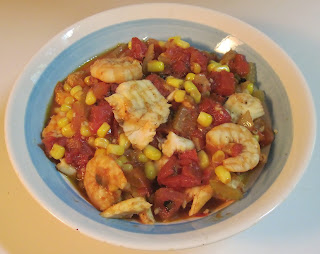 In a large pot with a lid and steamer basket (remove the basket for now), combine the beer, water and crab boil seasoning. Bring to a boil, then add shrimp. Bring back to a low boil and cook shrimp until just done (pink). Remove pot from heat, and use a slotted spoon to scoop out the shrimp and place in a shallow bowl to cool to the touch. Reserve the crab boil liquid in the pot for steaming the fish later. When the shrimp is cool enough, peel and devein. Set aside.

In a large, deep saucepan with a lid, saute the celery, onion, garlic and jalapeno in the fat until softened. Add the tomatoes and saute until they've softened. Stir in the canned tomatoes with liquid, wine, Worcestershire sauce and hot sauce. Bring to a boil, reduce heat, cover and simmer for about 15 minutes (it's ok if it goes longer). While this is simmering, steam the fish: Bring the crab boil liquid back to a boil, place the fish in the steamer basket, place the basket in the pot and cover. Reduce heat but keep the liquid simmering, and allow the fish to steam until just done (you can flake it with a fork), about 5 minutes or so depending on the thickness of the filets. Don't worry if you uncover the pot and the fish isn't done yet; merely turn up the heat a bit to bring the liquid back to a gentle boil or simmer, re-cover and keep steaming for a minute or two more. When the fish is just barely done, remove from steamer basket and set aside with the shrimp.

Back to the tomato mixture: Uncover the saucepan, stir in the corn, raise heat to a gentle simmer and cook, uncovered, for a few minutes until corn is hot. Stir in the shrimp and fish, continue to simmer uncovered until heated through, stirring a bit to help the fish flake into chunks. Taste for balance and season with a little salt & pepper (or with Slap Ya Mama Seasoning) as desired. You can also add more hot sauce for a spicier dish--this recipe is mild-to-medium spicy as written. Serve in bowls, with or without cooked rice.