Not Your Grandma's Fried Chicken Giblets 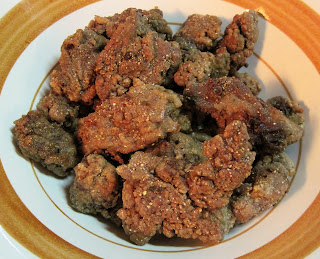 Chicken and turkey giblets--the livers, gizzards and hearts that come in a little packet tucked inside a whole bird--are often destined for either the gravy pot or the trash bin, unless you're one of those people who enjoys them fried. There seem to be far more of these enlightened folks here in the South, where you can still find fried livers and gizzards at diners, country restaurants and other joints.

If you're a liver-hater, I commend you for reading this far. Before you leave this post, I humbly ask you to keep reading and, if you're brave, to give this recipe a chance. You just might end up changing your mind about lowly giblets.

Properly prepared, fried giblets are a true delicacy: richly-flavored tender and nutrient-dense morsels enrobed in a crunchy, golden-brown breading that is free of excess grease. The livers should practically melt in your mouth, while the gizzards and hearts will have a firmer, more toothsome but not tough texture that yields to your bite.

Because gizzards and hearts are denser than livers, most recipes call for simmering the hearts and gizzards for an hour or two before breading and frying, while livers can skip that step. My recipe is a little different.

Inspired by a recipe I found in White Trash Cooking (one of the very first cookbooks I ever bought), I decided to try marinating the livers, gizzards and hearts in a little red wine instead of simmering them. My choice of breading also differed from that in the cookbook--but I must confess to frying in bacon grease rather than oil, using one of my well-seasoned cast-iron skillets.

Unless we're making gravy, Greg and I freeze the giblets when we buy whole chickens and turkeys. When I decided to make this recipe I had exactly a half-pound of mixed turkey & chicken giblets. If you like livers but don't care for the hearts or gizzards, by all means try this recipe using just livers. And yes, you can double or triple the recipe.

My livers turned out to be the best fried livers I've ever had, crunchy on the outside and velvety-tender on the inside, with nary a drop of excess grease. The hearts and gizzards were noticeably firmer but good nevertheless. The next time I make this recipe, I'll marinate the livers separately for an hour, while letting the hearts and gizzards marinate for an additional hour to see if that further tenderizes them.

Without further ado, here's my recipe for what I'm calling "Not Your Grandma's Fried Chicken Giblets," based on "Liver-Hater's Chicken Livers" from White Trash Cooking:

Ingredients
1/2 lb chicken and/or turkey livers, gizzards and hearts (or any one or two of those)
1/2 cup red wine (I used a merlot-shiraz blend)
Salt & pepper to taste
1/4 cup cornmeal
1/4 cup all-purpose flour
1 1/2 tsp dried thyme
1/2 tsp garlic powder
1/4 tsp salt (use more if you prefer a saltier breading)
Oil (not olive oil) or bacon grease for frying

Use a filet knife to trim the giblets of any membranes and to remove any dark bits attached to the livers. Cut the giblets into 1" pieces, place in a glass or ceramic bowl, season lightly with salt & pepper to taste and cover with the red wine. Allow to marinate for 1 hour in the refrigerator--if you prefer, marinate the liver separately for 1 hour while letting the gizzards & hearts marinate for two hours.

When you're ready to fry, add enough oil or bacon grease to your frying pan or skillet (preferably cast-iron) to cover the bottom, ideally 1/4" deep or so, and heat over medium-high heat.  Combine the cornmeal, flour, thyme, garlic powder and salt in a resealable plastic bag, shake off as much marinade from the giblets as possible and place in the bag. Seal and shake to coat the giblets thoroughly. Remove from bag and carefully place the giblets in the hot fat, frying for several minutes on each side until golden-brown (the livers may cook faster than the hearts and gizzards). Don't over-crowd the skillet; you may need to fry in batches. Drain the fried giblets on paper towels and enjoy while hot. They're quite tasty as-is, or with a few splashes of hot sauce, or even with cocktail sauce or tartar sauce.

For a Spicy Variation: Substitute 1 tsp of Slap Ya Mama Cajun Seasoning for the garlic powder and salt in the breading. You can also substitute dried parsley or dried oregano (use 1 tsp) for the dried thyme.