Before I headed out the door on Wednesday evening to go sing at a service, I asked Greg if he could take care of dinner by either whipping something up in the kitchen or picking up some takeout. My only specific request for the meal was that it be based on fish or seafood, or be meatless.

When I walked inside the house a few hours later, tired and hungry, I was greeted by an intriguingly exotic, almost voluptuous aroma of coconut, ginger, curry spices and piquant chilies. Delighted and intrigued, I asked Greg what was for dinner. His reply:

"I had an incredible vegetarian Kerala stew served over appam* when I was in Bangalore. This is fairly close, but they had added a few other vegetables, broccolini and okra I think. They served the appam pancake on a banana leaf, and then spooned some of the stew onto it. The pancake absorbs the liquid, and you tear off bits of the pancake to eat the stew. I decided to make a fish stew instead. Appam is a multi-day exercise so that's for another time."

*Note:  Appam is a South Indian flat bread or pancake made with fermented rice batter and coconut milk.

Greg's Kerala Fish Stew was absolutely fantastic, albeit somewhat decadent if you are a traditionalist when it comes to Lenten dining. The stew had a luxuriously velvety mouthfeel with a subtle curry flavor, hints of sweetness from the coconut and a mellow nuttiness from the ghee (Indian clarified butter). Both the fish chunks and the vegetables were tender but not mushy, and the creamy liquid tempered the fiery bite of the serrano chiles to produce an overall gentle heat with an occasional medium-hot spoonful. Although we happily devoured our stew in bowls with a soup spoons instead of the traditional appam on a banana-leaf "plate," it could easily as well have been enjoyed over rice, Asian noodles, or, if you have the time or live near an Indian bakery, served over appam or with other Indian flatbread.

The following is Greg's recipe for Kerala Fish Stew.  Ginger paste and ghee are available at Whole Foods and similar supermarkets, at some gourmet or specialty-foods shops, and in Indian grocery stores and other ethnic markets. If unavailable, you can substitute finely grated or minced fresh ginger for the paste, and clarified butter, vegetable oil or canola oil for the ghee (regular butter won't work because of its low smoke due to butter solids). And if you have access to fresh Indian chilies, by all means use those instead of the serrano peppers -- just be sure you're familiar with their heat! 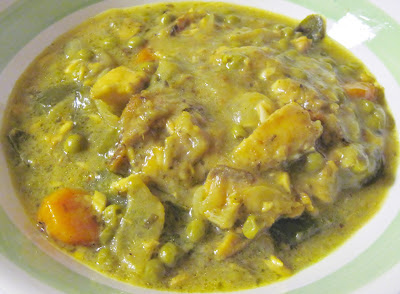 Heat a small amount of ghee in a large, deep saucepan over medium heat.  Add the onion, carrot, ginger & spices and saute until the onion is translucent and the carrot is just tender, stirring frequently.  Place fish chunks on top of vegetables and let cook for a few minutes, turning the fish pieces over when partially cooked.

While the vegetables and fish are cooking, combine the 1 1/2 Tbs ghee and the flour in a small pan over medium-high heat to make a thick paste or roux. Cook until slightly brown, then slowly stir in just enough coconut milk to make a thick paste and cook, stirring constantly, for 2 or 3 minutes. Add this paste to the stew (a silicone spatula or wooden spoon is ideal for this task), stir in the rest of the can of coconut milk, then gently fold in the chilies & bell pepper. Cover, reduce heat to low and simmer for 45 minutes. A few minutes before serving stir in 1/2 cup peas and continue cooking until heated through. Makes 2 or 3 servings.

PS: If you enjoy Indian food and are interested in trying other Indian recipes, be sure to follow our "Indian Recipes" board on the Carolina Sauce Pinterest site!