Email ThisBlogThis!Share to TwitterShare to FacebookShare to Pinterest
Have you been tempted by the strange-looking dried chili peppers in your grocery store, but intimidated by the lack of information on what to do with them if you bought them? Or have you been seduced by one or more of these exotic dried chilies and brought them home, only to have them leaving you frustrated and unsatisfied in the kitchen? Don't worry, I'm here to help with some tips on using dried chili (or chile) peppers!

First, while all dried chilies are... well... wrinkled and old-looking, you still need to know how to avoid the bad ones. Stick to dried peppers that have somewhat shiny skins with dark red or maroon or deep brown or black-brown color, have long uniform pods and are free from signs of mold or decay. Also avoid ones that look gnarled or withered, as opposed to merely crinkly or wrinkled. You can store dried chile peppers in a cool dry place for around 6 months, or for longer in an airtight container in your freezer. Before using, make sure to remove any dust or surface dirt by either wiping the dried peppers with a paper towel or rinsing them with water.

In general, you'll need to rehydrate dried chili peppers before using them in most recipes. An exception is when you want to add dried chile peppers to stews, soups, casseroles or moist meat mixtures that will cook for at least half an hour. In those applications, you can just go ahead and add dried chopped peppers directly without rehydrating them, since the moisture and long cooking time will do the job for you. Some recipes might also recommend toasting dried chile peppers as a first step, to intensify their flavor. You can toast dried peppers by placing them in a roasting pan in the oven (set around 350 degrees or so) for a few minutes, or using a hot, dry heavy skillet on the stove and pressing the dried peppers down to toast each side for a few minutes. Either way, check the peppers regularly to prevent burning, which can give them an unpleasant bitterness.

If you're concerned about how hot the dried chile peppers might be, you can slit them open and remove the seeds (shake them out or brush them away) prior to rehydrating or toasting. Alternatively, you can rehydrated them first to soften, and then cut open and use the tip of a knife to get rid of the seeds and stems. Kitchen shears can be quite helpful in slicing dried or rehydrated chile peppers.

Once you're ready to rehydrate the peppers, place them in a bowl and pour very hot water over the dried peppers to cover. If the chilies won't stay submerged, place a saucer or other lid over the bowl to hold them down. Soak the dried chiles for at least half an hour, and ideally for 1 hour. You'll notice that the peppers will have softened and swelled, and that some of their original color will have been restored. Drain off the soaking water, saving some of it if your recipe calls for pureeing the rehydrated chilies. Cut off any stems, cut open and remove seeds if desired, and then chop or slice as called for by your recipe. If pureeing, puree the rehydrated chiles in a food processor or blender using some of the soaking water. You can then press the puree through a sieve to remove any unwanted seeds or to get a finer texture. 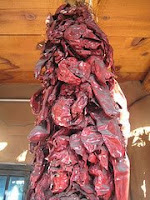 Some of the more common dried chili peppers include the Ancho, which is very wide especially towards the stem end (ancho means wide in Spanish), deep dark red or maroon in color, and mild to medium hot; Pasilla, which is long and of the same relatively narrow width for the entire length of the body, with a dark brown color and very hot; Chipotle, which is a smoked, dried jalapeno, brown in color and hot to very hot with smoky flavor; De Arbol, which is small and very slender, intense red in color and resembles a dried cayenne pepper but its skin is less wrinkled.

You can make a simple but potent chili sauce for tacos and enchiladas by pureeing rehydrated chilies (a combination of Ancho and Pasilla works well) with some of the soaking water, a clove of garlic and a pinch of salt. You can also add a bit of oregano and cumin for a more complex flavor.

So don't fear the dried chiles in your produce section - bring some home, and discover a whole new world of intensely zesty, pungent and spicy flavors!

PS:  If you're an experienced chili pepper handler and eater who enjoys fiery foods, check out our new dried jolokia pepper (ghost pepper) pods, now on sale at the Carolina Sauces online store!