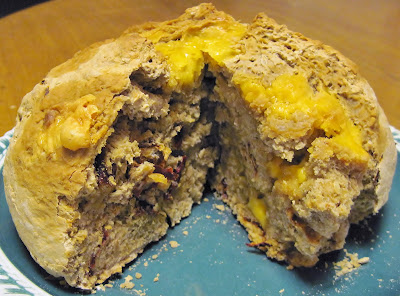 A while back I posted my recipe for Spicy Chile-Cheese Beer Bread, an easy "quick bread" that doesn't require yeast or rising and can be made from start to finish in well under 2 hours.  Since that original posting, I've made it twice with variations in a few of the ingredients, namely the types of dried chiles, beer, and cheese used.  That's one of the charms--and fun--of this recipe: You can change it up a little to vary the flavors and the spiciness.   In fact, you can even make the recipe using fresh hot peppers instead of dried, as you'll see in the one of the comments to the original post referencing a Jalapeno-Cheese Beer Bread recipe.

My first variation to the original recipe is described in the second postscript to my original post.  My most recent variation, however, was more significant and thus deserves this separate post.

Being out of whole-wheat flour but wanting to add some fiber and whole-grain goodness to my chile-cheese beer bread, I decided to replace some of the white flour with oat flour.  To make the oat flour, I processed just over 1 1/2 cups of old-fashioned (not instant or quick-cook) rolled oats in my food processor until finely ground.  This made 1 1/2 cups of oat flour, and I replaced the same amount of white flour in my recipe with the oat flour.  The use of oat flour resulted in two important differences as discussed a little later.

The other changes I made were less impactful:  For the dried chiles I used one Ancho chile and one New Mexico chile, and I included some of the seeds along with the chopped chiles.  This resulted in a somewhat spicier bread, at least when eating a piece containing seeds, and the different flavors of the two peppers could also be tasted, for a pleasant contrast with almost every bite.  As to the beer, I used a bottle of Guinness, which imparted a mellow, malty flavor to the bread.  And for the cheese I used an inexpensive but flavorful sharp cheddar from Whole Foods.  Finally, I decided not to brush the top of the unbaked bread with egg wash, and the result was a "rougher," lighter, more rustic-looking crust as seen in the photo on the top left, as opposed to the smoother, softer, more golden and shinier crust you get if you brush the top with a beaten egg.

Now for the important differences I noticed as a result of the oat flour:  First, the dough seemed "wetter" and thus required a little extra flour to be worked in before it was ready to bake.  I simply kept adding a handful of white flour at a time and working it into the dough until it felt right (stiff but still pliable and no longer sticky but not dry - you'll know the feel if you bake bread fairly regularly).

The other significant difference was the baking time:  After 65 minutes in the oven, the bread was still a little underdone in the middle.  My advice is to bake for at least 70 minutes, and maybe even a little longer depending on your oven, if you decide to replace some of the regular flour with oat flour.

If you make my Spicy Chile Cheese Beer Bread or try a variation of your own, please feel free to post a comment and share your recipe!