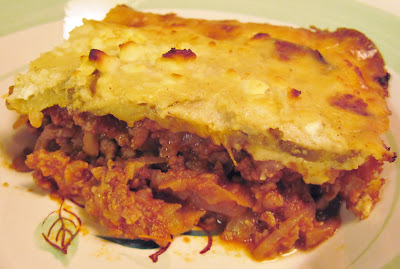 I call this my meat-lover's moussaka because it's made with more beef and less eggplant and custardy white sauce, and there are no potatoes, no sugar, and no breading on the eggplant. In other words, if you're looking for a high protein, low-carb moussaka, this recipe should work for you.

My moussaka recipe is based on traditional Greek moussaka, except that I use beef or even ground venison instead of lamb (feel free to use lamb instead of beef for some or all of the ground beef if you prefer). I also simplify assembly by making only one thick meat layer sandwiched between two layers of eggplant. But you can use 2 eggplants instead of 1 if you want more, thinner meat layers with more eggplant between them.

One last note: As with pretty much any Greek moussaka, this recipe does take some time to prepare and cook (a good 2 hours total time, maybe longer) so plan accordingly. On the plus side, you can refrigerate leftovers to serve at future meals.

*I used naturally-raised 100% grass-fed beef, which is very lean. If you use conventional ground beef, you may need to drain off excess fat after browning.

**I warmed the milk in my microwave oven. Regardless of how you warm it, make sure the milk does not boil!

Spray or brush olive oil on 2 large shallow baking sheets and a 9"x12x2" baking dish (or similar dimensions). Preheat oven to 375°F, spray or brush eggplant slices on both sides with olive oil and place in single layer on the baking sheets. Season to taste with salt & pepper, then bake until golden and lightly browned, turning once to brown both sides. Remove from oven and place eggplant slices on paper towels to absorb excess oil and moisture.

Heat 2 Tbs olive oil over medium-high heat in a large, deep skillet and saute the onion & garlic until soft and translucent. Add ground beef and brown the beef, stirring regularly to break up clumps of meat. Once the beef is browned, drain off any excess fat, add the tomatoes, oregano, bay leaves & cinnamon, season with salt & pepper to taste, stir to combine, then reduce heat and simmer for about half an hour, stirring occasionally, until most of the liquid has evaporated and the beef is fully cooked.

At this point I like to assemble the moussaka before making the creamy, custard-like bechamel sauce topping so as to avoid scorching or curdling the sauce. To assemble the moussaka, place a single layer of eggplant slices at the bottom of the greased baking dish, leaving as little exposed of the bottom as possible. Spoon the beef mixture evenly over this eggplant layer and top with the remaining eggplant slices, ideally covering the beef completely.

To make the sauce:  Melt the butter over  medium-high heat in a saucepan. Slowly stir in the flour and cook, stirring constantly, to make a light golden roux and the mixture begins to produce a lightly nutty aroma signaling that the flour is fully cooked. Slowly pour in the warm milk, stirring constantly (a whisk is great for this) to prevent any lumps. Continue to cook, stirring constantly, until the sauce thickens and coats your spoon or whisk well. Remove from heat, continue to stir or whisk as you add the nutmeg, pepper, and salt to taste, then stir or whisk in the egg yolks until completely incorporated and the sauce is well-mixed and thick.

Pour the sauce evenly over the top of the assembled moussaka, using a spatula if necessary to get as much out of the saucepan and spread as evenly as possible. Sprinkle evenly with crumbled feta cheese, then bake at 375°F until the sauce has set, the cheese has melted and this top layer is light golden-brown (about 35 to 40 minutes).